Cataloguing the Library's collection of tracts and pamphlets

The Library was awarded two grants from the Research Resources in Medical History scheme set up by the Wellcome Trust. These awards enabled the College to catalogue approximately 26,000 out of a total of around 28,000 of its collection of tracts and pamphlets. The remaining items were catalogued in the final phase of the project that commenced in May 2007, also funded by the Wellcome Trust, to catalogue the printed collections from 1800-1849 online.

The initial project began in 2002 and the second phase concluded in June 2006 after the addition of c. 26,000 records to the Library’s online catalogue, Heritage Collections.

The bibliographic records covering the tracts and pamphlets are now also available via the Copac academic and national library catalogue - see “Access to the collection” below for further details.

Benefits of the Project 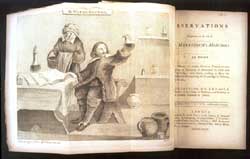 Use of the tracts has been difficult because they are bound by size rather than subject and listed only on terse, hand-written catalogue cards. Cataloguing the collections has revealed the contents of the collection by creating online descriptions for all the tracts.

Recognised standards were followed in cataloguing. Every record has subject headings from the National Library of Medicine's thesaurus, allowing the discovery of previously unknown material. Many of the tracts are presentation copies and indexes of former owners will aid provenance research.

You can search for records of tracts and pamphlets in the Library's online catalogue, Heritage Collections.

Many are available to view online and downloaded in PDF format via the JISC-funded UK Medical Heritage Library.

The bibliographic records covering the tracts and pamphlets are now also available via Copac academic and national library catalogue:

Copac is a freely available library catalogue, giving access to the merged online catalogues of many major UK and Irish academic and National libraries, as well as increasing numbers of specialist libraries.

If you are interested in consulting the tracts, please email library@rcseng.ac.uk.

Other medical and scientific pamphlets collections

Online Journals
Find out how RCS members can access our collection of e-journals and other useful resources.
Literature Searches
The Library offers a free literature search service for members to help with tracking down articles on specific subjects.
Specialty Updates
The Evidence Support Team produces Specialty Updates. Based on RCS England members’ recommendations, Updates contain recent research and evidence in particular surgical fields.
Library Blog
The Library and Surgical Information Services blog explores treasures from our outstanding collections and updates readers on projects and rediscoveries.