Cholera was one of the deadliest diseases to affect Britain in the nineteenth century and this summer marked the 150th anniversary of the fourth and final pandemic in London in 1866.

In the nineteenth century it was believed that the disease was transmitted and spread by a ‘bad air’ or ‘bad smells’ from rotting organic matter. This thinking dominated official medical and government statements and the recently created General Board of Health was amongst those that believed in this theory. But it was not until 1854 that the physician John Snow (1813-1858) made a major contribution to fighting cholera when he was able to demonstrate a link between cholera and the contaminated drinking water through his pioneering studies.

John Snow was born in York on 15 March 1813. He went to Newcastle upon Tyne at the age of 14 to work as an apprentice for the surgeon William Hardcastle. He then went on to study at the Newcastle Infirmary. During the 1831 outbreak of cholera in the North East, he attended to sufferers in the Killingworth Colliery. The excellent observations he made on the disease at this time formed the basis for his later work. 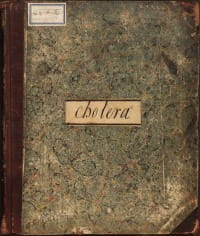 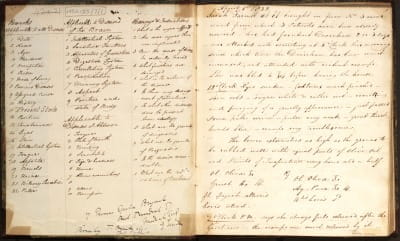 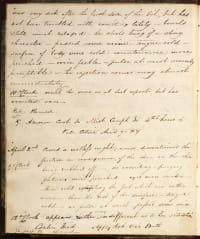 The page above is from the volume titled "Cholera", which contains Thomas Egerton Bryant’s notes of cases of cholera from April 1832. The cases include the name of the patient, symptoms, treatment and result.

Between 1833 and 1836, Snow was an assistant in practice in County Durham and North Yorkshire. In 1836 he moved to London to study at the Hunterian School of Medicine. He began hospital practice in October 1837 at the Westminster Hospital and became a member of the Royal College of Surgeons of England in 1838. The entry below from the 1838 Membership (MRCS) examination book, details the diploma Snow received from College (fifth name from the bottom). He graduated from the University of London in 1844 with a degree in medicine and in 1850 was admitted as a member of the Royal College of Physicians. 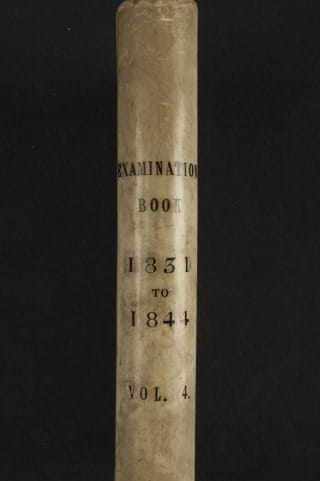 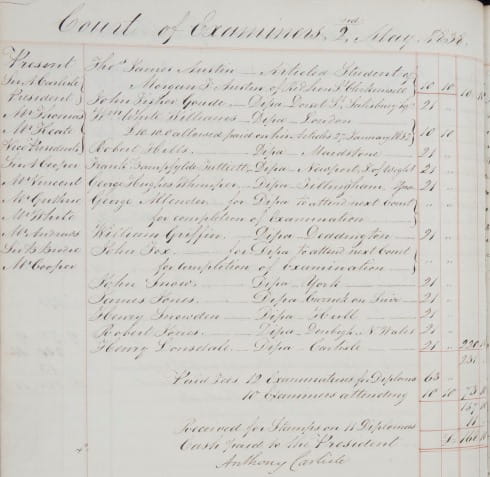 A major outbreak of cholera reached the district of Soho, London, in August 1854. This was the third cholera outbreak in London, having previously occurred in 1832 and 1849. In the mid-19th century, Soho had a serious problem with filth due to the large influx of people and a lack of proper sanitary services: the London sewer system had not reached Soho at this point and drainage was poor throughout London. It was common at the time to have a cesspit under most homes.

By talking to local residents (with the help of the Reverend Henry Whitehead), Snow identified the source of the outbreak as the contaminated public water pump on Broad Street (nowBroadwick Street). He did this by mapping the deaths from cholera, and noted that they were mostly people whose nearest access to water was the Broad Street pump (see map below from On the Mode of Communication of Cholera, 2nd ed.). His studies of the pattern of the disease were convincing enough to persuade the local council to disable the well pump by removing its handle. This action has been credited with contributing significantly to the containment of the disease in the area. It was later discovered that the water for the pump was polluted by sewage contaminated with cholera from a nearby cesspit. 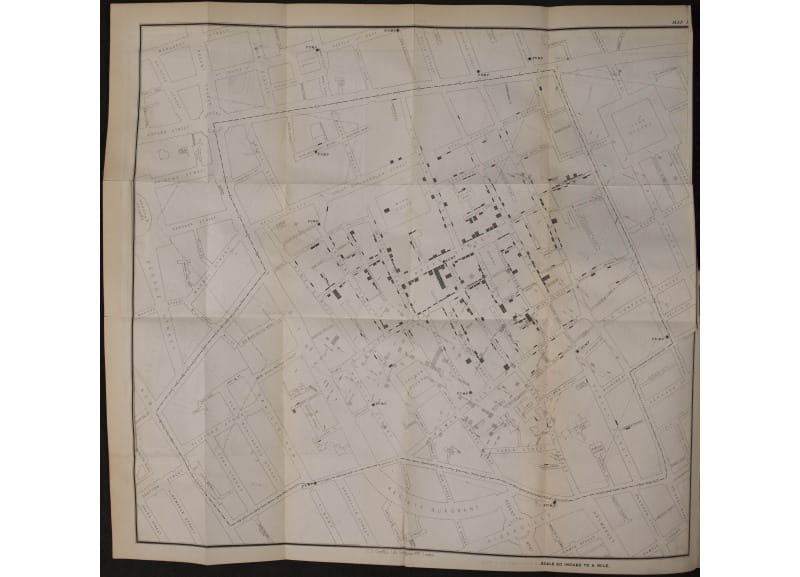 However, Snow’s theory was not new in 1854. He had argued earlier that it was not an airborne disease in his published essay, On the Mode of Communication of Cholera, in 1849. The germ theory was not developed at this point, so Snow was unaware of the mechanism by which the disease was transmitted, but evidence led him to deduce in 1854 that it was not due to breathing in foul air. In 1855 a second edition was published, incorporating the results of his investigation of the Soho epidemic of 1854.

Hand pumps like that on Broad Street were not the only source of Londoners’ water, or Snow’s only object of study during the 1854 cholera outbreak. The Lambeth Water Company and the Southwark and Vauxhall Water Company were both supplying mechanically-pumped water to residents of South London (see map below from Tracts 376). Snow recorded cholera attacks in this area, alongside information about the water supply to the houses affected. He showed that the Southwark and Vauxhall Waterworks Company was taking water from sewage-polluted sections of the Thames and delivering the water to homes, leading to an increased incidence of cholera. 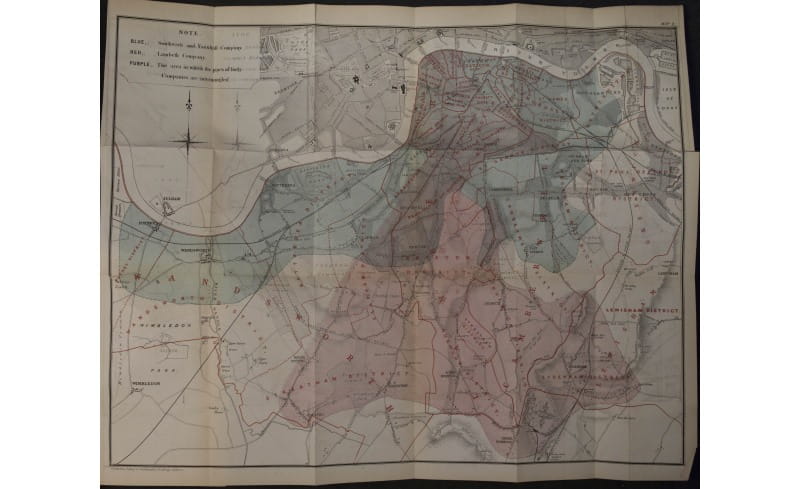 His findings were not immediately accepted but, despite this, they influenced changes in public health and the construction of improved sanitation facilities.

Snow’s study was an important event in the history of epidemiology and public health. Map lovers can enjoy his application of cartography which allowed geographic visualisation of the data. His use of detailed statistical analysis also proved to be an efficient way of showing the correlation between the quality of the water source and cholera cases.

To mark the anniversary of John Simon, a founding father of public health, there is currently an exhibition in the Library using archival material.