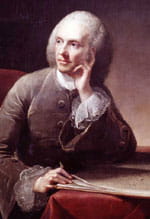 William Hunter was born at Long Calderwood Farm near Glasgow in 1718. He matriculated at Glasgow University in 1731 and later studied medicine at Edinburgh. In 1741 he moved to London.

William Hunter quickly became well-known as a physician, especially as an obstetrician and built up a distinguished clientele, which included members of the Royal Family. He also established himself as a teacher of surgery and anatomy, and assembled a collection of anatomical and pathological specimens, which were used to support his teaching work.

In 1768 he opened a medical school at his house in Great Windmill Street. As his reputation - and wealth - grew, Hunter also collected works of art as well as coins, books, manuscripts and curiosities. After his death in 1783 William Hunter bequeathed his entire collection to Glasgow University, where it formed the basis of the Hunterian Museum which opened in 1807.