In response to the challenge of COVID-19, RCS Council members Sue Hill and Tim Mitchell, who were due to start their cycle from Land's End to John O'Groats on 16 April, have regrettably taken the decision to postpone their cycle ride. They feel that it's sensible not to go ahead at this difficult time.

Sue and Tim and their chosen charity Myeloma UK would like to thank everyone who has donated to their Virgin Money page so far, and they will arrange a new date as soon as they can.

Paediatric surgeons in Nepal numberless than 10 making it impossible for them to treat all 5% of the children of that present with inguinal hernia, even more so when the majority of these specialists are based in the capital city, Kathmandu. Together with Health Partnership Nepal, the provision of this training of doctors in rural Nepal to safely perform the inguinal herniotomy surgery it will provide curative treatment for children who otherwise would not have received it.

Our Christmas Appeal remains just short of its target but the appeal remains open.  The Health Partnership Nepal team flew out to Nepal on 7 February 2020 for two weeks to start the paediatric inguinal hernia project funded by the appeal.  On this occasion they are visiting Charikot and Achham. The generosity of our friends and supporters means we have just £158 left to raise to hit our target. So far we have received  £16,562 in support of this vital initiative. See full appeal details here - Help us improve access to surgical care for children with inguinal hernia in Nepal

Funded by the RCS 2018 Christmas Appeal, the first HDU in Eastern Uganda opened on 15 March 2019. This project has already had a significant impact on mortality rates. Of the patients admitted to the HDU 68% are emergency laparotomies.  Mortality rates of this subset of patients before opening were 17% and have now dropped to 10% since opening.  This is a 41% reduction in mortality rates over the first 6 months.

In 2017, the Christmas appeal raised over £17,000 to fund specialists in newborn surgical care to accompany Miss Naomi Wright and assist in implementing a care bundle for treatment of gastroschisis in sub-Saharan Africa. Gastroschisis is the condition where the baby is born with the bowels protruding through a hole next to the tummy button.

Miss Naomi Wright, paediatric surgeon and project lead is currently in Africa with the support team you funded. Their work is progressing very well as they continue their journey training teams at the seven sites, in this new method of care. The 4 weeks at the Tamale Teaching Hospital was completed in May and during that time, a newborn with gastroschisis was admitted to the hospital. It was treated using the care bundle and survived – the first ever survivor from gastroschisis in the Northern Region of Ghana.

For the full October 2019 update visit the appeal page

Three years ago, surgeons and anaesthetists from Mbale Regional Referral Hospital formed a plan to improve the care of post-operative patients in their corner of eastern Uganda. At the time even the sickest emergency patients were cared for on a 50-bed ward, often staffed by one nurse at a time. Quantifying the problem was the first step; a year long audit revealed that 22.4% of patients were dying after emergency abdominal surgery; more than twice rates in the UK. Most of these patients were young and fit but despite this they were dying in the first few post-operative days.

With no access to monitoring, suction and a limited oxygen supply, the overworked medical and nursing teams were simply unable to identify and treat common surgical complications. At the time a well-equipped high dependency unit was a pipe dream. However, now, thanks to the Royal College of Surgeons Christmas Appeal and your very generous donations, this dream has become a reality.

By Christmas 2018 our original target of £16,387 had not only been met but also exceeded. This allowed us to start construction work in January 2019. ahead of schedule. The partition wall was erected, a water tank and additional sinks installed, and power sockets were fitted and linked to the hospital generator. Shipments of specialist equipment arrived from in country and abroad. Oxygen cylinders, regulators, surgical instruments and monitors were carefully unpacked and fitted.

Recently we admitted a 6-month-old baby to the HDU following major surgery. The baby was very unwell with obstructed bowel and a large segment of dead gut had to be removed during an emergency operation. She was admitted to the ward and was able to receive the close monitoring she required. This meant we were able to protect her airway despite her vomiting; we could also administer oxygen and carefully provide the appropriate quantity of intravenous fluids. Thanks to the excellent care she had received, her condition improved considerably and four days later, against the odds, she recovered and was discharged safely to our surgical ward. Undoubtedly the surgical HDU  played a crucial role in her survival.

The unit has now been open and accepting patients for five months. We want to thank everyone back in the UK who has donated to this project and helped to turn our dream for high quality surgical care in Eastern Uganda into a reality.

'Since our last update all of the specialist equipment has arrived and the final touches made to the building. Our first round of training went smoothly with 35 nurses and intern doctors trained in the basics of high dependency care. With the first few nurses assigned and the shelves stocked with all of the essential drugs and sundries, the unit was soon ready to begin receiving patients. So the only thing left to go was a launch event...

The long awaited opening took place on Friday 15 March and was well attended by local government officials, hospital administration, leading nursing and medical staff and a representative from the ministry of health. The ribbon was cut and everyone flooded in to see the first unit of its kind in the whole of eastern Uganda, needless to say there was plenty of excitement and everyone was extremely thankful to those back in the UK who had donated so generously.

We are starting things slowly to allow time to manage any early difficulties, but the unit will began to take its first patients this week. We're really looking forward to sharing some success stories in the coming months.'

We are delighted to say that thanks to the generous support of our members and donors the final sum raised is £24,209 which far exceeded our original target of £16,387.

Support us every time you shop on Amazon

When you start your shopping at smile.amazon.co.uk Amazon will donate 0.5% of the net purchase price to us. All you need to do is select the Royal College of Surgeons of England as your charity the next time you visit Amazon.

We are delighted to say that thanks to the generous support of our members and donors this appeal has to date raised £23,684 which far exceeded our target of £16,387.

An update from Matthew Doe, our surgeon in Uganda; things are progressing very nicely here in Mbale. The work on converting the space on the surgical ward is well underway - the partition wall is up, plumbing and electrics fitted and the water tank installed. Our carpenter is hard at work building furniture and deliveries of specialist equipment from around East Africa are arriving almost every week. The vital patient monitors are being supplied by Medical Aid International and are currently en route from the UK.

The training element of the project is all set to start next week. We are running two introductory one-day courses for nurses and intern doctors initially, then plan to introduce additional training as they gain experience on the unit. Our hope is that the first team of nursing and medical staff will be trained and ready by the end of February, with the unit to launch in early March.

Adam and I are so thankful to everyone for donating so generously to the Christmas appeal, it surpassed our expectations having raised far more than the original target. This has meant that we have been able to purchase additional equipment such as an oxygen backup system and an ECG machine - the latter being a first for Mbale Regional Referral Hospital. 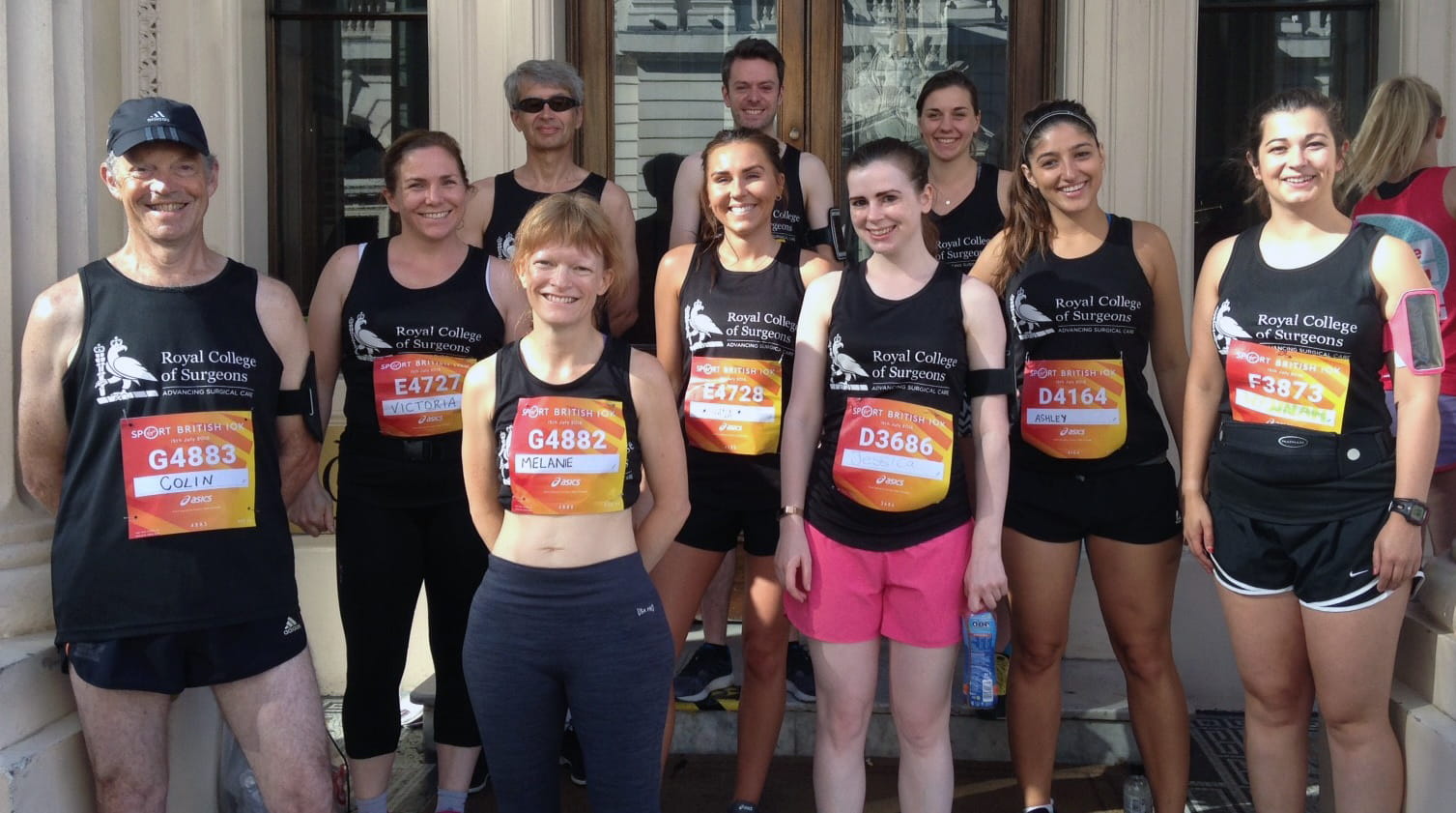 On Sunday 15th July the 12-strong RCS team made up of fellows, staff and friends joined over 11,500 other runners pounding the scorching hot streets of London for the British 10k 2018. They all successfully completed the run - a fantastic achievement and boost to the College’s surgical research fund that has benefited from their generous commitment.

So far the runners have raised a fantastic £2,383 which has been allocated to research fellow Thomas Layton, a plastic surgical trainee at the University of Oxford. Thomas is researching into Dupuytrens Disease which is a fibrotic disorder of the hand affecting 4% of the UK population. This disease leads to impairment of hand function as the fingers curl irreversibly into the palm, it can interfere with handwriting, preparing food etc. While the cause is unknown, it's related to cells called myofibroblasts. Thomas is trying to define the genes which are specific to these cells.

A huge thank you to all the members of the 2018 RCS team and to their supporters for enabling us to complete the funding of this invaluable research.

If you're interested in running for the RCS please email fundraising@rcseng.ac.uk and we’ll contact you with any upcoming events.

We'd love to talk to you about supporting our work...

Legacies are vital to the ongoing work of the College in Research, Education & Heritage. Please give us a call to discuss further or to let us know if you'd like to pledge support to the RCS in you will.

Email fundraising@rcseng.ac.uk to discuss how you can support the vital work of the College in our pursuit of advancing surgical care.

Thanks you for your enquiry. We will reply to you as soon as possible.

Office hours are Monday to Friday, 9am - 5pm.

Conserve our Collections
Many of our items are in need of conservation and this work is both specialised and costly. The Royal College of Surgeons relies on your support to help us conserve our precious collections.
Make Surgery your legacy and leave the RCS a gift in your will
As a charity, the College strives to make significant progress and breakthroughs in the world of surgery and by choosing to leave us a legacy in your will you can have direct impact on the future of surgery and the patients it saves.
Surgical Research Fundraising Films
Watch our short videos to find out how charitable donations are used to fund surgical research for the benefit of patients.