Activity at St George’s to extend the surgical team was described as ‘work in progress for the last five years’. It was initiated as a consequence of the Modernising Medical Careers programme introduced in 2005, which saw the combined ear, nose and throat (ENT), oral maxillofacial (OMF) and plastic surgery department experience a marked reduction in numbers of doctors in training.

The hospital established a 24/7 committee to address a shortage of medical cover in this department – and this led it to consideration of extending the roles for advanced nurse practitioners (ANPs). ANPs with the attributes for specialist practice were identified and an in-house clinical training programme was established. The training was provided by the clinical lead and higher surgical trainees, and covered all aspects of acute ENT management. This included knowledge in specialist interventions such as draining peritonsillar abscesses and use of flexible naso-endoscopes, as well as assessing and managing acute emergencies.

The ANPs did this training alongside doctors at what was ‘senior house officer’ (SHO) level, and sat an examination at the end – their performance in the exam matched that of the doctors in training. This cohort of ANPs were renamed Specialty Nurse Practitioners (SNPs), to reflect the specialty knowledge they had gained in ENT, OMF and plastics. Today five SNPs provide cover at night, alongside higher surgical trainees and ANPs in more generic roles. Doctors in foundation and core training are released from having to provide night cover.

The general surgery department at St George’s Hospital has retained arrangements whereby core trainees provide cover at night, owing to the value it is thought to have for their training. However, much of the ward work at night is done by ANPs, who cross-cover surgical and medical wards. The ANPs call the core trainees for issues that require medical input, while the core trainees cover accident and emergency and are encouraged to focus on areas that benefit their training.

The two distinct models within the division for surgery at St George’s offer a pathway for hospitals considering extending ANP roles. The use of ANPs working alongside core trainees in general and vascular surgery could be a stepping-stone to a model whereby ANPs become specialty trained and effectively replace doctors in the early years of training at night. Such a model will be suitable only where it is felt that providing night cover is not important for doctors in the early years of training. 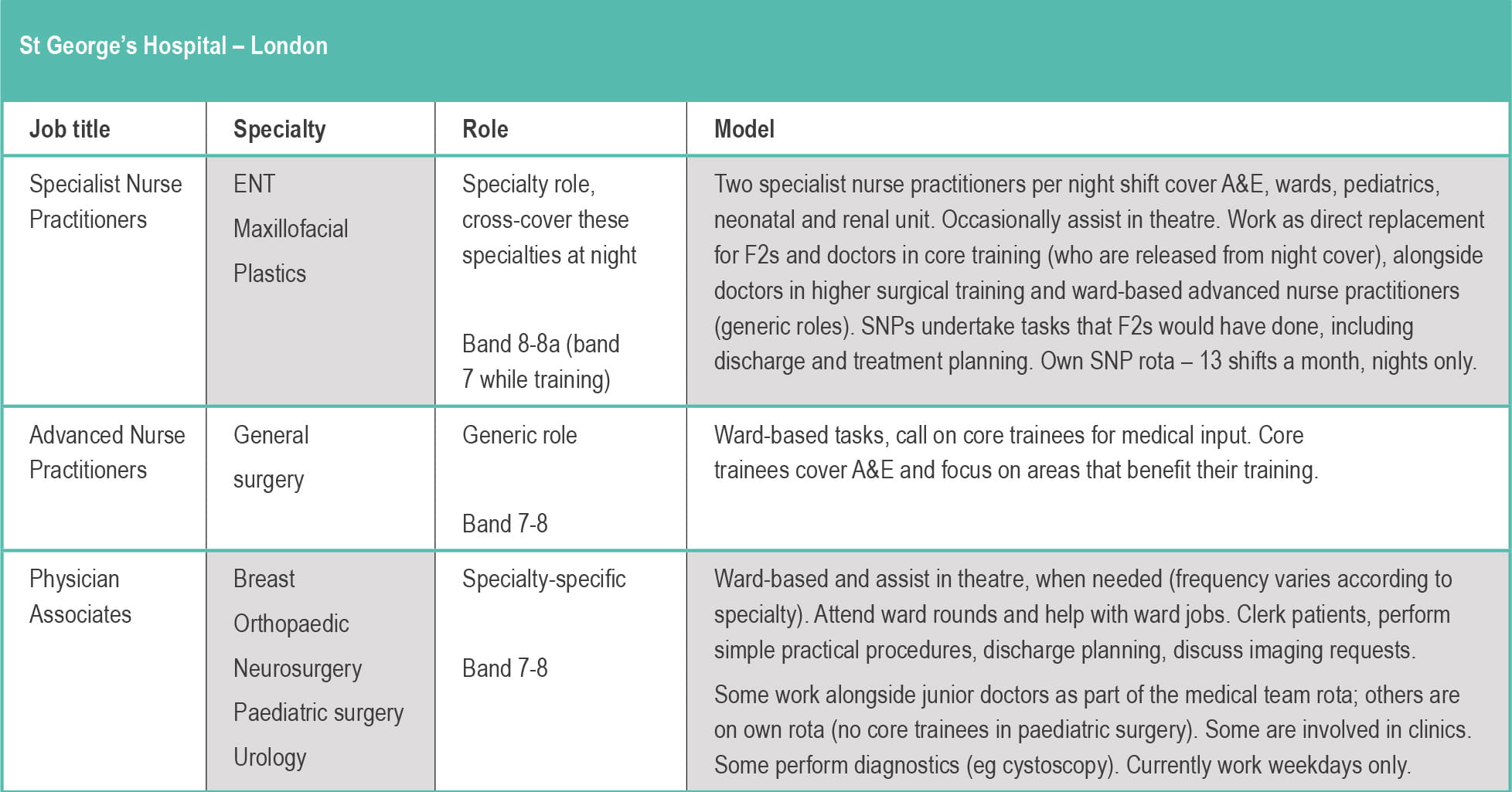