Handling the library’s rare books as we assess them as part of our on-going Collections Review project is a pleasure, and the marginalia which we frequently find in them remind us that they were owned and used by people for centuries before becoming part of a rare book collection. Yet occasionally we come across markings in books which remind us even more strongly of their past role as personal objects: markings by children.

One such find is this flyleaf from Jean Fernel’s 1564 work, Medicina (below left). There are clearly several different hands on it, but the rather shaky attempt towards the top right at writing the author’s surname, which includes getting the “N” the wrong way round and running out of space for the “L”, must be by a child. There is also a rather sweet drawing of a person, and although we can’t decide here on whether it was done by a child or an adult, either way it shows the book not being used for its ‘proper’ purpose. 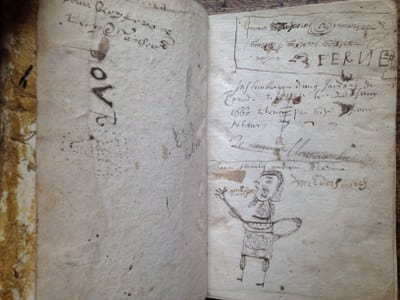 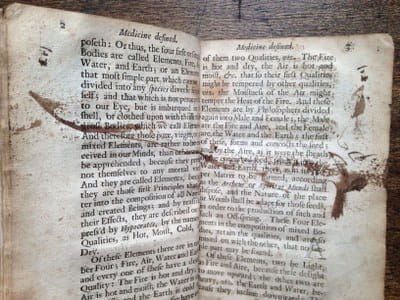 An even younger reader seems to have got their hands on the Library’s copy of The sick-mans rare jewel from 1674 – dozens of pages of this volume are covered in inky scratchings, splodges and scribbles. The picture above right shows one such example. 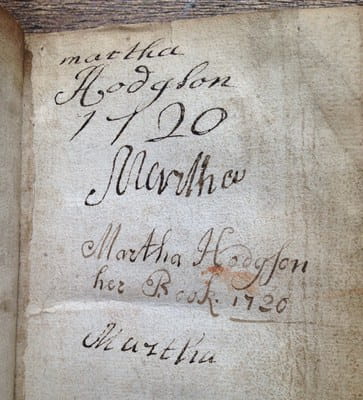 The repeated writing of a name is common in children’s marginalia, according to HJ Jackson’s Marginalia: Readers writing in books (2002), and can be witnessed in some of our items, too: the picture shows the name “Martha Hodgson” written out four times, although it seems in different hands. As Jackson assumes, repeated name writing is usually done by the owner of the item, and although Martha does indeed record it’s “her book”, it seems a strange choice for a young girl in the early eighteenth century: John Moyle’s Chirurgus marinus (1693) – a guide for trainee naval surgeons.

Paper remained an expensive commodity until the mid-nineteenth century, so it could be that Martha and others we’ve found were simply taking a rare opportunity to practice. At the back of Practical chirurgery by Hugh Ryder (1689) one hand has written the alphabet out neatly, whilst another has gone over it very deliberately; so hard, in fact, that it has bled through the page. Along with some more unsteady characters underneath, this must have been some kind of handwriting practice. 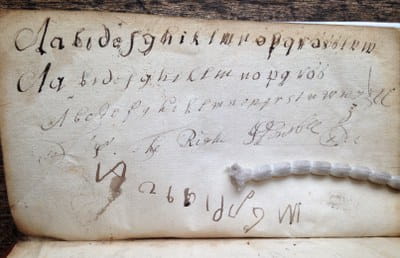 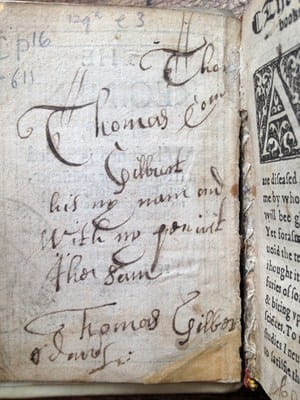 Other owners have added a little more than their names. Like Martha, Thomas Gilburt practices his name in a seventeenth-century hand a few times on the flyleaf of Thomas Faier’s translation of Goeurot’s The regiment of lyfe (1567, left), but also adds the couplet: “Thomas Gilburt is my name, and with my pen is(?) the same”. 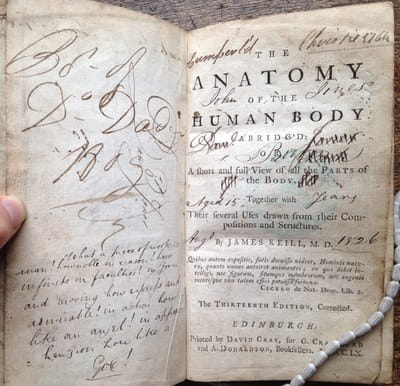 A later example is from John Jones, who writes his name, age – 15 – and the date, 1826, on both the flyleaf and title page of The anatomy of the human body abridg’d by James Keill (1760, right). He also adds a quote from Act II, Scene 2 of Hamlet, beginning, “what a piece of work is man!” Perhaps reading about human anatomy struck a chord with the teenage John, who might also have been inspired by a quote in a different, likely earlier hand at the end of the book (below left), which seems to show that it moved another reader to ponder his impermanence, too: “Oh! man, see thy mortal frame, and think of its dissolution”. The book also records at least three other owners’ signatures, both before and after John’s (below right). 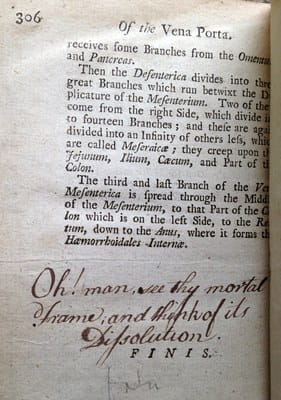 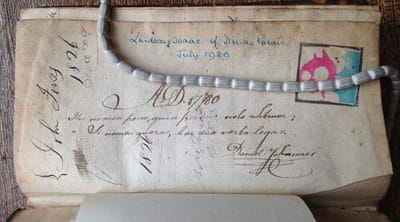 These are just a few select examples of the marks left by the collection’s less apparent previous users, and are a nice reminder that books on anatomy, surgery and medicine had (and continue to have) a far greater reach than just their intended professional audience.

Find updates and images of re-discovered treasures from the project on the Hunterian Museum’s Twitter account: @HunterianLondon #CollectionsReview