Professor Quekett and the Curious Case of the Coal slides

You may be surprised to learn that, like a naughty child at Christmas, the RCS has collected rather a lot of coal.

In the early years of the Hunterian Museum, the curators collected a wide range of natural history specimens, not just those related to anatomy and pathology. There are well over 1000 palaeontology and mineralogy specimens in the collections, including 500 microscope slides of coal from all over the world. These were collected and prepared, in the most part, by John Thomas Quekett, Professor of Histology and Assistant Conservator at the Hunterian Museum.

Some of these slides have an interesting provenance: for example, several samples were sent to the museum from central Africa by the famous explorer and missionary Dr David Livingstone. Another series of slides contain samples from South Georgia collected by Robert McCormick on James Clark Ross’ Antarctic expedition between 1839 and 1842. This expedition discovered, among other things, the Ross Sea, the Ross Ice Shelf, the Transantarctic Mountains and the Ross seal.

This was the expedition the made the name of the famous botanist Joseph Dalton Hooker who was a close friend of Charles Darwin. Hooker donated some samples of wood from the expedition which also found their way into Professor Quekett’s slide collection. Hooker’s own similar collection of microscope slides of coal and fossil wood is held by the British Geological Survey and caused some excitement when it was re-discovered in 2012.

Quekett’s collection contains samples from collieries closer to home too. He collected samples from pits in Wales, Scotland, the North East, Yorkshire, Derbyshire and Cornwall, indeed anywhere coal was mined in the UK. 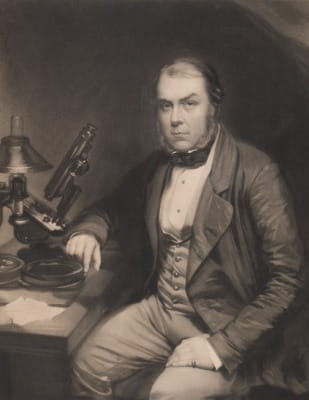 It appears Quekett may have been inspired to build this collection by the most exciting Victorian coal-based court case you have never heard of. In 1853, Quekett became involved in the Torbane Hill mineral case as an expert witness trying to prove that a mineral mined at Torbane Hill in West Lothian was not coal. Quekett was on the losing side of the case, but as a result produced and collected many, many slides to support his argument.

Whatever it was that prompted Professor Quekett to concentrate on all things coal, the collection he left behind is potentially very interesting to anyone studying coal and plant fossils, the history of science and exploration or the history of coal mining. The collection may well contain the only samples from mines that have been mined out and closed for over 100 years.

With thanks to Harry Riley for inspiring this blog and the Quekett Microscopical Club for their generous funding of the Quekett Project.