Protecting the Library during redevelopment

The redevelopment work to transform the College’s Lincoln’s Inn Fields home is well underway. Looking out of my office, I can now see all the way down into the basement and then look across the Barry building, standing over the site. 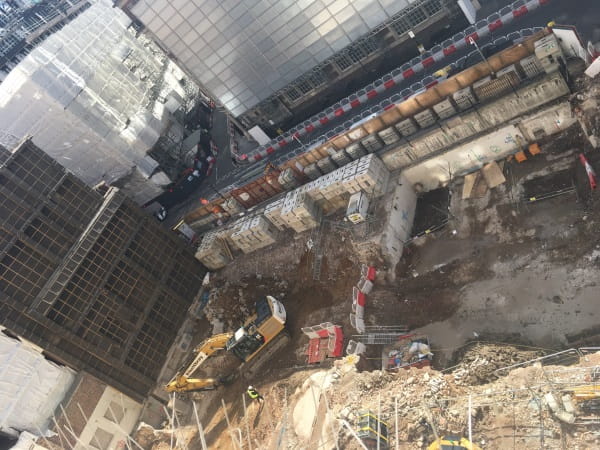 When the building was severely damaged in 1941, only the front part of the College remained intact (the portico, entrance hall and the Library). It was thanks to the strength of the two sets of cast iron fire doors into the Library that the front of Sir Charles Barry’s building survived. This part of the building is Grade II* heritage listed and is being fully protected 24 hours a day during the redevelopment. 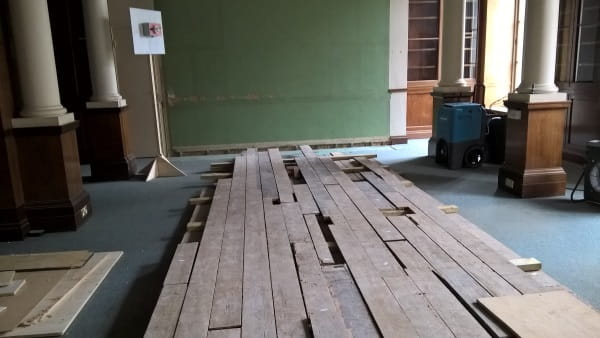 The Library rooms occupy the 1st and 2nd floors of the Barry building and great care is being taken to protect them. As the surrounding buildings have been demolished, the Library is now in ‘island’ mode for the first time in decades, effectively a free-standing building at present. Last winter, heaters, dehumidifiers and air-movement fans were used to control the temperature and to protect the woodwork and plaster from any damp or condensation. The rooms are constantly monitored using data loggers to record and monitor temperature and relative humidity, ensuring we meet the requirements of the Planning (Listed Buildings and Conservation) Act 1990 and our Library Conservation Management Policies. 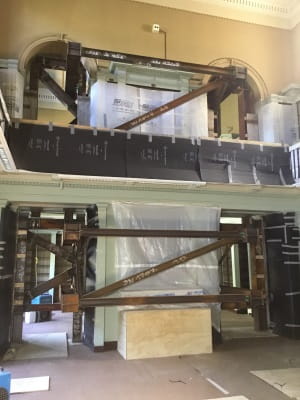 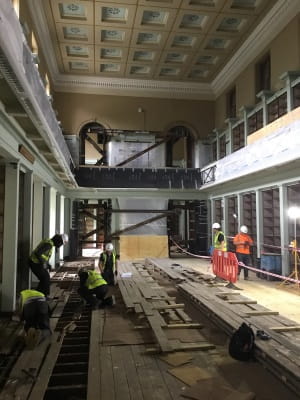 Steel braces have been placed within the Library spaces to prove maximum support to the structure of the Reading Room, while the redevelopment work continues. We used the extra bracing to ensure that the construction activity doesn’t threaten structural stability as we are excavating the double basement level. While the (now) external wall is structurally sound and weather-tight, there are several doorways in it where the Barry Building was connected to the post-war building.

All the plaster and woodwork within the Library will be restored during the redevelopment project. The floor boards are currently being lifted to allow new services routes to be created for power and heating, etc. Before they were lifted, each plank had to be marked, numbered and coded, so that the floor can be perfectly reassembled, reproducing the original design when it’s re-laid. The same care will be taken when work is carried out to restore the bookcases and shelves as they were built to fit the space exactly. 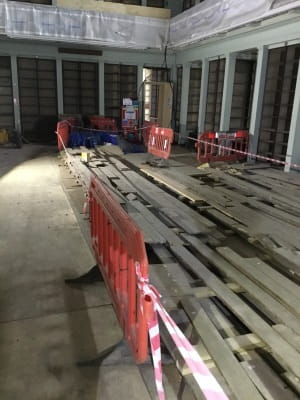 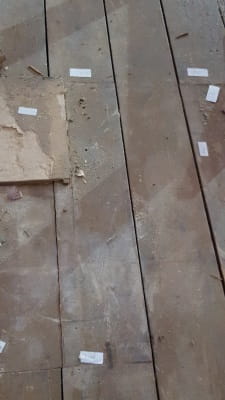 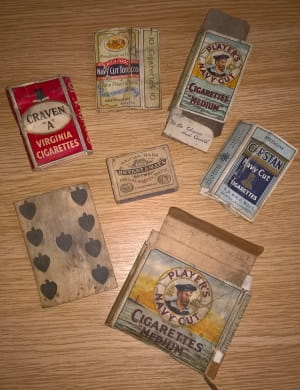 When the floor boards were lifted, a surprising discovery was made at one end of the Library. Our contractors found these old cigarette packets, match box and a playing card under the floorboards. Were they lost by workmen replacing the wiring in the early 1960s, Members or even the Librarian playing cards and smoking to pass the time? We’ll never know, but they add another layer of social history to the Library’s past.

The Library shelving and floor boards are all softwood and are generally in good condition. Historic sources tell us that Sir John Soane took a keen interest in the sourcing and specification of timbers for his building works, so it isn’t unreasonable to assume that Barry, as his protégé, had similar views. In the absence of sufficient stock of English oak (reserved mostly for the navy), imported Baltic softwood was used for the population and construction boom following the industrial revolution, with Soane even stating a preference for particular forests. The timber was taken from trees which were slow-grown, which usually results in a fine, close-grained texture fairly clear of knots, with good durability and stability. Such foresight in specifying best quality, well-seasoned timber has proven to be a wise choice.

Barry was interested in new technology, advocating the use of Kyan’s patent timber treatment, which was agreed by the building committee in 1834. Kyan’s treatment, a ‘corrosive sublimate’ (bichloride of mercury) had been satisfactorily demonstrated to prevent rot and insect infestation. Of course we can’t know the long-term effectiveness of such treatment, or identify the exact application at RCS or within Library spaces. However, it was used extensively in this period and seems to have been the preferred timber treatment for a few decades, so may have been applied throughout. As we’ve said, the timber is in good condition.

Working with a heritage building is interesting but comes with challenges. It is interesting to see how the original building has fared over the years and to be one of a chain of people maintaining the building for the future.