The chicken or the egg? Art, lectures and a basilisk

As part of the RCS Collections Review project, the Museum’s visual works are currently being assessed. This category includes sculptures, pencil drawings, prints, oil paintings, pastels and watercolours. My current favourite is a small subsample (45 items) of egg drawings. Most of these drawings are contemporary with John Hunter’s “Products of Generation” series, in which he demonstrated the development of the embryos of various animals. 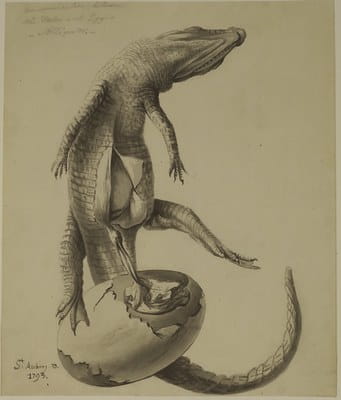 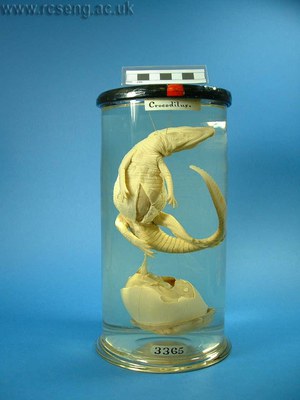 In addition to William Bell’s drawings (1782) illustrating the early stages of development of a fertilised hen’s egg, the collection also includes Joseph Saint-Aubin’s drawing of the preparation of a young crocodile emerging from an egg in 1793. The latter image was also published in the Descriptive Catalogue of the Physiological Series of the Hunterian Museum (volume 2).

John Hunter also mentioned his observations on the growth of the chick in the process of incubations in his lectures. It is likely that Jan van Rymsdyk’s drawing (1758-9) demonstrating a series of developing chicken and geese eggs was commissioned by Hunter for these lectures. The use of coloured pastels and parchment indicate that these were presentation drawings and not intended for publication. During the conservation of this work, a fragment of newspaper dated 1759 was found on the original stretcher, providing additional evidence that these drawings were used in Hunter’s lectures. 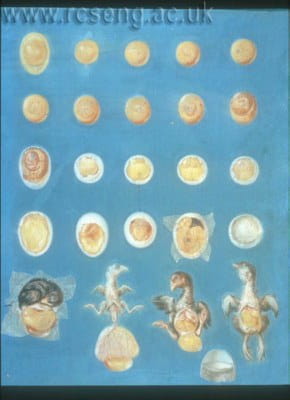 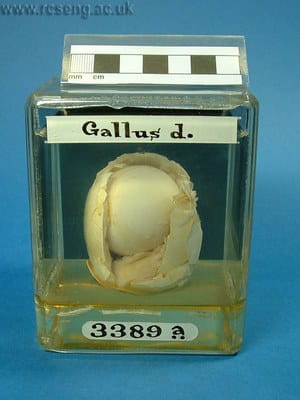 The beautiful drawings inspired me to go on an “egg-hunt” amongst the museum specimens, which led to the discovery of a “pseudo-egg” or centeninum. Small eggs such as this were described by William Harvey in his De generatione animalium of 1651, who mentioned that these were believed by “country folks” to have been laid by cockerels, and could produce a basilisk (a legendary reptile creature) if incubated.