This hand-coloured engraving is by Thomas Rowlandson, one of Georgian England’s leading satirists. Published in 1787, it shows a fashionable dentist removing teeth from poor children and implanting them into the mouths of wealthy patients. The procedure was described by John Hunter in his 1771 publication The Natural History of Human Teeth. Here Hunter explains how a freshly extracted tooth could be pushed into an empty socket and then fixed to the surrounding teeth with silk or seaweed. 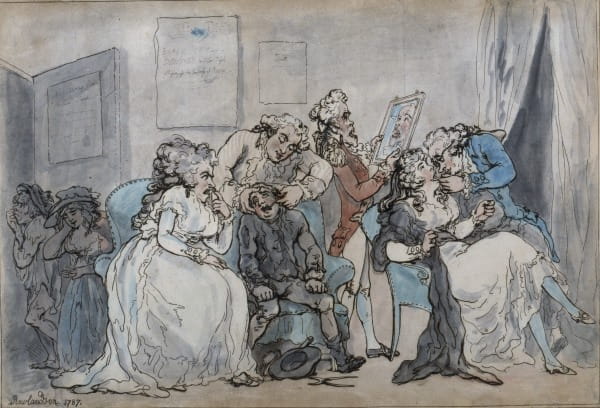 Tooth transplantation was a lucrative but controversial practice in the 18th century; Rowlandson’s cartoon highlights the questionable ethics and exploitation of the poor. While unscrupulous dentists charged large sums for the treatment, vulnerable donors, like the young chimney sweep depicted in the cartoon, received little reward. There were also clinical limitations: long-term success was rare as the transplanted teeth loosened over time. More serious still was the danger of cross infection from donor to recipient. Eventually the ineffectiveness, the risks to health, and a growing public distaste for the practice, combined with the introduction of improved, porcelain dentures, led to the procedure being pretty much abandoned by the 19th century.