On display until Autumn 2015

Anatomical models of the human body have been used to educate and entertain since the late seventeenth century. Artists created écorchés, anatomical studies of flayed men, to study the action of muscles. Midwives made leather and wood “obstetric phantoms” to provide hands-on training for assisted births.

Clean and sanitised, wax models were valuable tools for social improvement and public education from the eighteenth century. They were also used in medical training to supplement dissection; corpses could be difficult to obtain and would quickly decay.

The market in models expanded rapidly during the nineteenth century. Using papier-mâché instead of wax, the French doctor Auzoux turned anatomical models from individually sculpted works of art into mass produced teaching aids.

The company Somso Modelle was founded in Sonneberg, Germany in 1876. As well as simple educational designs, Somso Modelle worked with experts to build highly specialised models. This one was probably intended for use in universities. It comes apart to illustrate the internal structure of the body.

In the College today surgical trainees still use models and high-tech simulators to improve their anatomical knowledge, surgical dexterity and clinical experience. 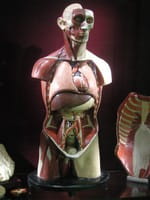 (Above, left:) Anatomical teaching model in painted plaster of Paris and papier-mâché, made by Somso Modelle and supplied by Adam,Rouilly, circa 1930 RCSHM/Z 171

(Above, centre:) Illustration from a Somso Modelle catalogue, 1923 Courtesy of SOMSO Modelle and Adam, Rouilly

(Above, right:) Illustration from a Somso Modelle catalogue, 1928 Courtesy of SOMSO Modelle and Adam, Rouilly