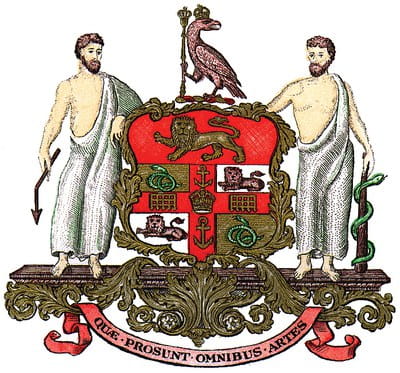 In 1745 the Company of Barber-Surgeons split to form the Worshipful Company of Barbers and the Company (later Royal College) of Surgeons. This split not only created two bodies, but also meant that the surgeons no longer had a coat of arms. Rather than seeking a patent from the Kings of Arms, the Company paid a man named Mr. Brookshead three guineas to design one.

The original coat of arms

The original coat of arms featured the sons of Aesculapius (Greek god of healing); two brothers who were surgeons at the siege of Troy. On the left side is Machaon who is depicted holding the broken dart reportedly extracted from the side of King Menelaus and which symbolises the healing of wounds. On the right side is Podalirus, a physician, who was originally featured holding a surgeon’s knife.

The portcullises may also represent the arms of the City of Westminster. The anchors may refer to the College’s role examining surgeons for the Navy and the anchor is also the badge of the Parish of St. Clement Danes, where the College is situated. The eagle in the crest (which is now the College logo) symbolises fortitude.

In 1800, the College was granted a Royal Charter and although the design was kept roughly the same, Podalirus was depicted bearing his father’s rod entwined by a serpent, also an emblem of healing.

The motto – QUAE PROSUNT OMNIBUS ARTES – means: “the arts which are of service to all”.