A book written by a walking stick? 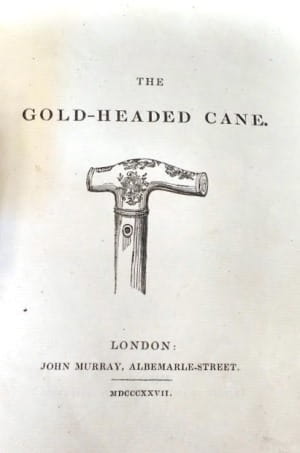 Our nineteenth century collection holds several editions of a small book of recollections entitled The Gold–Headed Cane (1915). The book records the medical biography of six eminent physicians in a very idiosyncratic way, in that it is written from the point of view of a walking cane. Canes were often carried by doctors in the 18th century and became a symbol of the profession. Tradition dictated that notable eighteenth century physicians passed a very particular handsome gold–headed cane as a sign of recognition from the older generation to the younger one. Owning the cane was a great honour and a sign of eminence.

William Macmichael (1783–1839), the Librarian of the Royal College of Physicians and a physician and medical biographer, wrote the book about the six owners, “narrated” by the cane itself. Each section gives an account of the life of the cane’s custodian. The six physicians who owned the cane, in order, were: John Radcliffe, Richard Mead, Anthony Askew, William Pitcairn, David Pitcairn and Matthew Baillie. Thus the period covered in the book is roughly 1682–1823. It provides a fascinating insight into medical care in a different time. 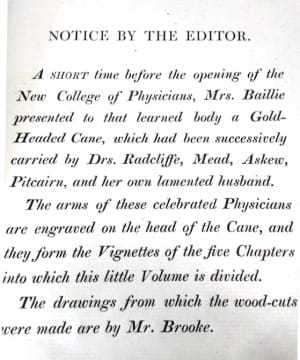 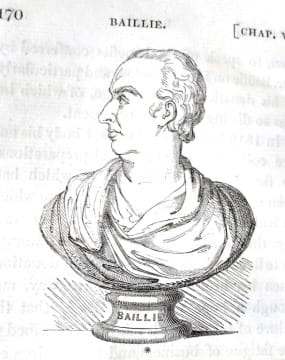 Matthew Baillie (1761–1823) the owner most closely associated with the Royal College of Surgeons of England, is the sixth and final physician profiled in the book. Baillie was the nephew of William and John Hunter and was, arguably, the owner whose academic achievements were the greatest. He contrived to use clinical observations alongside pathological research to inform his medical opinion and published on the enhanced understanding that could be achieved with these comparative studies. Baillie trained under John Hunter and inherited a large portion of William Hunter’s estate, including £5000 and his residence and famous anatomy school on Great Windmill Street, where Baillie taught from 1783 until 1803. 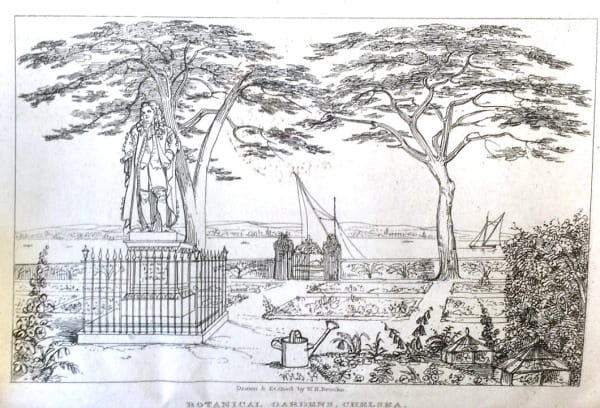 The frontispiece of the book is an engraving of the Chelsea Physick Garden, as John Radcliffe was a lifelong friend of Hans Sloane, who secured the garden for the Society of Apothecaries in 1712.

The titular cane is still held at the Royal College of Physicians, having been presented to the College some months after Baillie’s death in 1824.

The copies of the book that the Library hold include one volume that appears to have come to the College by a donation from Humphry Davy Rolleston (1862–1944) via Dr John Mitchell Bruce (1846–1929). Bruce was a Harley Street resident, who wrote to Rolleston when sending him the book in a letter now kept with it: “I enjoy the thought that it will be with you whom it best befits”. Rolleston was an avid bibliophile and was made a Fellow of the College in 1894, his entry in Plarr's Lives of the Fellows records that he visited the RCS Library every day and often donated books. 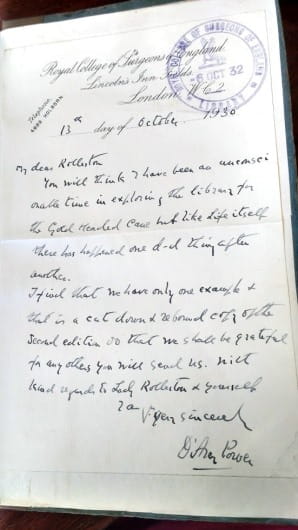 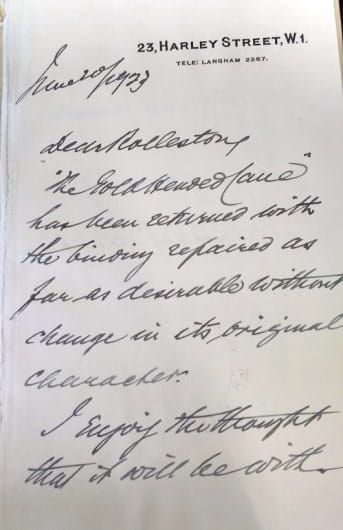 A letter from D’Arcy Power (Honorary Librarian), also included with the book, might raise a smile with other harried, stressed–out librarians — in it he writes “You will think I have been an unconscionable time in exploring the Library for the Gold–headed Cane but like life itself there has happened one d___d thing after another”. Power did accept the book from Rolleston and it now resides with the others of various dates and imprints, proving what a popular, if eccentric, take on medical biography it was.