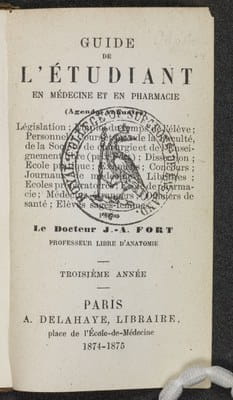 This fascinating little book is the Guide de l'Étudiant en Médecine et en Pharmacie 1874-1875 by Joseph Auguste Aristide Fort, a guide for medical students of the Paris medical school and full of details on courses and their content, term time calendar, lecturers and examinations, similar to the way medical schools today provide this information on their websites. The book measures only 7 by 10.5 cm, could easily fit into a student’s coat pocket and gives the following advice:

To reach the degree of Doctor of Medicine, the student must assimilate gradually and methodically many sciences, without the knowledge of which he suffers failure in examinations. Chemistry, physics, zoology, botany, anatomy, histology, physiology, internal pathology, external pathology, surgical operations, hygiene, forensic medicine, therapeutics, pharmacology, births, internal clinic, and outpatient clinic: all this you need to know to tackle the exams and conquer your medical degree.

Students had to complete their studies in six years, but there was no given order of which subjects to study at which time, concurrently or one after the other, and according to the author, many lost their way in the “maze” of the first or second year. He therefore considered his little book “indispensable” to the medical student of the time.

Its day-by-day calendar gives details of when to register for courses and exams, and the month of August has this interesting comment regarding the summer holidays:

During the holidays, it is deserted. No more courses at the faculty, no more practical sessions, no clinic. Surgeons and physicians take to the baths and most services are done by surgeons and doctors of the central office, often very capably.

Sample examination questions from 1873 include:

Where in the body is the warmest blood?

The images of lecturers show Monsieur Charcot - Anatomy & Physiology, Monsieur Robin – Histology and Monsieur Dolbeau - External Pathology. All three of those are represented in the College library. Jean-Martin Charcot (1825-1893) taught anatomy but his interest was in neurology and he was the first to name and describe multiple sclerosis. His book Leçons sur les maladies du système nerveux faites a la Saltpétriere (1872-87 in 3 vols) contains a plate showing the effects of sclerosis on the human brain. 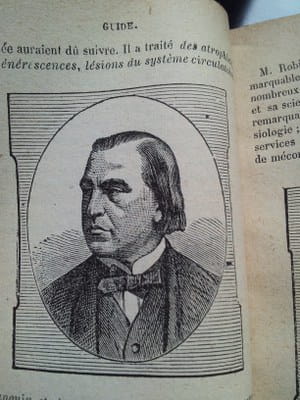 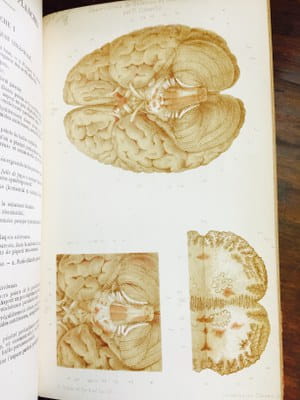 Charles-Philippe Robin (1821-1885) was a French anatomist and histologist, and a member of the Académie des Sciences who, with other scientists, established the Société de Biologie. The student guide describes him as “the least sympathetic examiner”, however he was not to be dreaded as he valued a candidate’s intelligence as much as his knowledge and appreciated well thought through answers. His Mémoire sur l'épithélioma du rein et sur les minces filaments granuleux des tubes urinipares expulsés avec les urines (1855) is part of our Tracts and Pamphlets collection and clearly shows his signature on the cover page. 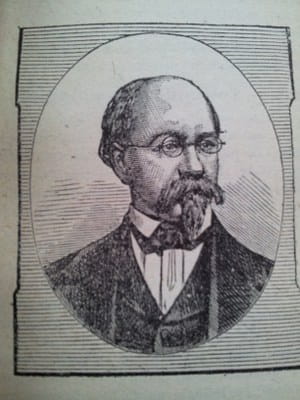 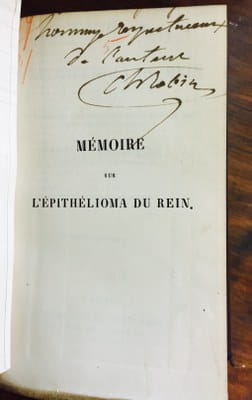 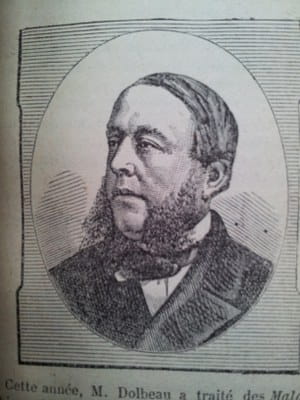 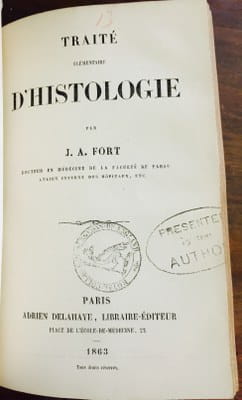 The author of this student guide, Joseph Auguste Aristide Fort, was the son of a surgeon to the Napoleonic armies. Born in 1835 in Mirande, he was encouraged by his father to study pharmacology. Starting as a chocolatier in a pharmacy in Lourdes, he subsequently found employment in Paris, receiving 25 francs a month. For a few months he succeeded in serving as a pharmacist in the Hôtel-Dieu while simultaneously working in medicine at the Sâlpetrière hospital. Faced with having to choose, he chose medicine and at the age of 28, after passing his doctoral exams, he published two remarkable books – Anatomie descriptive (the 2nd edition is held in our collections) and Traité élémentaire d’histologie (1863 – and presented to us by the author). He became Professor of Anatomy in Paris and was well-known for his flamboyant lectures. He later moved to Uruguay, Brazil and Chile where he became a celebrated surgeon, but he also attracted professional jealousy and eventually moved back to France where he died in obscurity.