Anatomie très utile: ‘The anatyme of the inwarde partis of man and woman’

Anatomie très utile c.1559 is an anatomical ‘fugitive’ sheet designed to display internal organs and structures. Prints like this were often damaged or lost, which led to the description ‘fugitive’ sheet.

This anatomy print with multiple liftable flaps reveals the interior organs of a naked man and woman seated beside each other on a bench in front of a brick wall flanked by columns. Compared to some contemporary ‘paper manikins’ of anatomy this is a simpler and cruder work that conveys basic topographical anatomy in layers. In the centre there is a window through which a landscape is seen. The illustration is a woodcut with hand-colouring. The titles run along the top in French and Latin printed in letterpress and on a sign held by the woman there is the motto “Nosce te ipsum. Knowe thyself”, the image also contains numerous letters on each anatomy that correspond with the key. 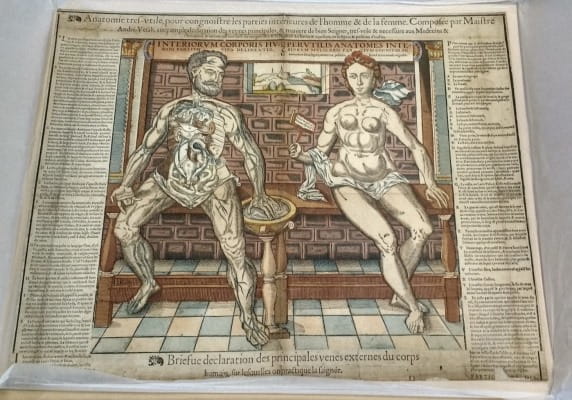 French printer and craftsman Gyles Godet worked in London from the end of the 1540s until his death c.1571, but had his blocks made in Paris, on the Rue Montorgueil, this print was listed as part of an inventory of 27 works Godet sold in London, entered in the Stationers’ company register for the years 1562-3. Over half of Godet’s wood cut stock was religious and this was therefore the focus of his trade in ‘stories’; as printed pictures were then known. Arguably single pictures were cheap enough for anyone to afford, whereas the, often religious, sets of 6 were accessible only to a more wealthy buyer. Godet seemed to have been careful in choosing inoffensive religious material for the English market, making this anatomical scene an interesting deviation from that conservative selection. 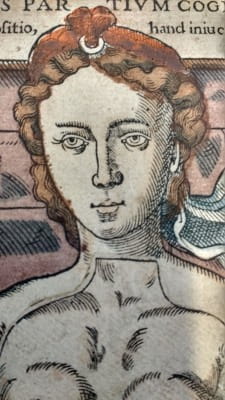 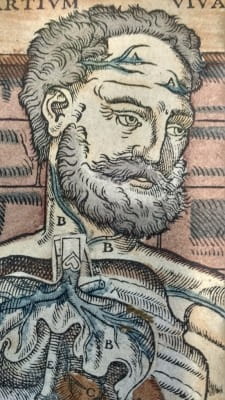 Some historians argue that the wording used on the sheet chimes with Reformation values stressing “verification by personal experience…[ and] a faith unmediated by hierarchical authority. Under the aegis of Protestantism, therefore, anatomical knowledge became an important adjunct to spiritual salvation.” The language used (“inward partes of woman, [is] very necessarie to be knowen to Phisitians and Surgians and all other that desyre to knowe them selves”) ties in with the image of the semi-nude female who Laoutaris argues is “complicitous in her own anatomisation” precisely because of the sign she holds – “knowe thyself”. Protestants and Lutherans in particular, argued that the “sight of the wonderful skill in the entire construction of man” strengthened their faith (Jakob Milich for Philip Melanchthon, Wittenberg University 1550). 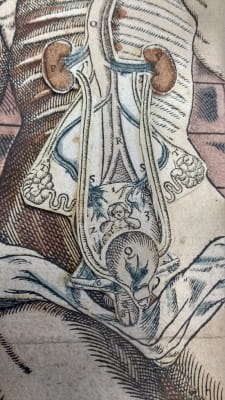 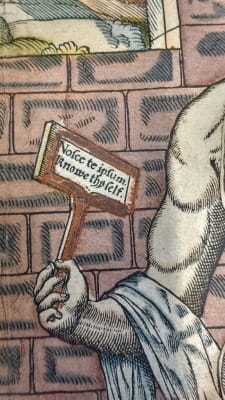 The picture’s origin in France explains the French title and key, and the English plaque held by the woman. The woodcut was used in the 3rd English edition of Thomas Geminus's Anatomy, published in London in 1559, hence the dating of the block, but there is no evidence to categorically say when the block was first used.