Anatomy: a hymn in praise of the wisdom of God 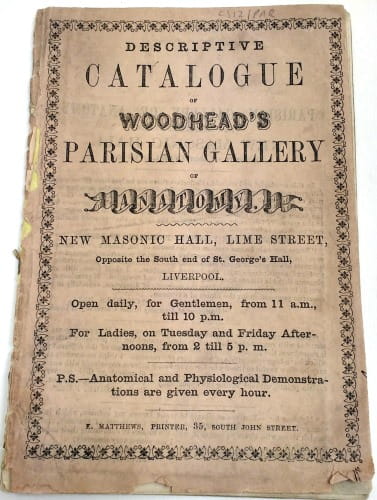 Parisian Gallery of Anatomy: descriptive catalogue of the anatomical and pathological models in the above-named museum: this rare and scientific collection consists of upwards of 400 models and diagrams brought from Paris, Munich and Florence. J. T. Woodhead. Liverpool: E. Matthews, [1854?].

“The study of Anatomy is the use of a hymn in praise of the wisdom of God.” So appears an anonymous quote on the title page of the prospectus of the Parisian Gallery of Anatomy, an anatomical museum that based itself in Sheffield, Liverpool and Manchester from the 1850s to the 1870s. The museum, like others of its ilk, was intended for a non-medical audience, and therefore concerned not only with depicting dissection and scientific accuracy in its exhibits but also possibly with sensationalising its themes for entertainment value. Thus, it was reflecting the sensibility of the day, with both suggestive titillation and alarmist moral judgments featuring in this descriptive booklet.

The booklet might have been purchased as a guide or handed out to encourage visitors to step forth and visit. The tone is of a promotional feature to influence the audience view of the items contained therein. 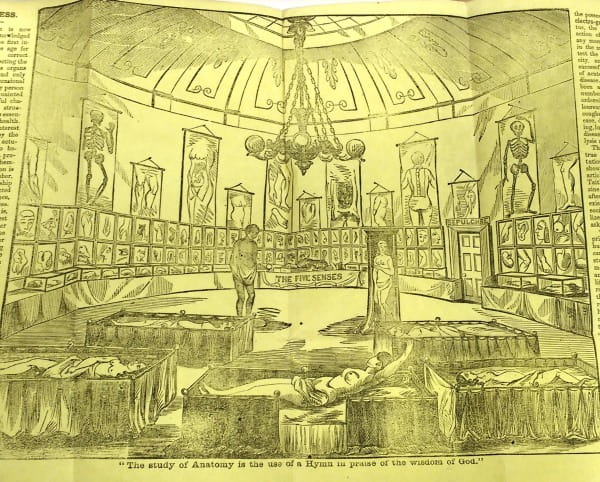 Wax models, like the five nude recumbent ladies depicted in the fold-out illustration, originated in Venice, Florence and Paris, according to the booklet. Wax models would have been made by skilled craftsmen and often sported real hair and eyelashes. Other models were fabricated with a new papier mache technique that stood up better to handling.

The “Parisian Venus” mentioned on page 3 (appropriately enough) is modelled on the Venus de Medici, an interesting choice given that the original statue had been sent from Rome to Florence in 1677 by Pope Innocent XI because it had a reputation for “stimulating lewd behaviour”. In the description of another female model called the “Anatomical Greek Slave” the wording touches on the function of the organs but also refers to how “the beautiful life-like skin is also beautifully pourtrayed”. Modelling the figures after famous artistic pieces helped provide a veneer of respectability to the exhibits. 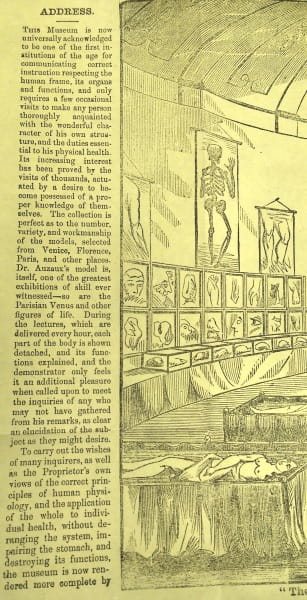 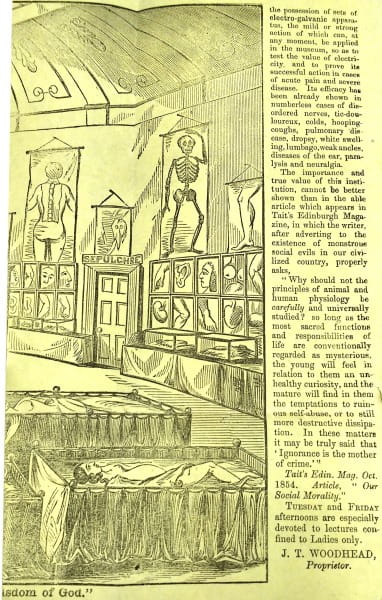 Both sexes were encouraged to visit the main displays (though Ladies were only welcome on two afternoons of the week, whilst men could visit daily between 11am and 10pm). However the “Private Room” held the following warning “Ladies are requested not to enter this sepulchre…” as it contained models of male and female genitalia “some in a diseased state brought on by their own wicked folly”. These models were, the Sheffield Free Press declared, “less pleasing…[but] well calculated to promote virtue, by showing the miserable effects of vice”.

Another stated purpose of the museum was to enable the observer to learn enough about their body, by the description and explanation in the booklet and by discussion led by instructors, to heal themselves of minor ailments. This led to criticism from the medical community. The profession wanted to keep control over the sort of anatomy displayed, whom it was available to and to discourage the supply of unregulated ‘medicine’, as anatomical museums also moved into supplying quack remedies for conditions like gonorrhoea and syphilis, in this period. 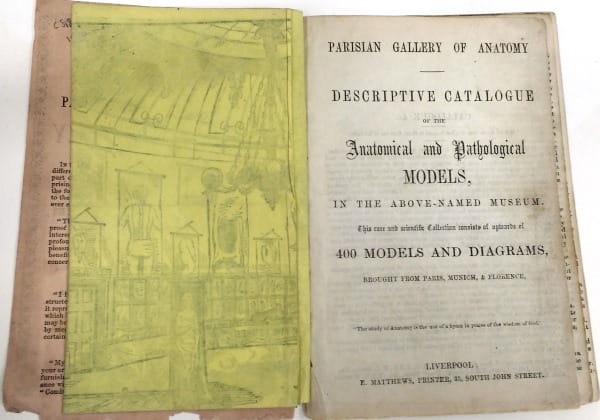 As one medical historian notes “Under English obscenity laws, professionals, by virtue of their education, social background and character, were deemed impervious to influences that could corrupt the weaker-minded public” (Bates, A W. 2008. ‘“Indecent And Demoralising Representations”: Public Anatomy Museums In Mid-Victorian England’. Medical History 52 (01): 1–22.). In the end the opposition proved too much and after repeated legal challenges all of the various popular anatomical museums had closed by the end of the 1870s.