Benjamin Bynoe - surgeon on board the Beagle

Benjamin Bynoe served as ship’s surgeon on board HMS Beagle during Charles Darwin’s epic five-year voyage, helped survey areas of South America and Australia, and collected important scientific specimens, but his name has been largely forgotten. When Victor Plarr wrote Bynoe’s obituary in the original two-volume Lives, he summed up his eventful life in just two lines: “Entered the Royal Navy and retired with the rank of Staff Surgeon. He died at Old Kent Road, SE, on Nov 15th, 1865.” 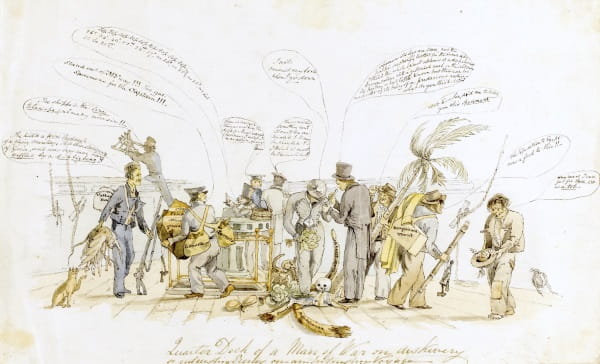 Augustus EARLE (1793 - 1838), Quarter Deck of a Man of War on Diskivery (sic) or interesting Scenes on an Interesting Voyage, 1832. Benjamin Bynoe is believed to be the figure in light grey holding a plant in the centre of the image, next to Charles Darwin (in the tall hat). Image from Wikimedia Commons, public domain.

Bynoe was born in Barbados in 1803, but there are no records of his medical education. He became a member of the Royal College of Surgeons in May 1825 and two months later joined the Royal Navy as an assistant surgeon.

Bynoe was assigned to Beagle during her maiden voyage, surveying the coast of South America south of the Rio Plata, but it was during the second voyage that he met Charles Darwin, then just 22 and a guest of the captain Robert FitzRoy. When the ship sailed on 27 December 1831, Bynoe was the assistant surgeon, but became acting surgeon when Robert McComick invalided himself home.

Bynoe soon became indispensable to Darwin, as the young naturalist recorded in his journals. When Darwin became ill in Chile in September 1834, Bynoe stayed with him on land for a month and nursed him back to health. Darwin noted: “I must likewise take the opportunity of returning my sincere thanks to Mr Bynoe for his very kind attention to me while I was ill at Valparaiso”. In the Galapagos Islands, where Darwin made the discoveries which led to his theory of natural selection, he and Bynoe were ashore for nine days, studying the rocks, lizards, tortoises and vegetation. Darwin later used some of Bynoe’s notes of their Galapagos finds when writing On the origin of species.

In 1837 Bynoe was surgeon on board Beagle when the ship left Plymouth for her third voyage, tasked with surveying Australian waters. Bynoe collected a number of important specimens, later donated to the British Museum and the W J Hooker Herbarium at Kew. And when the then captain, John Stokes, later wrote a narrative of the voyage, Discoveries in Australia… (London, T and W Boone, 1846), he included a number of papers by Bynoe, including an account of the crew’s encounter with some Aborigines at Roebuck Bay, a discussion of the climate and a description of marsupials. 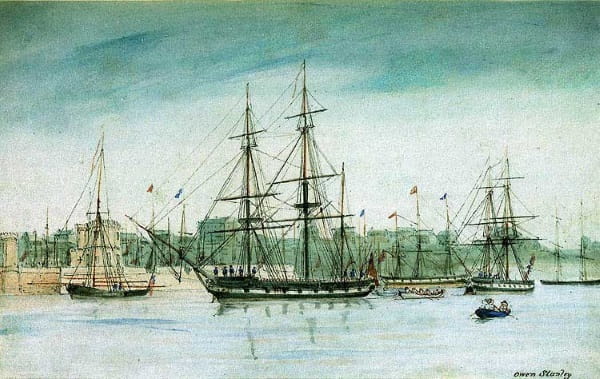 Bynoe also took part in the British government’s (limited) attempts to provide relief during the Irish Famine. In February 1847, he was directed by the Royal Navy to go to Cork “to aid in carrying our measures for the relief of the Distressed Irish” and two months later went to Belmullet, to help with outbreaks of typhus and dysentery. But the promised medical supplies were slow to arrive and Bynoe himself became ill. He stayed in Ireland until September and by October was back in London.

Bynoe’s later naval career was mainly spent on ships taking convicts to Australia. His journals from this period, two of which survive (from 1844 and 1851) and are now at the National Archives at Kew, give a unique insight into the life of a 19th century ship’s surgeon and the conditions endured by the crew and their living cargo of prisoners.

Bynoe did achieve some recognition during his lifetime. One species of shrub was named after him – Acacia bynoeana – and several geographical features were named in his honour, including Bynoe Inlet and Bynoe Island in Australia, a testament to how much he was liked and respected by his colleagues and crew. But, overall, he probably hasn’t had the recognition he deserves. At least here at the Royal College of Surgeons, prompted by an enquiry to our archives, we have been able to carry out some research and honour him with a more extensive obituary in Plarr’s Lives.