Botany in the age of Empire

John Ellis was a naturalist and London business man with an interest in science. The 18th century was a period of physical exploration and discovery, providing an expansion of knowledge of both the physical world and that of plants and animals.

Ellis was a linen merchant in London until 1764, when he received the appointment as King’s Agent for the Province of West Florida, and later as Colonial Agent for the Island of Dominica in 1770. These government posts were roughly the equivalent of a chief audit executive post today and, at the time, didn’t require travel to the provinces. He started his scientific work in the 1740’s and continued to research and write about natural history until his death. The RCS Library has a number of his publications which we will look at in more detail.

Ellis was very interested in economic botany and in assisting American colonial farmers by introducing plants from other parts of the world into colonial agriculture. With the cooperation of Henry Ellis, Governor of Georgia, he started experiments to find a practical way to transport viable seed over long distances and time spans. He became the most successful plant transporter of the eighteenth century. 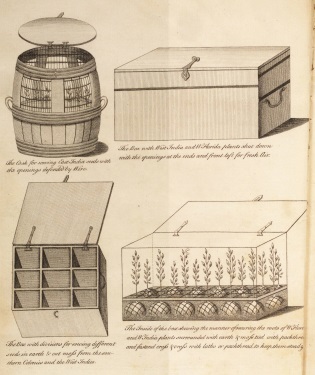 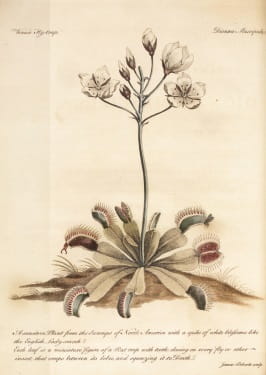 This image (above left) showing how best to package seedlings for long-distance shipment by sea is taken from his 1770 work Directions for bringing over seeds and plants, from the East-Indies and other distant countries, in a state of vegetation: together with a catalogue of such foreign plants as are worthy of being encouraged in our American colonies, for the purposes of medicine, agriculture, and commerce: to which is added, the figure and botanical description of a new sensitive plant, called Dionaea muscipula, or, Venus's fly-trap. The second part of the book is a description of a newly discovered plant, the Venus flytrap. Ellis had sent the description in a letter to Linnaeus in September 1769. His letter began: “My dear Friend, I know that every discovery in nature is a treat to you; but in this you will have a feast.” It included this beautiful illustration (above right) showing a living specimen, with a caterpillar and a moth in the throes of being digested.

He published various other works on aspects of natural history, including An historical account of coffee: with an engraving, and botanical description of the tree: to which are added, sundry papers relative to its culture and use, as an article of diet and of commerce (1774). In addition to a lovely, coloured engraving of a coffee plant (below), the book contains a list of items exported to the British West Indies for the planters living there, including fishing tackle, boots, linen, plates, hinges, nails of all sizes and snuff boxes. It is an interesting window onto a past where sailing times were measured in months. 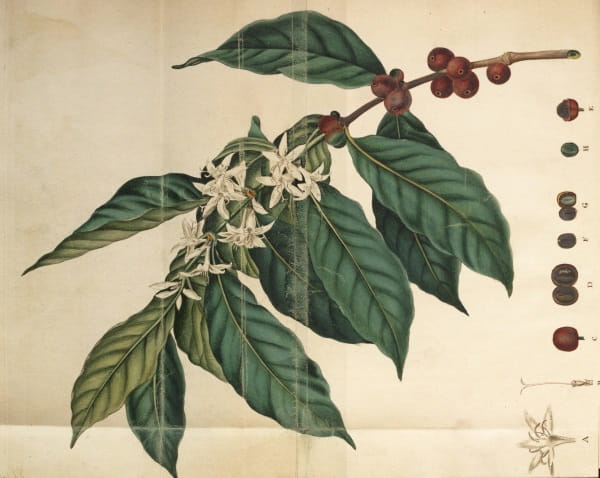 The following year he published A description of the mangostan and the bread-fruit: the first, esteemed one of the most delicious, the other, the most useful of all the fruits in the East Indies. This book contains a detailed botanical drawing of the Bread-fruit plant and of a cage designed to transport the plants across the seas, keeping them safe from salt spray and cold winds. 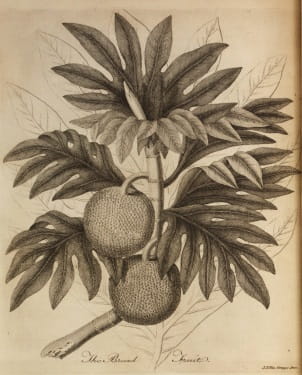 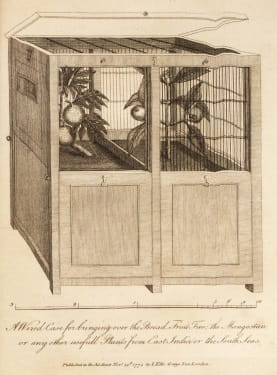 He became a Fellow of the Royal Society in 1754 and was a frequent contributor to the Philosophical Transactions where there was a lively exchange of ideas across the scientific community. He’d published An Essay towards the Natural History of the Corallines in 1755, and his research in the area established the animal nature of this group of organisms. He was awarded the Royal Society’s Copley Medal for this work in 1768. His last work, A Natural History of Many Uncommon and Curious Zoophytes, written with Daniel Solander, was published posthumously in 1776, with many fine engravings of corals and related organisms.

Ellis’s career encompassed business as a merchant and then as a governmental employee with financial responsibilities for West Florida and the Island of Dominica. His interest in economic botany combined well with this part of his career. He was embedded in the contemporary scientific community of his day, both the amateur and the professional, as a successful researcher and writer. It was an interesting and fully rounded life, reaching out around the world.