Richard Bradley (1688-1732) published The virtue and use of coffee, with regard to the plague, and other infectious distempers : containing the most remarkable observations of the greatest men in Europe concerning it, from the first knowledge of it, down to this present time : to which is prefix’d, an exact figure of the tree, flower, and fruit, taken from the life in 1721. What comes though clearly in this work is that Bradley is a serious horticulturist and coffee lover. The RCS Library has a copy of this comprehensive description of the history, cultivation and trading of coffee, plus the best way to prepare the drink. 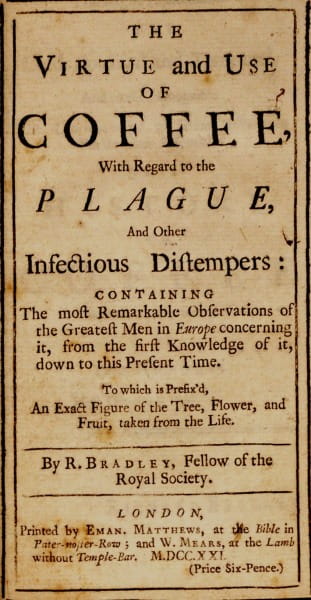 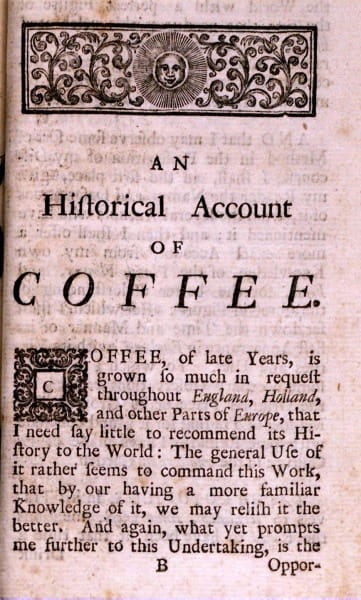 Bradley was writing as plague raged in Marseille (1720-1721) and threatened London’s busy ports. He comments that remedies prescribed by various Physicians “are little different from each other”; however, several learned men say that “coffee is of excellent use in the time of pestilence, and contributes greatly to prevent the spreading of infection”. He explains that in some parts of Turkey, where plague is almost constant, it is seldom mortal in families where they are rich enough to enjoy the free use of coffee.

Coffee was considered effective in the treatment of infectious diseases as it lifted the spirit. Bradley writes “those whose Spirits are the most overcome by Fear, are the most subject to receive infections”. Drinking coffee supported the “vital flame” protecting the drinker from fear and despair. He recommends two cups; one in the morning, the second at 4pm. He noted that coffee is not destroyed by insects or rot as most seeds are, concluding that its use would have virtue in diseases caused by insects or unwholesome air. 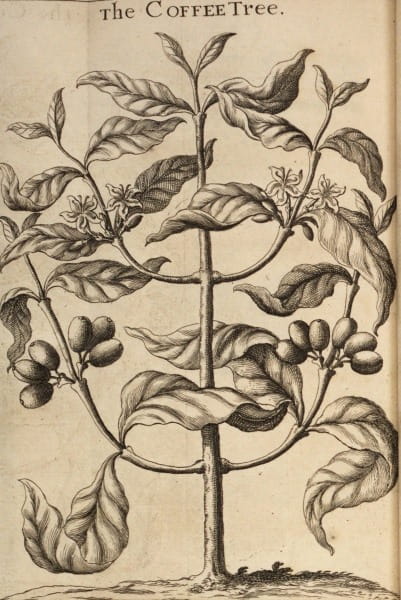 The work includes a botanical woodcut of a coffee tree drawn by his “own hand” from a tree growing in the Physic Garden of Amsterdam. It shows the leaves, flowers and berries and is followed by a detailed description of the plant and its growing season. He gives instructions on growing coffee trees from the fresh berries following the methods used in Amsterdam.

After describing how to harvest coffee berries, Bradley has “taken some pains to experience the best method of roasting it”. He recommends roasting in an iron vessel turned on a spit over a fire. His preference is for a medium roast “not overburnt”. He is against boiling the coffee as it would evaporate “too much of the fine Spirits”. Better to pour boiling water over the powder of the ground beans and infuse it for 4-5 minutes in front of a fire. Alternatively he suggests grinding the beans, adding water to the powder in a stone or silver coffee pot and leaving it in front of the fire for a minute or two. For the best flavour the beans should be warmed by the fire before grinding.

Coffee on the move is covered. He recommends packing the powder from freshly ground coffee beans into bottles when traveling. This ensures you “not be forced to take up with ill-tasted damaged stuff in some Country Village”. It is clear he has suffered from this.

A number of health claims are made for drinking coffee: it will help those afflicted with pains in the head, vertigo, lethargy, melancholy vapours, consumptions, swooning fits, aid digestion and prevent sleepiness. Modern research suggests that coffee may have some health benefits. There are studies suggesting it may protect against Parkinson’s disease, type 2 diabetes and liver disease, including liver cancer. Coffee also appears to improve cognitive function and decrease the risk of depression.

Bradley’s final piece of advice should plague reach England is to place a small piece of Myrrh in the mouth while out walking.