During the second half of 2020, the commencement of work on a new digital exhibition of rare anatomy books began. Despite the fact that the books were in offsite stores and the available images of the collection were somewhat limited, by the Autumn the text had been written and the accompanying images assembled. The books were chosen to highlight two complementary strands within the collection: the beauty and artistry of the images and the variety of audiences that these anatomical teaching works were created for. The images were intriguing, detailed and progressively more lifelike. They often reflected interesting aspects of the time in which they were created, showing incidental details such as location, dress and hairstyle as well as, sometimes, a moral hesitancy to display the human form.

At the present time, when health could not be more at the forefront of our collective consciousness, the Library’s current exhibition profiles and celebrates the beautiful anatomy texts from the Rare Books collection. The books show the importance of studying anatomy as part of a complete medical education and reflect the relationship between greater understanding of human anatomy and the rise of the successful Surgeon-Anatomist. From Vesalius challenging anatomy ‘Goliath’ Galen’s findings because they were based on other mammals and not human bodies, to William Harvey observing circulating blood through dissections of his father's and sister's bodies, anatomists had to put their reputations on the line to publish their discoveries and advance the science. As William Hunter put it ‘Anatomy is the Basis of Surgery, it informs the Head, guides the hand, and familiarizes the heart to a kind of necessary Inhumanity’ (William Hunter, Introductory Lecture to Students [c. 1780], St Thomas’s Hospital, MS 55.182). The works that form this exhibition cast light on the beliefs and practices of the times they were created in through their descriptions and illustrations.

Arguably, the details serve to elevate hidden voices in the dominant narrative showing not just the scientific exactitude of the anatomists, but also highlighting the skill of the artists realising their vision. The books act as a memento mori and can inspire us to consider the identity of the human beings who have featured in anatomy learning. In the beginning the bodies used were executed criminals or cadavers stolen from graveyards. Gradually the practice of human dissection was accepted by religious authorities and through the enactment of legislation. The benefits of such studies became apparent and texts and illustration related, as faithfully as possible, the reality of the human body.

The aim of the exhibition is to provide an interesting and thought provoking tour around our anatomy collection, the sample we’ve shown is just the tip of the iceberg! You can find this and other exhibitions at the Library's Digital Exhibitions site. 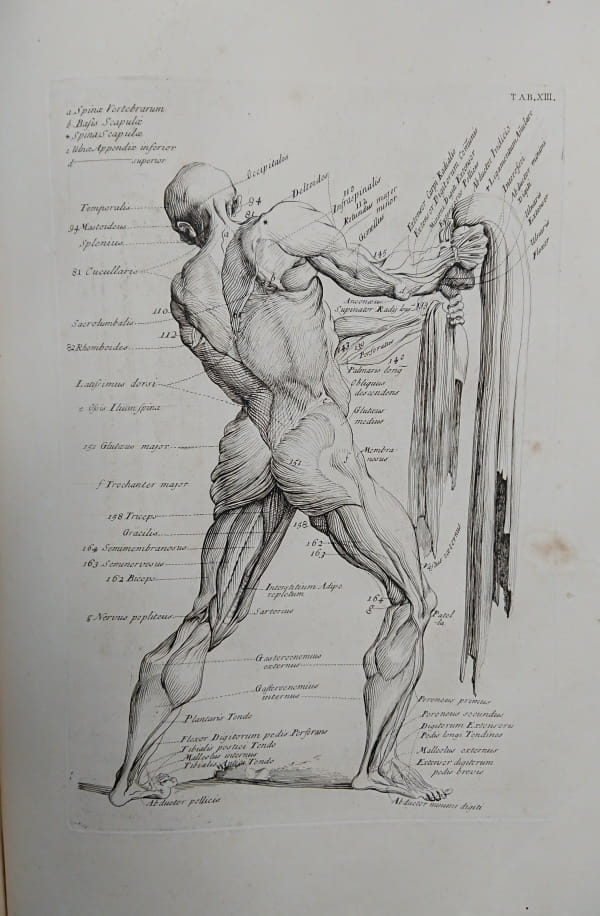 William Cowper (1666-1709). Myoromia reformata: Or an Anatomical Treatise on the Muscles of the Human Body. Illustrated with Figures After the Life... To Which is Prefix'd an Introduction Concerning Muscular Motion. 1724.

This treatise on the muscular system of the human body is the first folio edition of the work. It has the quality of the large detailed plates to recommend it. The titlepage declared ‘the true uses of the muscles are explained, the errors of former anatomists concerning them confuted, and several muscles not hitherto taken notice of described’. Cowper worked until his death on this greatly expanded edition, which was published under the supervision and at the expense of the physician Richard Mead (1673-1754). With its 66 plates, some after Rubens and Raphael, the work ranks among the most artistically inventive anatomical atlases of the 17th and 18th centuries. 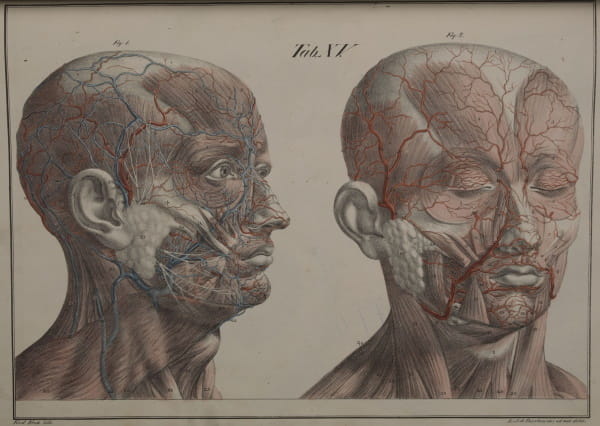 The first detailed atlas of German surgery, this work illuminated the muscles, vessels, intestines and skin. It also highlighted pathogenic changes caused by disease and combined this with descriptions of surgical anatomy and technology. All surgical interventions, including otology and ophthalmology, were included from head to toe. The images of plastic surgery are of particular interest. The book provides insight on the progress of surgical development at the beginning of the nineteenth century, one reviewer at the time noted that it was 'characterized by richness and instructive presentation...'