The dangers of tight lacing: the effects of the corset

It is London Fashion week and for some, our thoughts turn to the latest trends. What are the new colours, shapes or key items this season? In the past wearing the most fashionable styles signalled your place in society. Corsets were an integral part of women’s clothing (and some men’s) from the 16th century until early in the 19th. Practically compulsory for women of aristocratic birth, corsets were also adopted by working women aspiring to a fashionable silhouette.

Corsets were made from a stout fabric, with bone or metal inserts. Fastening at the front with hooks, the back closed with adjustable laces. Metal eyelets for corset lacing were introduced in France in 1828. This technical innovation allowed the waist to be tightly constricted, sometimes as far as 17 inches creating the fashionable hourglass figure popular during the 19th century. 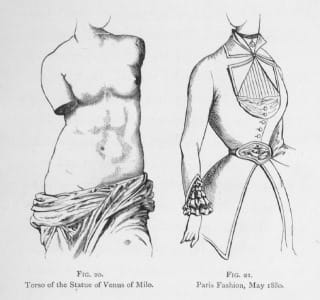 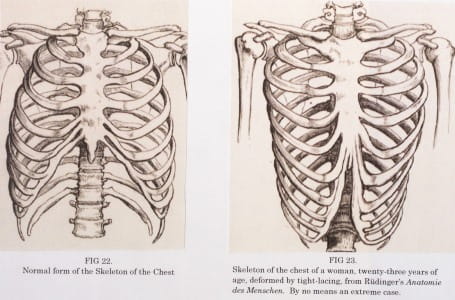 Women were often laced so tightly their breathing was restricted leading to faintness. Compressing the abdominal organs could cause poor digestion and over time the back muscles could atrophy. In fact, long term tight lacing led to the rib cage becoming deformed. The Hunterian Museum has an example of a rib cage showing damage caused by tight lacing. Doctors labelled these symptoms as Chlorosis or ‘green sickness’ and Anaemia. Blood counts were taken and patients given pills to treat the symptoms. 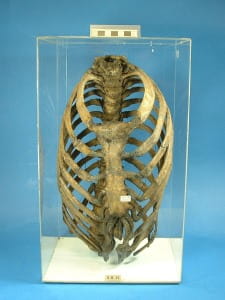 Left: The bones of the thorax of an elderly woman, deformed by tight-lacing of clothing, from the late 19th century (RCSPC/02066)

Many doctors wrote regularly about the negative effects of tightly laced corsets. In 1793, Von Sommerring published Uber die Wirkungen der Schnirbruste (“On the effects of the Corset”) to make his point that the corset constituted a health hazard by compressing the ribs and other internal organs. Other items in the College’s collections on this subject are On the ill effects of insufficient exercise, constrained positions and tight stays on young women (1833), Dress and health : an appeal to antiquity and common sense (1896) or On voluntary distortions of the human figure by artificial compression (1832). 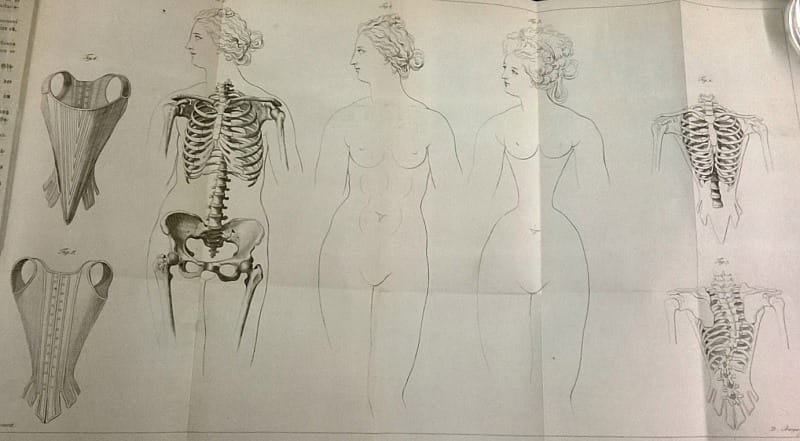 The Lancet published a number of letters about the subject: “Death from tight lacing” (14 June 1890), “Effects of tight lacing” (16 January 1892) and “Civilisation and the corset” (11 December 1909). Some of the less scientific comments noted there were less severe symptoms among married women, theorising that “the male, once captured, it was no longer necessary to charm his eye with the slender waist…”

Fashions change and after the 1st World War the new flapper dresses introduced a more androgynous shape requiring different underwear. Later articles in the BMJ, “Two diseases due to fashion in clothing” (23 May 1925), and The Lancet, “Corsets and Chlorosis” (22 March 1952), discuss the disappearance of chlorosis linking it firmly with the changes in fashion with women no longer wearing tightly laced corsets.