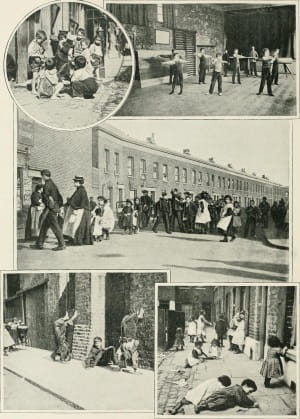 Towards the end of the 19th century, Allen Dowdeswell Graham saw and acted upon a need to provide care for sick and disabled children in London. He was 51 when he founded the charity that began as the Invalid Children’s Aid Association (ICAA) on 26 November 1888, to help poor children who were either seriously ill or handicapped. In 1888, he wrote “Poverty is bad enough, God knows, but the poor handicapped exist in a living hell. It’s up to us to do something about it.” Graham started with a group of volunteers who made home visits taking food, bedding and medicine to children and their families, and helping arrange admissions into hospitals and convalescent homes, holidays, apprenticeships, and the loan of equipment like wheelchairs and spinal carriages. Royal patronage began with Queen Victoria in 1891 and continued throughout the 20th century. These “wise and humane efforts for the diminution of suffering” did “much to mitigate the troubles of those most helpless”.

Right: the East End in 1902, from Living London; its work and its play, its humour and and its pathos, its sights and its scenes (1902), by Sims, George Robert, 1847-1922. Courtesy of the University of California Libraries at the Internet Archive, public domain. 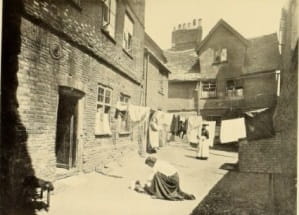 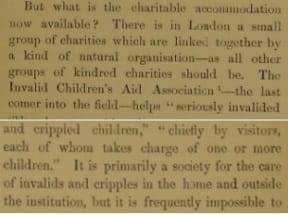 Notably in College history, one of the ICAA’s staff at the end of the nineteenth century, Eleanor Davies-Colley, later went on to become the first woman Fellow of the College. After leaving school, she worked in the East End for the charity. In a letter written at the time of her death, a close friend reflected on this time before she started her medical studies and her attitude to life in general:

With a cultured appreciation of all forms of art and a great feeling for real beauty in her surroundings she might have lived a very different life, but something drove her to renounce all this and to live a life of austerity and self-denial and continual hard work… 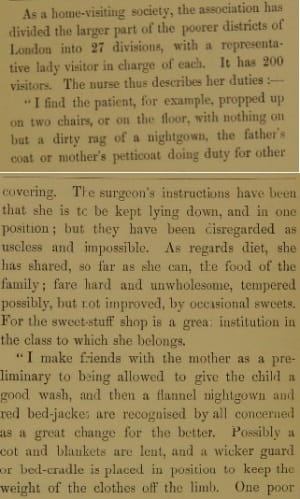 We can only speculate on how seeing the poorest and most neglected ill and handicapped children in her city affected Eleanor’s drive to help provide them with a safe point of care. Later in her career, she was instrumental in setting up the South London Hospital for Women and Children, where the treatment cost only whatever the patient could afford. A forthcoming post about that hospital will look at Davies-Colley and fellow founder Maud Chaburn’s efforts to win support for it, and the story of the hospital from ground-breaking beginnings to resisted and protested demise.

Left: Describing a typical visit to the needy, from The epileptic and crippled child and adult (1893). Courtesy of the UK Medical Heritage Library. Available under the Creative Commons, Public Domain Mark. 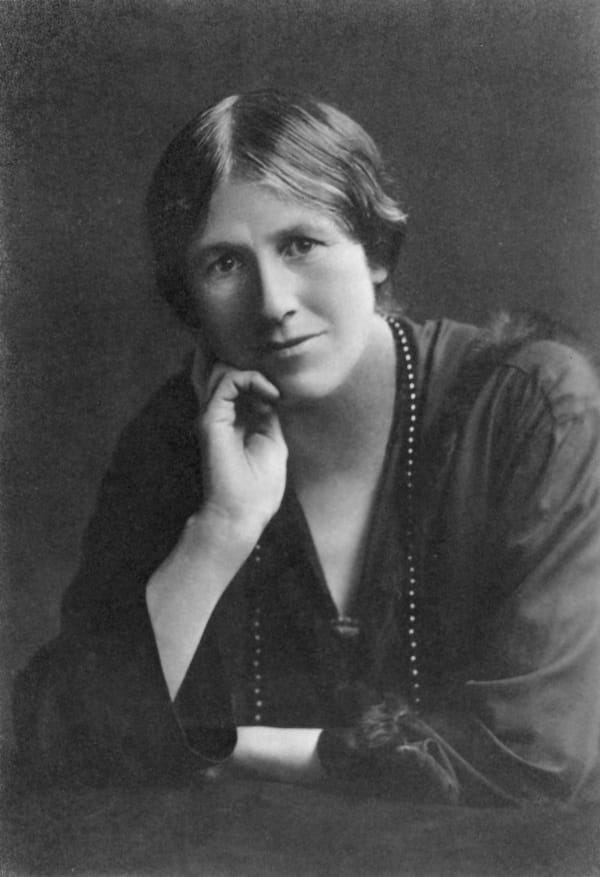 After the ICAA, Davies-Colley progressed to working as a London School Board manager, living in a “workman’s flat” in Wapping. As her friend Mrs D.C. Nasmyth remarked of this time:

She…spent some years in a cheap flat in East London studying the condition of the poor.

Both charity and school board work would have impressed upon her the miserable situation of underprivileged, vulnerable children in London at the time, and led to her fight for affordable or free hospital and outpatient care during her later medical career.

She began her medical studies in 1902 at the London School of Medicine for Women, qualifying in 1907. Davis-Colley was the first woman to be made a fellow of the Royal College of Surgeons of England, in 1911, following her successful completion of the admission examination. In 1917, she became one of the founding members of the Medical Women’s Federation. She demonstrated anatomy at the London School of Medicine, before going on to become Surgical Registrar at the Royal Free Hospital. Later on in life, she became a surgeon at the Marie Curie Cancer Hospital, and was Senior Obstetrician at the Elizabeth Garrett Anderson Hospital. Plarr's Lives of the Fellows Online contains more about the life and career of Miss Eleanor Davies-Colley.

The charity evolved too, with volunteers gradually replaced by professional social workers and soon “Homes of Recovery” were set up, where the treatment of children with tuberculosis and rheumatic heart disease was first pioneered. The first of these residential establishments was Holt Sanatorium opened in 1906 and Parkstone Home for Boys was opened in 1909. The work of the charity continued and was of exceptional importance in organising the evacuation of disabled children during the Blitz. In its current incarnation, the Invalid Children’s Aid Nationwide (I CAN) is a national registered charity (number 210031) for children with speech and language difficulties. Their archives are held by London Metropolitan Archives: City of London.