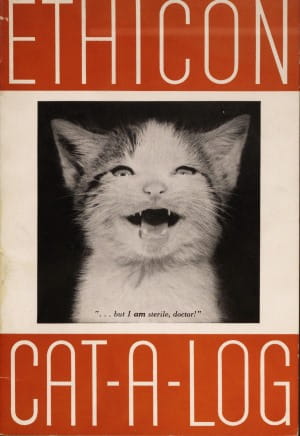 The internet is full of cats doing funny things, but this isn’t just a recent phenomenon. Harry Pointer, a Brighton photographer, was an early exponent of the craze in the 1870s. He produced humorous pictures of his pet cats mimicking human activities, quickly realising that adding captions increased their commercial potential.

In 1950 Ethicon Suture Laboratories published a booklet dedicated to the feline aimed at medical staff. Called the Cat-a-log, it consists of photographs of cute cats and kittens with amusing captions supplied by “our friends in the nursing profession”. It was a very successful idea, and four separate editions were published.

The Cat-a-log was designed to promote the surgical sutures Ethicon manufactured, who promised that the catgut used in their products was NOT taken from actual cats, as the misnomer grossly implies. The introductory page explains:

As to cats, we owe the name, at least, a salute. The larger percent of our business is in supplying with catgut - an age old misnomer for surgical gut made of sheep intestines. Further, we are happy that cats are not the source of this essential suture material, for many of us are fond of the beautiful little creatures.

The RCS Library has three editions of the Cat-a-log from 1950, 1977 and 1986 (recently discovered in our collection). They are charming booklets, reflecting the humour, attitudes and concerns of the medical profession of the time. They were incredibly popular, with thousands of copies produced. The Library’s 1950 edition is the 4th reprinting in 1953! 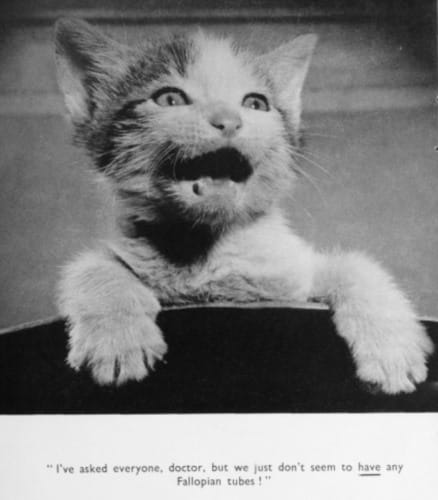 Each booklet has around 20 photos of cats posing with great aplomb. The focus is all on the cat and the lighting is perfect, each whisker can be seen: they look like stars. Just as most professions tease the naïve beginner, here one kitten has been sent to find some Fallopian tubes. Another will never trust a House Surgeon again. There are quips poking fun at fierce surgeons and powerful matrons. In the 1970 edition, two cats discuss the rumoured chance of getting a car if they go out to the district. 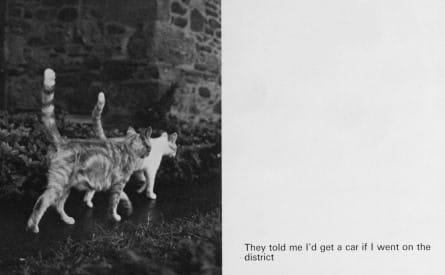 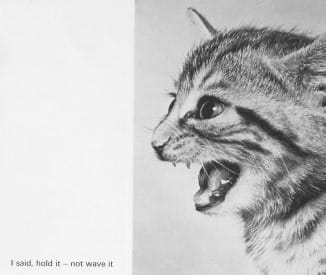 The booklets are evocative of their eras. The 1950 edition includes adverts for Ethicon’s products, which provide interesting examples of stylistic changes over time. Such ‘ephemeral’ material should be treasured just as much as more obviously historical items. They shed light on how people thought and lived.

Many of the photos were taken by Walter Chandoha or F J Higgins, described as “noted photographers of animals”. Chandoha is perhaps the better known photographer with a career that has lasted over four decades.