Frock coats to scrubs: a story of surgical attire

The clothes surgeons wear when operating on their patients has changed over time. We can trace this history through drawings, paintings, photographs and written reports. Nowadays we expect to see our surgeons operating in green or blue scrubs, wearing a cap, mask and gloves, but that hasn’t always been the case. 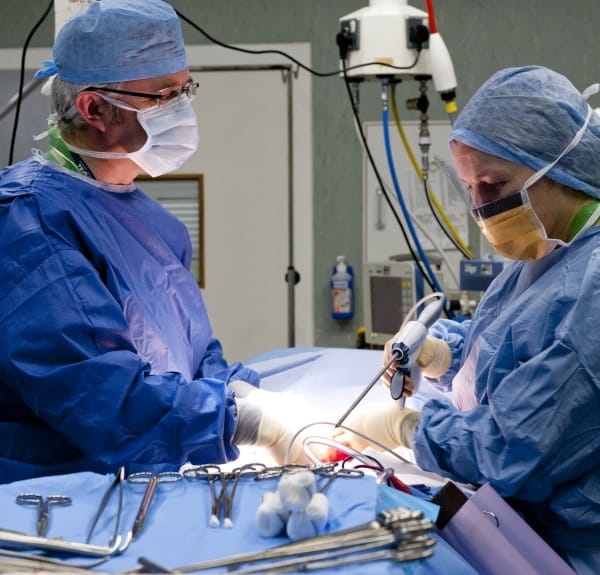 Until the second half of the nineteenth century surgery was a terrifying prospect. In an age before anaesthesia and antiseptics, patients would experience excruciating pain and risk infection or even death. Surgeons operated quickly but, without an understanding that microorganisms such as bacteria caused infections, there was little care taken to ensure cleanliness. Surgeons wore dark, unwashed frock coats, stained with blood and pus from previous operations. Some would also keep their sewing needles stuck into the lapel of their coat. In fact, a coat stiff with dried blood could be seen as a display of their experience and they worked bare handed with non-sterile instruments. In some London hospitals, the death rate after operations was over 80%. 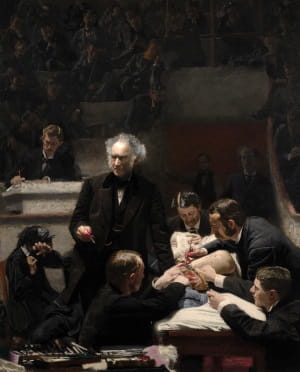 Things began to change around the middle of the nineteenth century, as ideas about the relationship between infection and cleanliness became clearer. Joseph Lister believed that microorganisms caused infections. He developed antisepsis, the removal of bacteria from instruments, wounds, and the air above the patient using carbolic acid as a sterilising agent. However, he continued to operate in his street clothes. Some surgeons covered their waistcoat and trousers with an unsterilised ‘butcher’s apron’ to protect their clothes rather than the patient.

Right: Portrait of Dr. Samuel D. Gross (The Gross Clinic), 1875, Thomas Eakins (1844–1916). Held by the Philadelphia Museum of Art, downloaded from Wikimedia Commons, and in the public domain.

Towards the end of the century, asepsis (the prevention of bacteria from entering a wound or sterile environment) gained prominence. Surgeons began to focus on excluding disease-causing bacteria from incisions. They ensured their hands were thoroughly cleaned, instruments were sterilised and they started to wear clean white gowns over their street clothes. These two images are taken from textbooks published in this period, demonstrating how thoughts on surgical attire varied. 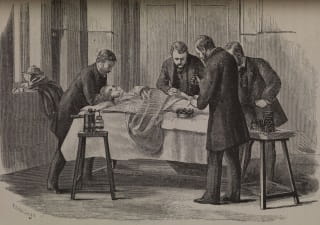 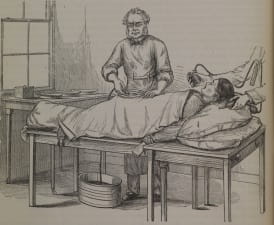 After World War One and the Spanish flu epidemic of 1918, the use of caps, face masks and rubber gloves, in addition to the white gowns, became common attire for surgeons and their assistants in the operating theatre. The purpose of the mask was to protect the surgeon from the patient’s diseases, rather than protecting the patient from infections, but these additional accessories were not universally worn.

By the 1940s, advances in aseptic techniques and a better understanding of wound infection meant more stringent measures became routine, to reduce the spread of germs in the operating theatre. Along with the sterilisation of instruments and dressings, having a standard surgical uniform was an element in the battle to prevent post-operative infections. This illustration is taken from Essentials of modern surgery by Ranald Montagu Handfield-Jones, published in 1943. 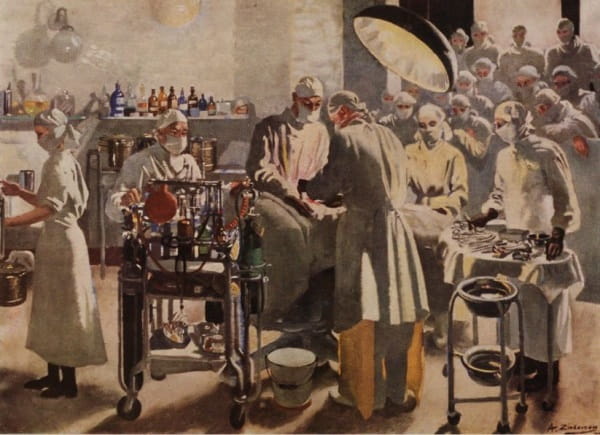 White is the colour we associate with cleanliness and was originally used for surgical gowns. Unfortunately, the bright operating lights in an all-white environment caused eyestrain. By the 1960s, most hospitals had moved to gowns in shades of green to provide a visual contrast. Originally known as ‘surgical greens’, they came to be called ‘scrubs’ because they are worn in a ‘scrubbed’ or sterile environment. 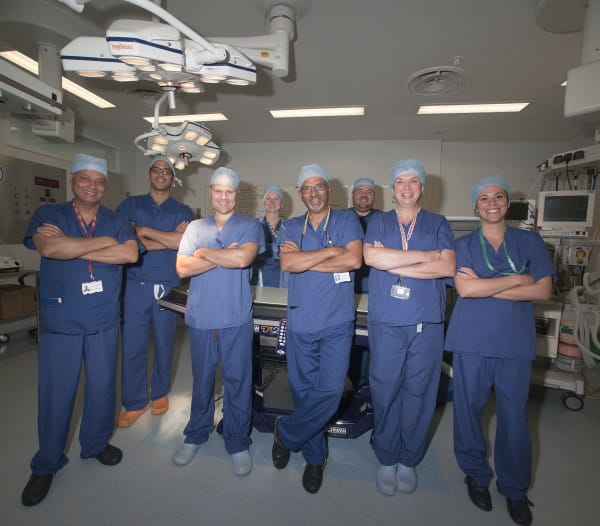 Surgical attire had largely evolved to its modern state in the 1970s. Scrubs are unisex two-piece outfits consisting of a short-sleeve V-necked shirt and drawstring trousers made out of cotton/polyester; designed to be comfortable and durable. They can withstand laundering at high temperatures for sterilisation purposes but are easily replaced. In addition to the scrubs when operating, surgeons wear a surgical gown with tie-back or bouffant-style cap to cover their hair, a face mask, latex gloves and clog-like rubber theatre shoes. We have come a long way from the blood-stained frock coat!