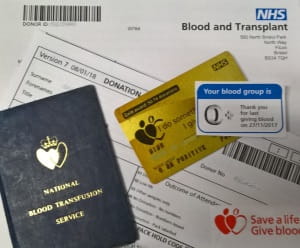 Blood transfusions save millions of lives every year, and while watching people moving through the donation process towards the all-important cup of tea, I started wondering how the blood donation service came into being.

Hospitals need 6000 units of blood every day across England to treat patients in need. It is used to treat patients who are having a major surgical procedure, or have received a serious injury (in a car crash, for example), or have an illness that causes anaemia, such as leukaemia or kidney disease. In 2014, 27% of donated blood was used in surgery, including cardiac and emergency surgery.

The circulation of blood was discovered by William Harvey in 1628, while Richard Lower transfused blood between two dogs in 1665, both animals surviving. These early experiments provoked controversy in Europe and the procedures were banned. In 1818, James Blundell successfully transfused human blood to a patient who’d haemorrhaged during childbirth. Throughout the 19th century work, was carried out towards the development of blood transfusion. The RCS Library has a number of publications from this period on the subject that have been digitised as part of the UK Medical Heritage Library project. The illustration below is from Transfusion directe du sang vivant (1882). However, before the discovery of blood types, early transfusions were risky and many resulted in the death of the patient. 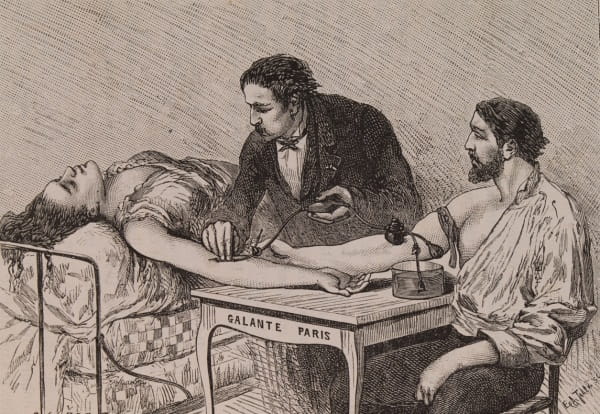 Two landmark discoveries aided the establishment of blood banks: that of blood groups in 1901, and the finding that sodium citrate was the ideal anti-coagulant in 1914. During World War 1, surgeons developed and improved blood transfusion techniques to save soldier’s lives. The experience gained in field hospitals was valuable in peacetime, but the post-war problem was the availability of donors. During the war, lightly-wounded men were invited to donate blood, and rewarded by 14 days in ‘Blighty’. Not an option in peace-time. 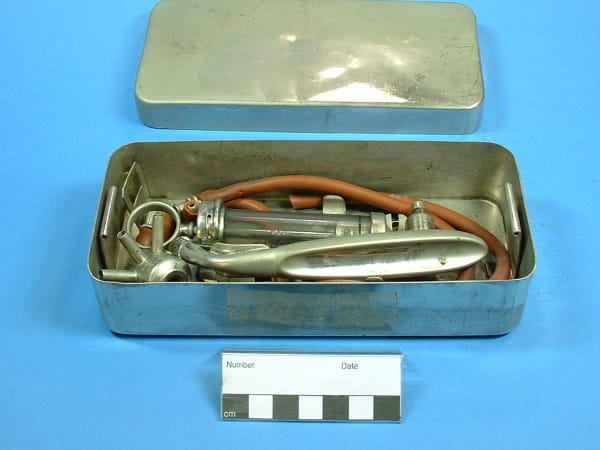 Percy Lane Oliver provided a crucial step in the way voluntary blood donation developed. He was a librarian and honorary secretary of the Red Cross, Camberwell division. In 1921, King’s College Hospital called, asking him to find a volunteer willing to donate blood to a patient. From this experience, he organised a group of volunteers who could be called on at any time to give blood. He spent his life working with the Red Cross to widen his scheme, the first voluntary blood transfusion service, which later became the National Blood Service.

He ran this free service from his home in Peckham Rye, raising most of the running costs himself and also advising other countries who were setting up similar schemes. The house has a blue plaque to commemorate his work. King’s College Hospital named a ward after him. 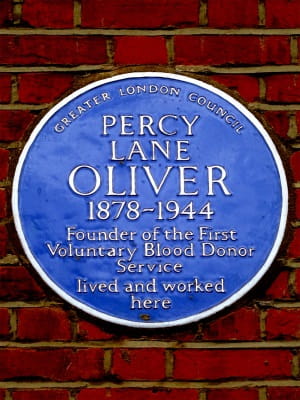 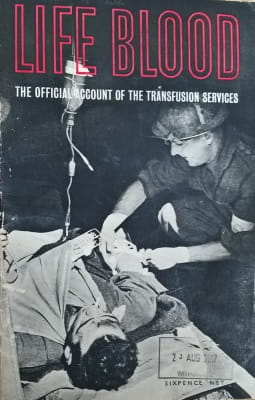 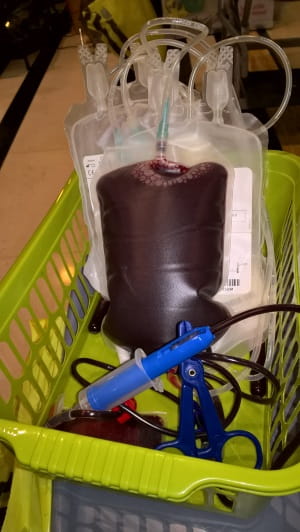 The final catalyst for the development of the modern blood transfusion service was World War 2. In 1939, the Medical Research Council prepared for the worst, setting up blood supply depots across the country. In addition, an Army Transfusion Service was set up to collect blood for the forces. While we were moving the Library collections last year, I came across a wonderfully evocative booklet, Life Blood: the official account of the Transfusion Services – Ministry of Health.

It was written in 1945 to explain to the British public why it was so important to donate blood, telling the stories of donors, old and young, and the patients who receive their blood. One is Mabel Adams who makes parachutes: her Eighth Army boyfriend has written telling her about the transfusions his pals had after being injured clearing a mine field. It explains how the blood is collected, treated and transported. In some cases, this is as dried plasma in the packs carried by medical teams of the paratroops at the D-Day landings. The booklet doesn’t just explain how the donated blood is used to save lives on the battlefields, but also how it is used at home for people injured in accidents or on maternity wards.

With the birth of the NHS, a National Blood Transfusion Service was set up in 1946 under the control of the Ministry of Health, now part of NHS Blood and Transplant. New technology and improvements continue to make this service more effective. Now every blood donation can improve the lives of up to three people. I’ll get a text later, to tell me when and where my donation has been used.