The archive collections of RCS England contain a rich breadth of material on the history of medicine. The collections include material relating to a range of surgical specialities and key themes in the history and development of surgery, for example the professionalisation of surgery, the entry of women into the profession, medical illustration and the influence of war on surgery.

Since its incorporation in 1800, the College has played a major role in the teaching and examination of surgeons. This role is comprehensively represented in our archive collections. The corporate archive, dating from the founding of the Company of Surgeons in 1745 to the present day (mostly pre-1950), such as minutes of the Court of Examiners, illustrate the strategic direction taken by the College in relation to the education and training of surgeons. Sample examination papers, exam regulations and results books demonstrate the types of subjects studied and the rigorous levels of assessment undertaken by surgeons. We also hold an extensive set of 18th and 19th century lecture notes written by students attending the lectures of eminent surgeons and scientists. Their written notes were the chief method of recording surgical knowledge and were used throughout a surgeon’s career. Our complete series of Council Minutes speak both to the College’s role in the governance of surgery and to the broader context of medical politics. 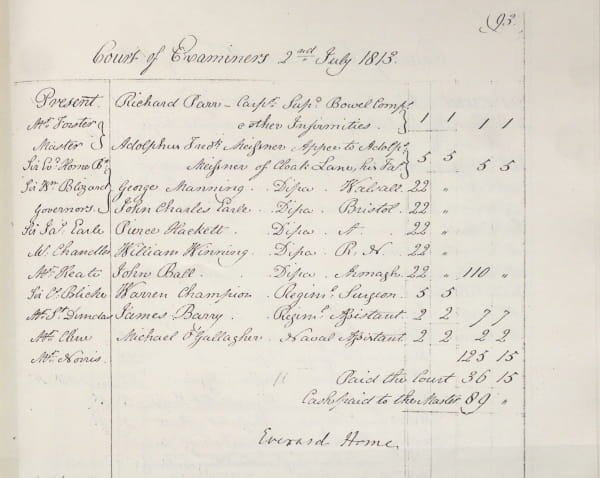 Court of Examiners Book, 1813. Among the successful candidates is James Barry, who was later discovered to be a woman. Women were not officially admitted to College examinations until 1909. (RCS-EXA/2/2/1)

In addition to its own records, the College has acquired collections of research notes, patient case files and personal papers of eminent British surgeons who were fellows of the College. Highlights include Astley Paston Cooper (1768–1841), surgeon, professor of comparative anatomy and President of RCS; surgeon and pathologist James Paget (1814–99); James Berry (1860–1946), who pioneered thyroid surgery in England; dental surgeon Eric William Fish (1894–1974); and Harold Gillies (1882–1960), who developed new procedures to reconstruct the faces of soldiers injured during the First World War. First World War surgery is well represented in our collections, other examples being John Dudley Buxton, dental surgeon William Warwick James and medical artist A. Kirkpatrick Maxwell.

Our collections reflect major medical advances that revolutionised surgical practice in the 19th century. One of our most remarkable series is the ‘Lister Rolls’, a set of six large manuscript drawings on gigantic rolls, created by Joseph Lister and his assistants as visual aids in teaching microbiological concepts in medical school lecture theatres in the 1870s – the earliest period of the ‘germ theory’. We also hold some of Lister’s research papers and our library holds the majority of his published works, some of which are annotated and given to the library by Lister himself.

Edward Jenner was a pupil of Hunter, who encouraged him to test his theories using Hunter’s scientific experimental approach. We hold Hunter’s letters to Jenner, other Jenner correspondence and a manuscript draft of the original cowpox vaccination publication. Our collections also contain letters discussing smallpox vaccinations (1806–07) and a small collection of anti-vaccination material. 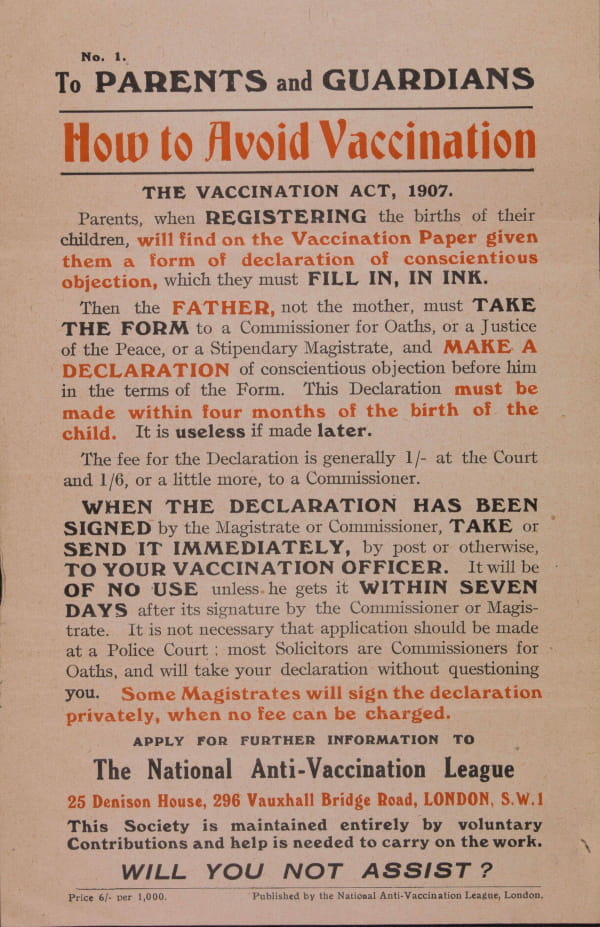 As a Place of Deposit for Public Records, RCS England archives holds some significant collections of hospital records, notably the London Lock Hospital for venereal disease and its associated rescue home for ‘fallen women’ (1746–1948). This includes a volume of biographical histories of female patients in its asylum, many of whom were prostitutes, dating from 1787–1808. This is a unique source of evidence on a group of women whose lives would have been hidden at the time.

Our collection from St George's Hospital Medical School reflects the role St George's played in training doctors and surgeons between the years 1762–1933.

RCS England archives also holds some exceptional manuscripts, for example a medicinal recipe book by the 17th century diarist Elizabeth Isham; the medical log of Christopher Bowes, a ship’s surgeon on the slave ship Lord Stanley in 1792 sailing between Africa and the West Indies.

Further details of all our archive collections can be found on our online catalogue.

Following the closure of the College building for redevelopment, RCS England archives is due to reopen in our new Research Room at Lincoln’s Inn Fields in December 2021.