Some of the smallest books held in the RCS Library collection are hospital pharmacopoeias. The word pharmacopoeia comes from the Greek pharmakon (“a drug”), and poie (“I make”). The modern definition for a pharmacopoeia is “an official publication containing a list of medicinal drugs with their effects and directions for their use”. 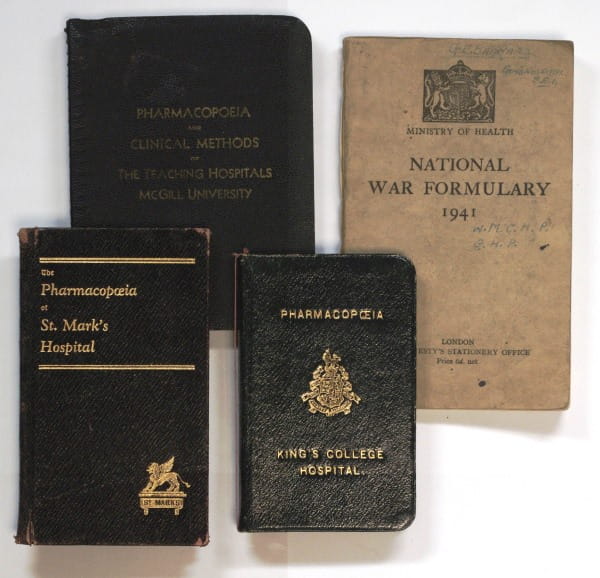 Hospital pharmacopoeias were regularly updated, small enough to fit into a pocket, and the information was condensed, often with space left for the owner to add their own notes. One reason for having an ‘in-house’ pharmacopoeia was that it saved time and money. Prescriptions in regular use form the bulk of the formulae in the pharmacopoeias: they list the medicinal substances, drugs and formulae needed to prepare various treatments for common ailments. Time could be saved by just writing the name of the prescription needed and a supply for stock could be prepared beforehand. St Bartholomew’s Hospital, London, had its own printed pharmacopoeia as early as 1730.

It is interesting to compare how pharmacopoeias change over time, the most obvious change being that the more recent ones are longer as the amount of information increases with new discoveries. 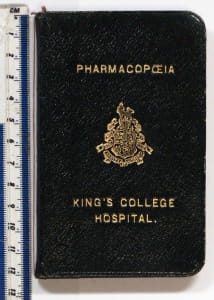 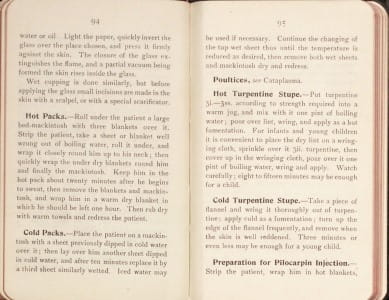 Priced at one shilling and sixpence, the 1916 King’s College Hospital Pharmacopoeia was compiled by a Committee of the Staff with the assistance of Mr E B Fairweather, Dispenser to the Hospital. In 167 pages, it covers:

One surprising set of instructions concerns how to apply leeches to a patient. Leech therapy fell out of favour in the early 20th century but is now being used again in surgery.

In contrast, the Pharmacopoeia & Clinical Methods of the Teaching Hospitals McGill University (Montreal, 1940) is larger, covering information needed for each major department, including dentistry. Like earlier texts, it provides information on poisons and their antidotes, but it also includes information on chemotherapy. This copy was owned by Janet Todd, who signed it and made notes alongside the text. 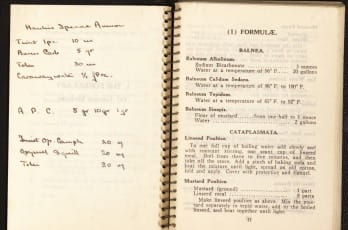 Janet Todd had previously worked at St Mark’s Hospital for Diseases of the Rectum and Colon, London. The RCS also has her signed copy of the 1935 pharmacopoeia for the hospital. This book focuses on the preparations, tables and dietary information needed for this specialist area of medicine. In addition, it covers dispensing incompatibilities, plus a summary of the Dangerous Drugs Acts and lists of synonyms.

In 1941, the Ministry of Health produced the National War Formulary. Our copy has been signed “G E Barnard, Guy’s Hospital, London”. He made good use of the space for notes using both pencil and ink, while amendment slips have been stuck into it updating the information. Designed for national use, the Formulary has information on the symbols employed in prescriptions and the abbreviations used in the book. There are sections on wartime prescribing and proprietary preparations (or, brand-name drugs as opposed to generic scientific names) for both adults and children. 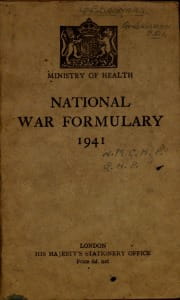 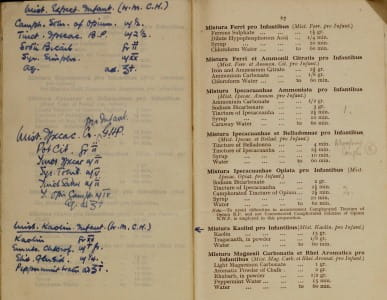 Pharmacopoeias show the development of treatment for common symptoms, alongside what was considered essential knowledge for staff working in individual hospitals. Often personal copies, we can see who owned the book and their notes. The Library’s collection of these useful little books includes some that have been digitised as part of the UK Medical Heritage Library. For example, you can access the full text of D’Arcy Power’s copy of the 1879 Pharmacopeia of St Bartholomew’s Hospital there, complete with marginal notes and a pen sketch cross section of the eye opposite p.2.