Bulletin of the Royal College of Surgeons of England, Steffi Sams

Mark Catesby was an English naturalist, who first visited America in 1712 to live with his sister Elizabeth, who was married to the Secretary of State in Virginia. During his seven-year stay, he began collecting botanical specimens, some of which he sent back to the Chelsea Gardens founded by the Apothecaries’ Society. By the time he returned to England, influential members of the Royal Society had learned of his work in the colonies and they subsequently financed a second trip. Amongst his financial backers were William Sherard, a botanist, and Sir Hans Sloane, a physician. Sloane was a prolific collector of natural history and other objects, which he bequeathed to the nation, thereby founding the British Museum. Catesby sent many botanical samples to Sherard, and they formed part of Sherard’s Herbarium, which he left to the University of Oxford. 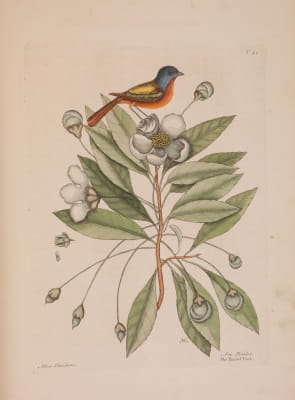 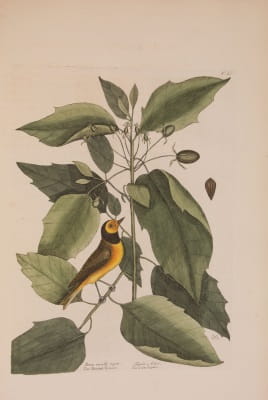 In 1722, Catesby returned to America and spent the next four years travelling through South Carolina, coastal Georgia and the Bahamas. He was the first to draw birds with relevant accompanying plants, and some of the species he depicts have since become extinct. He was also the first to discover bird migration. People had thought that birds hibernated in caves, hollow trees or the beds of ponds. 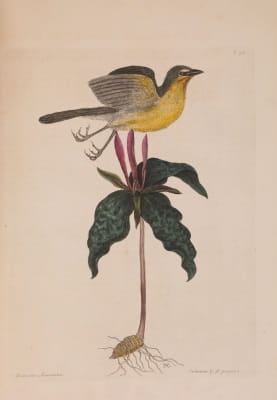 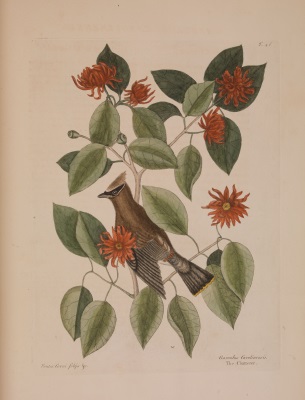 Back in London, he prepared his natural history of the region, drawing a map from his own knowledge and engraving the majority of the plates himself to reduce the costs of his venture. The natural history of Carolina, Florida and The Bahama Islands was first published in 11 sections from 1734-1747 and featured more than 200 hand-coloured etchings. It was the earliest coloured book on American birds, and its popularity was such that a second edition was required within five years of his death. The work remained unsurpassed as a scientific reference for many years. 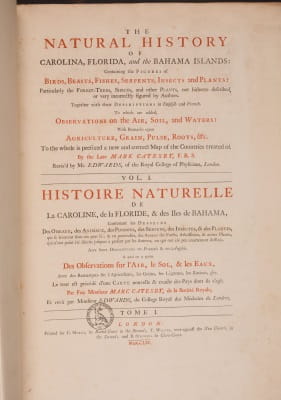 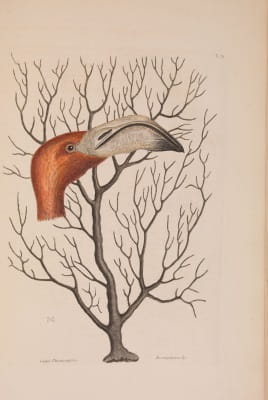 The College Library holds Catesby’s second edition, published posthumously in two volumes in 1754. However, the effects of age and use have started to show on these beautiful books. They have been assessed for conservation and the conclusion is that each volume will need to be taken apart and that the sections will require individual repair and resewing. Then it will be rebound in half leather, the spine will be lettered and new acid-free endpapers added.

The Catesby volumes are amongst the significant and rare items from our collections which are in need of conservation. The Conserve our Collections scheme was launched in 2013, and has been invaluable in enabling us to preserve some of the treasures in our collections. Your donations will help us to preserve these books for future generations to study and view in their full glory.

Find out more about the scheme and how you could help.

Content for this article was taken from the Bulletin of the Royal College of Surgeons of England: 2015, Vol. 97 No. 4 p192, originally written by Steffi Sams, Information Services Manager.