Martin Van Butchell: the eccentric dentist who embalmed his wife 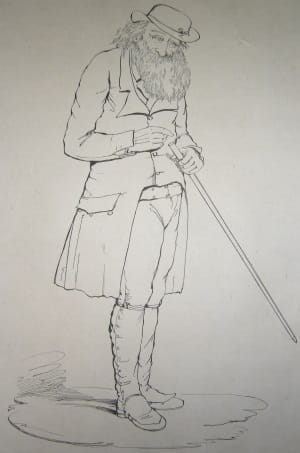 Martin Van Butchell was one of the more colourful characters in Georgian London. The story of his life and unusual habits can be read in Life and character of the celebrated Mr. Martin Van Butchell, surgeon dentist and fistula curer, of Mount-street, Berkeley-square, a gossipy pamphlet held in the RCS Library.

The son of a tapestry maker to George II, Martin Van Butchell was born in 1736. He trained as a surgeon under John Hunter and developed an interest in dentistry, possibly as a result of breaking one of his own teeth. Van Burchell set up a successful business as a dentist and maker of trusses at Mount Street in Mayfair, an affluent area then as now. His fees were high, 2 guineas for a consultation, while a full set of false teeth cost 80 guineas. An advert in St. James’s Chronicle read:

Real or Artificial Teeth from one to an entire set, with superlative gold pivots or springs, also gums, sockets and palate formed, fitted, finished and fixed without drawing stumps, or causing pain. 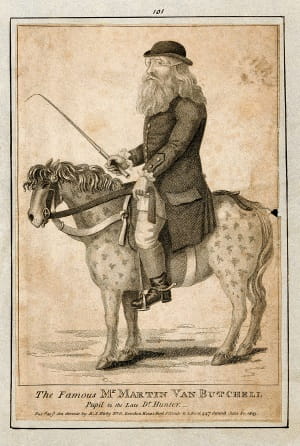 However, Van Butchell became more famous for his eccentricity and outlandish behaviour, than his abilities as a dentist, surgeon and inventor. Our pamphlet describes his curious appearance when he rode in Hyde Park. His dress was unconventional, his beard long and flowing – 8 inches according to one advertisement. His grey pony (also unclipped) was often painted with purple dots or sometimes with black stripes. He also carried a large bone attached to his wrist for protection. Some of his innovations were more practical: he invented cork-lined stirrups to keep his boots from sliding off and designed an unusual bridle which included a blind that he could “let down over his horse’s eyes, and draw up again at pleasure” if the pony took fright, or indeed if there was anything he thought unfit for the pony to see.

Possibly the oddest thing that Van Butchell did was to embalm his first wife after her death in 1775. He asked William Hunter for help and the body was injected with preservatives and colour additives to add a glow to the corpse’s cheeks. Dressed in her wedding gown with a fine set of glass eyes, her body was embedded in a layer of plaster of Paris in a glass-topped coffin, and displayed in his front room. Rumour suggested there was a clause in his marriage settlement that allowed him use of her property only while she remained above ground, or maybe it was an extreme publicity stunt. So many people came to see this unusual spectacle, that he was forced to put an advertisement in the St James Chronicle which read:

Van Butchell (not willing to be unpleasantly circumstanced and wishing to convince some good minds that they have been misinformed) acquaints the Curious, no stranger can see his embalmed wife, unless (by a Friend personally) introduced to himself, any day between Nine and One, Sundays excepted.

When he remarried his second wife, she, not unreasonably, objected to the continued presence of her predecessor in the house. The embalmed body was moved to the Hunterian Museum in 1815, where it was displayed until it was destroyed in the fire caused by a bombing raid on London in May 1941.

Among his other eccentricities were his refusal to call for his children by name, whistling for them instead. He only allowed his wives to dress in either white or black; his first wife choosing black and his second to wear white. His contemporaries described him as a very cheerful companion, always remarkable for affability although he always dined alone.

Van Butchell continued to practice into his old age, taking on his eldest son as an apprentice. He died in 1814 and was buried in St George’s Fields, London. His son, also Martin Edward Van Butchell, gained the dubious distinction of being the first British surgeon to be sued for malpractice after the death of a patient.