Holocaust Memorial Day 2021: The London medical students who helped the survivors of Belsen

At the very end of the Second World War, in May 1945, nearly 100 students from nine London medical schools were sent to help the survivors of Bergen-Belsen, the concentration camp in central Germany. The young medics worked tirelessly: by the time they left four weeks later a makeshift hospital had been established, the death rate had fallen drastically and the original huts housing the inmates destroyed. Four of the medical students went on to become fellows of the Royal College of Surgeons of England. 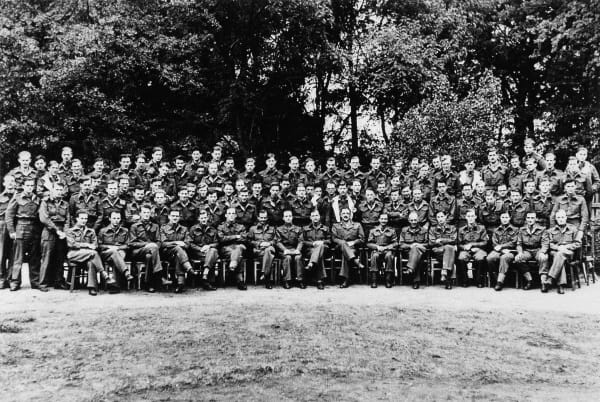 Above: 'Group photo of London Medical students who went to Belsen.' From Wellcome Images via Wikimedia Commons. Public Domain.

The camp was discovered by British troops in early April 1945 as they made their way across Germany. A local truce was arranged and on the morning of Sunday 15 April, the 11th British Armoured Division entered the camp. What they found there was so disturbing that, in subsequent years, ‘Belsen’ has become synonymous with grotesque, inhuman depravity on a colossal scale. Some 60,000 mostly Jewish inmates were in the camp, living in overcrowded huts without food, water and basic sanitation. Many were suffering from starvation and typhus. The BBC’s Richard Dimbleby was the first broadcast journalist on the scene and described the almost unimaginable horror.

The British Army immediately began the immense, urgent task of burying the dead and providing food and medical care to the survivors, but it soon became obvious more manpower – particularly specialist, medical manpower – was needed.

The deans of the London medical colleges had already been contacted in early April 1945 asking for volunteers to assist starving civilians in the Netherlands. Notices were put up for fourth year medical student volunteers and there was a rush to sign up. Uniforms were provided and the young men vaccinated, but weeks past and no summons came. Finally, on 28 April, the students were told to report to Red Cross headquarters, where they asked if they minded being diverted to Belsen. The same day they began their journey by plane to Celle in northern Germany and then on to Belsen, where they arrived at the beginning of May.

Most of the students had some idea of what a concentration camp was, the liberation of Belsen having been widely reported in the papers, but the reality was a profound shock. One of the students, Roger Dixey, recalled ‘…the powdery dust, an all-pervading smell, total desolation and a very large number of dead bodies just lying about, being bulldozed. … It was on such a huge scale it was rather like trying to count the stars.’

But there simply wasn’t time to fully comprehend what they saw. As Peter Horsey later wrote: ‘…it was no good sitting back and saying “This is awful”. One had to roll up one’s sleeves and get on with it.’ The students were assigned a hut (either singly or in pairs) and were left with the survivors. 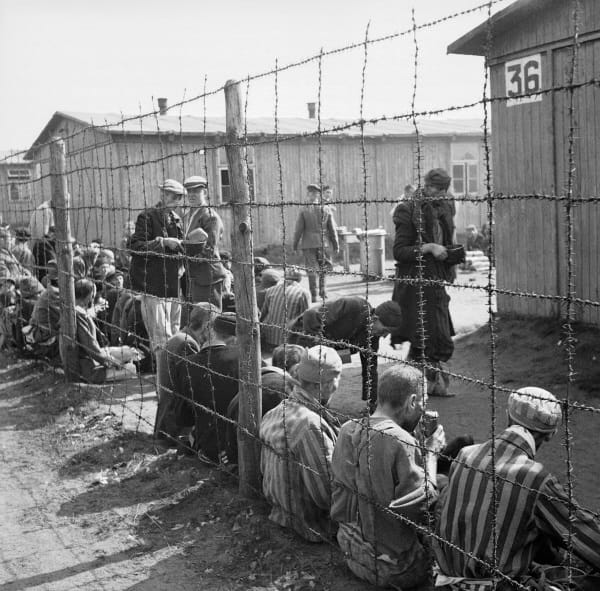 The students’ most urgent task was to help with the distribution of food. Several nutrition regimes were attempted with limited success, including normal military rations, protein/peptide hydrolysates, intravenous fluids and a famine mixture first used in Bengal. After a while, dilute soup and glucose drink was found to be the most successful, given frequently and in small doses.

The students also attempted to distinguish which survivors were fit enough to go to a nearby camp with better conditions and who should be taken to a newly-established hospital. Having been triaged, the survivors were put through a ‘human laundry’, where they were scrubbed, washed and deloused using DDT.

After a couple of weeks, once the huts had been cleared, the students were able to more properly assess the health of the survivors in the new hospital. Typhus was rife, many had TB, and all were suffering from the effects of starvation, including low blood volume, reduced heart size, oedema, distended bowels and low serum protein. 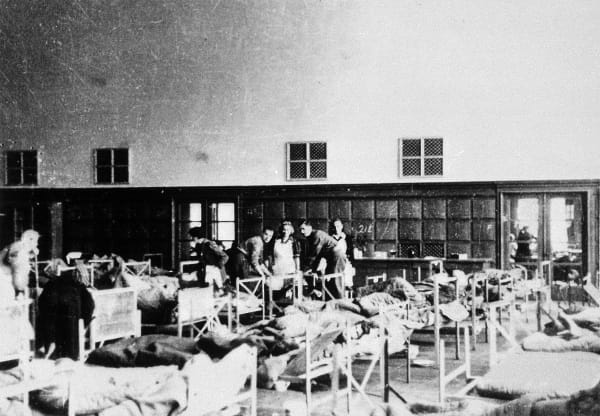 After three weeks, on 21 May, there was an official ceremony to torch the huts and raise them to the ground. By the time the students flew home a week later, on 28 May, the death rate in the camp had significantly dropped from the 1,000 a day before they had arrived: their efforts had made a huge impact on helping the survivors.

Back in the UK, the volunteers returned to their lives at medical school (although several became ill with typhus and TB and had to defer their studies). As was then the custom, there was no debrief, no formal chance to assess or come to terms with what the young men had experienced.

Four of the students went on to become fellows of the Royal College of Surgeons and had distinguished careers. John ‘Hank’ Hankinson (from St Mary’s Medical School) became a neurosurgeon at the Royal Victoria Infirmary in Newcastle, a professor of neurosurgery and president of the Society of British Neurological Surgeons. John Langford Hayward (Guy’s Medical School) was a pioneering breast surgeon at Guy’s and founder of the British Breast Group. Francis Owen Wharton Wilkinson (London Medical School) became a general surgeon with an interest in urology in Macclesfield, and Philip Metcalfe Yeoman (UCH Medical School) was a consultant to the Bath Orthopaedic Hospital and the Royal National Hospital for Rheumatic Diseases. Their Belsen experiences are mentioned in all four of their Plarr’s Lives obituaries – and in every case, it is noted how profoundly the men were affected by their time at the camp. Two (at least) could not speak about what they saw.