Postman’s Park is a tranquil garden in the City of London, not far from St Paul’s Cathedral. It’s also the site of one of the most touching memorials you can find, the Memorial to Heroic Self Sacrifice commemorating ‘ordinary’ Londoners who died while trying to save others. Individual ceramic plaques recording each story are set into the wall of a long wooden cloister. Three of the plaques bear witness to the bravery of doctors.

Alexander Stewart Brown FRCS had a successful practice at Holly Lodge in Brockley and was well known in the area. Following an accident where he’d been thrown from his pony and trap, damaging his spine, he decided a short holiday would help him to recover fully. Walking along the pier at Boulogne, while on his way to Paris, he saw a man fall into the sea. Brown succeed in dragging the man out of the water and spent two hours in his sea-soaked clothes reviving him. The man survived, but Brown caught a severe cold that turned into pneumonia. Ill, he returned to his home in Brockley where he died, aged 45. His funeral was well attended by “a large and sympathetic gathering”. His memorial plaque was one of twelve added to the cloister in December 1905.

Many Victorian children died from the highly contagious bacterial infection diphtheria. Mainly affecting the upper respiratory system, one of the symptoms is a grey/white membrane that blocks the throat making it difficult to breathe. Samuel Rabbeth’s death was the result of an act of selfless heroism. Treating a 4 year child suffering from diphtheria, he performed a tracheotomy, but the air still couldn’t reach the child’s lungs. Rabbeth sucked on the tracheotomy tube to clear the child’s airway, giving the little boy temporary relief. A few days later he developed the symptoms of diphtheria. Sadly, both Rabbeth, who was only 26, and the child died of the disease. His plaque was one of the second group to be unveiled in May 1902. 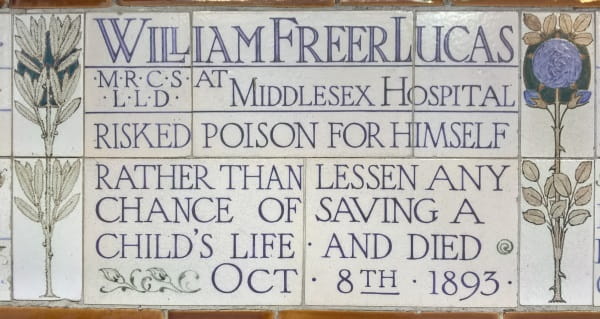 William Freer Lucas was another doctor who paid for his devotion to duty with his life. He was 23 and working as a casualty physician at the Middlesex Hospital. While he administered a chloroform anaesthetic during a tracheotomy on a child suffering from diphtheria, the child coughed into his face. Lucas waited until the anaesthetic had taken effect, before wiping his face. Ten days later he died from diphtheria. If this had happened a year later, he might have survived. An antitoxin to treat diphtheria, derived from horses, was introduced in 1894, cutting the death rate dramatically. His plaque was one of the group added in August 1908. 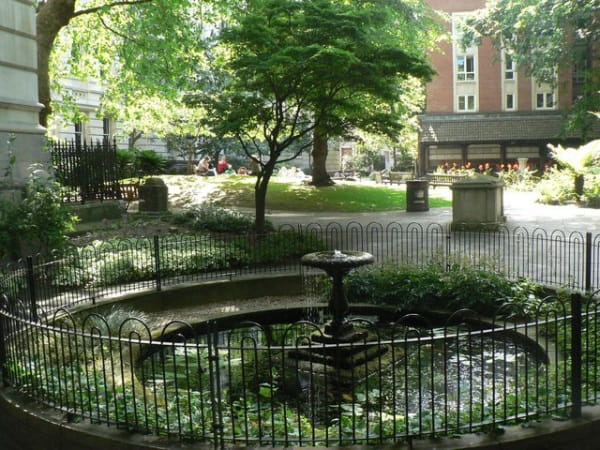 “City of London: Postman's Park The churchyard of St. Botolph Aldersgate.” By Chris Downer, 28 June 2008, from the Geograph project collection. The copyright on this image is owned by Chris Downer and is licensed for reuse under the Creative Commons Attribution-ShareAlike 2.0 license.

Postman’s Park opened in 1880 on the old burial grounds of St Botolph’s Aldersgate and was shadowed by the now long-gone General Post Office building (whose staff gave the park its name). The Memorial to Heroic Self-Sacrifice was the brainchild of George Frederic Watts, artist and social reformer. It consists of a modest wooden cloister, sheltering a short stretch of wall upon which are fixed fifty-four memorial plaques commemorating sixty-two individuals, men, women and children. The earliest case featured is that of Sarah Smith, a pantomime artist who died in 1863 and the latest is Leigh Pitt who drowned in 2007. The youngest individual commemorated is Henry Bristow aged 8; the oldest, Daniel Pemberton aged 61. The plaques are beautifully executed with an ornate typeface made in Royal Doulton china designed by leading tile designer William De Morgan. 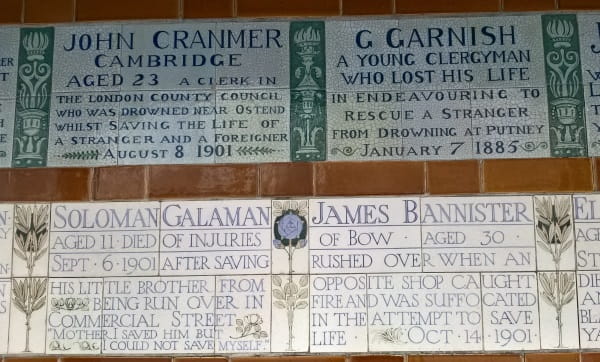 Many of the people commemorated died in ways that are rare now: scalded on exploding steam trains, trampled under the hooves of runaway horses or, in the case of two of our doctors, from a now curable disease.