Naval Surgeons and Marine exploration in the 19th century 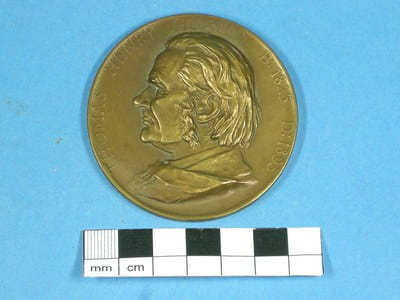 This week, the Wildlife Trusts celebrate the UK's amazing sea animals and plants during National Marine Week. This is a perfect occasion to highlight the influence of naval surgeon-naturalists on our collections.

From the late 18th century, naval surgeons and assistant surgeons often worked as naturalists on Royal Navy ships which were on scientific missions to map newly discovered regions. One such assistant surgeon was Thomas Henry Huxley (1825–1895), who passed the College’s “fitness” certificate in 1846 and went on to study marine invertebrates on HMS Rattlesnake. (Right: the Thomas Huxley Medal.)

The naval surgeons’ duties included carrying out amputations and trephinations, as well as treating genitourinary diseases, including venereal diseases and bladder stones (for more information on Royal Navy Surgeons see The National Archives: Surgeons at Sea). In addition to their medical duties, the surgeons often assisted Captains with collecting and describing zoological, botanical and geological specimens from various countries, such as the fluid-preserved skin from a bowhead whale (Balaena mysticetus) sent by John Edwards, surgeon to Captain John Ross’ polar expedition of 1818. (Below: case of lithomy instruments; skin from a bowhead whale.) 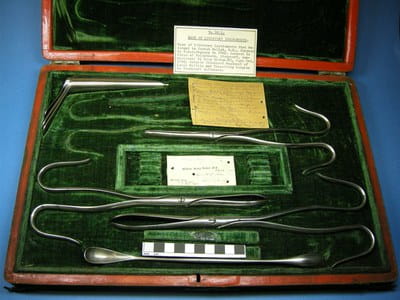 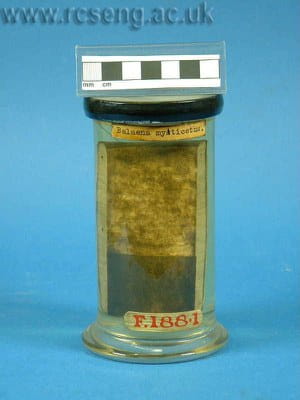 During some of the early voyages, oceanographic observations were carried out, such as the determination of the depth and nature of the bottom of the ocean at multiple locations, for example during the Ross 1818 expedition (Quekett Journal of Microscopy, 2011, 41: 531 -542) and dredging studies to assess the distribution of life in the Mediterranean from HMS Porcupine. (Below: photographic slides from HMS Porcupine and HMS Challenger.) 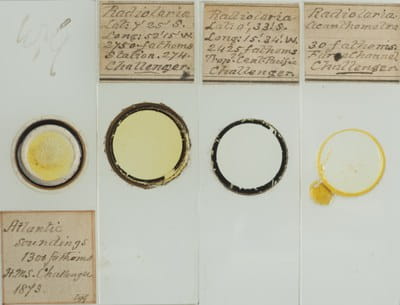 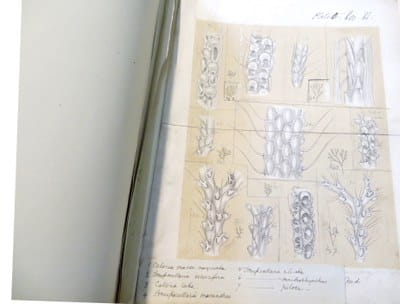 However, the seminal event in the founding of the modern science of oceanography was the 1872-76 Challenger expedition. As the first true oceanographic cruise, this expedition laid the groundwork for an entire academic and research discipline. Findings from the voyage were collated and biological specimens sent to specialist scientists, resulting in 50 large volumes and thousands of illustrations. A description of the Polyzoa (also known as Bryozoa or moss animals) collected on HMS Challenger was published in two volumes in 1884 and 1886 by George Busk, naval surgeon and President of the College in 1871. (Left: Busk proof plates.) 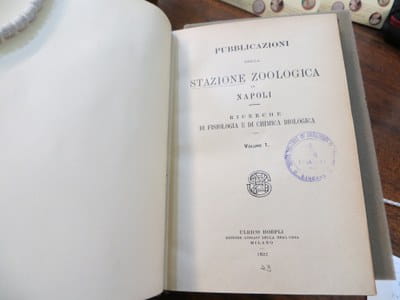 Around the same time as the Challenger expedition, Anton Dohrn founded the Stazione Zoologica in Naples. The idea behind this zoological research station was to enable researchers to stop in various parts of the world, collect specimens, make observations and conduct experiments in ready to use laboratories. In addition to renting rooms, providing support facilities and a library, the Station also published its own journal, Mittheilungen aus der Zoologischen Station zu Neapel (since 1916, Pubblicazioni della Stazione Zoologica di Napoli) which contained relevant work done at the Stazione by staff and visiting investigators. (Right: Pubblicazioni della Stazione zoologica di Napoli (1916 and 1922).)

During our on-going Collection Review, we have discovered that Charles Stewart (1840-1907), Conservator of the Hunterian Museum, had a keen interest in marine biology. In a recent survey of his microscope cabinet, we found various Stazione Zoologica slides, as well as various slides linked to his discovery of respiratory organs in the genus Cidaris. (Below: Stazione Napoli slides (a, b and c); Cidaris.) 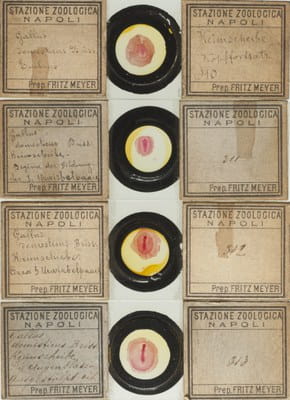