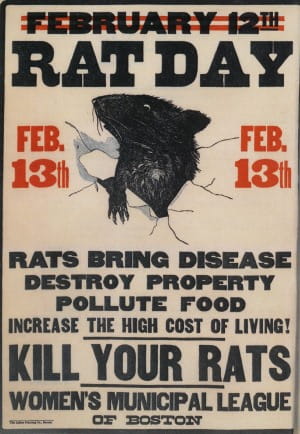 This month marks 100 years since the first and only “Rat Day”, held in Boston on 13 February 1917. The finale to the Boston Rat Campaign led by the Boston Women’s Municipal League (BWML), the day saw prizes offered for the highest number of dead rats delivered to designated sanitary yards. Rats had always been a problem in the poorer waterfront districts, but work on the subway and Charles River Esplanade had pushed the rats into wealthier areas.

The BWML was formed by upper class Boston women in 1908 “to promote civic betterment”. It focused on public health, education and social welfare, and quickly identified the health risks from rats and flies as a serious problem. The Rat Campaign, a report published by the BWML in 1917, is a fascinating read, demonstrating how it ran an effective education campaign involving the whole community.

There was a genuine risk that bubonic plague could be transmitted by rat fleas. There had been outbreaks in San Francisco from 1900-1904 and in 1907 and in New Orleans in 1914. The women started by investigating the habits and health risks of rats. They became so well informed that committee members were asked to endorse extermination methods. Their slogan was: “If we have to go to New York for our hats, New York comes to Boston to ask about rats”.

With support from the Boston Health Department, local newspapers, trade journals and religious magazines, the campaign aimed to reach the widest number of people possible. Flyers were distributed in a variety of languages, and 1,000 copies of the striking two-coloured poster were displayed throughout the city, including the platforms of Boston Elevated Railway stations. Window displays were created in pharmacies, hardware and grocers’ shops, with 1,000 cards distributed by boy scouts – even the United Cigar Stores Company placed one in each of their stores. 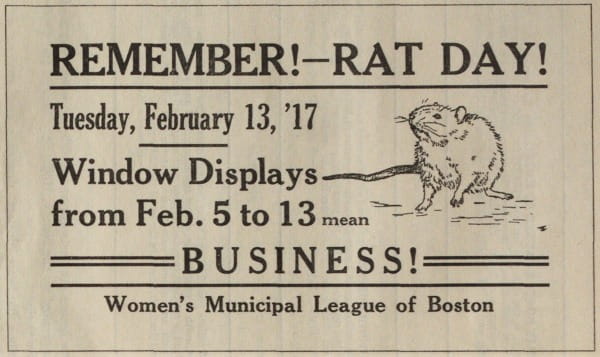 The committee commissioned the National Motion Pictures Company to produce an educational film titled The Rat Menace. It was favourably received at a private viewing attended by doctors, federal quarantine officers and city department members. Later a series of educational slides were shown in local cinemas over five weeks, drip feeding information to the public. 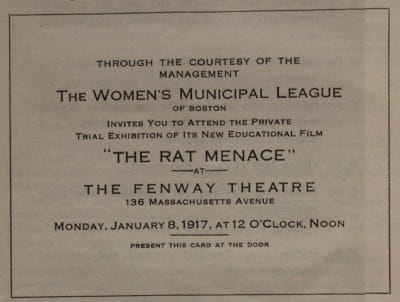 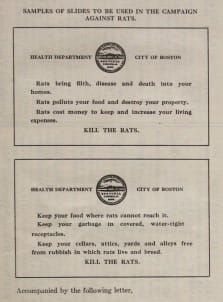 Unfortunately, as Rat Day approached, a week of very cold weather in early February sent the rat population to their burrows. This resulted in “a very small bag”, with less than a thousand rats being taken to the yards. The grand prize of $100 was won by Mr Rymkus with 282 rats, who’d read one of the circulars printed in Polish. 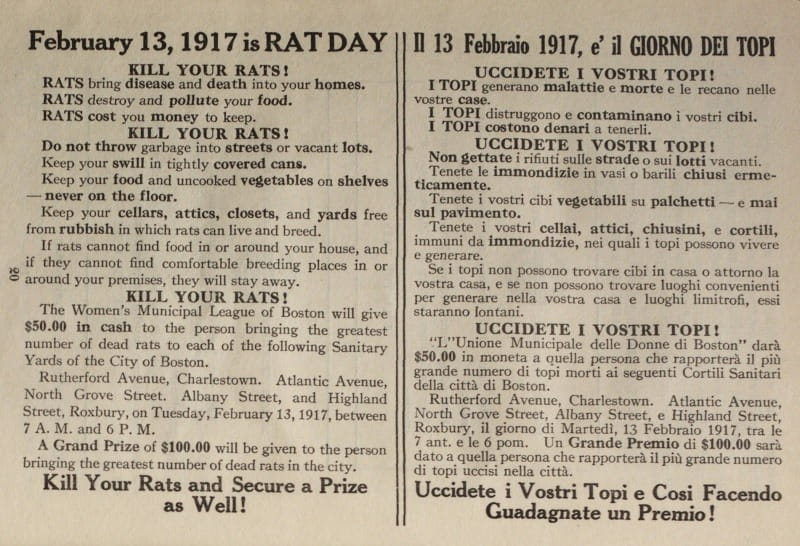 Despite the low number of rats collected, the committee’s publicity work had led to additional exposure and advertising by businesses involved in rat control, so the campaign’s success was actually much wider. The work was taken over by the Boston Board of Health and indeed continues to this day.