Sake Dean Mahomed and the Benefits of Shampooing 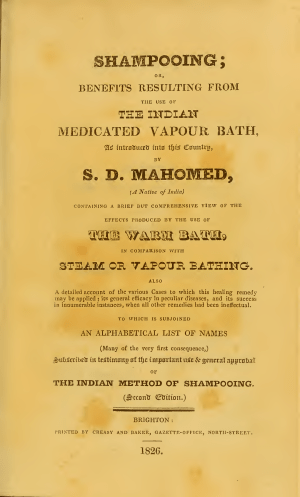 During 2015-2016, the RCS Library took part in the UK Medical Heritage Library project, sending 21,496 tracts and pamphlets to be digitised. We are currently working on integrating copies of the digitised pamphlets into the RCS online collections catalogue, SurgiCat+, to make them even easier to find. In the process, we rediscovered the wonderfully titled Shampooing, or, Benefits resulting from the use of the Indian medicated vapour bath, as introduced into this country, by S.D. Mahomed….

But who was Sake Dean Mahomed? He was born in Pana, India, in 1759. Only ten years old when his father died, he was taken under the wing of a certain Captain Godfrey Evan Baker and later served in the East India Company’s army. When Baker retired and returned to Ireland, Mahomed went with him. He met his future wife Jane there, and together they moved to London. Mahomed opened the first Indian restaurant in England in 1810, the Hindoostane Coffee House near Portman Square, but the business failed and the family moved again, to Brighton.

Brighton was already a fashionable resort attracting aristocratic visitors keen to try the seawater cures. Mahomed opened a bathhouse offering authentic Indian oils and herbal treatments, quickly followed by therapeutic steam and vapour baths and his signature ‘Shampooing’, which was actually an invigorating massage. His business became very successful, attracting upper class customers: even Kings George IV and William IV patronised Mahomed’s Baths and benefitted from the treatments. Mahomed was appointed Shampooing Surgeon to the King, and was given a Royal Warrant. Princess Poniatowsky of Poland came to Brighton in 1824 specifically to visit Mahomed’s baths, and presented the Mahomeds with an engraved silver cup after her successful treatment. 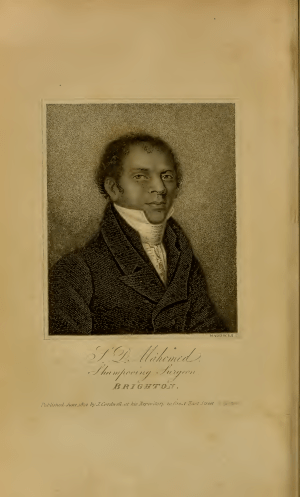 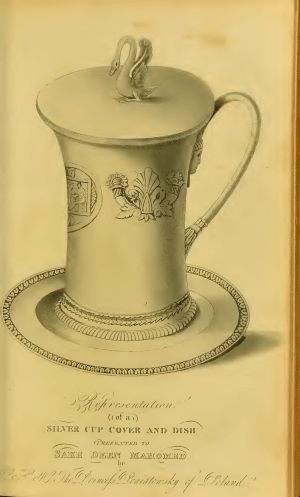 As his business grew, Mahomed publicised his achievements in newspapers and books giving details about the conditions he’d successfully treated, such as asthma, rheumatism and paralysis. Published in 1826, Shampooing, or, Benefits resulting from the use of the Indian medicated vapour bath… contained glowing accounts of treatments and effusive letters of thanks written by former patients. Divided into chapters covering different ailments, each chapter starts with a description of the illness and the usual methods to treat it. This is followed by several of Mahomed’s cases, here is one of the shorter accounts.

Having been afflicted with a contraction of the knee, which was occasioned by a violent inflammation of the nerves, I was recommended to try Mr. Mahomed’s Vapour Baths and Shampooing, which perfectly cured me in the course of three weeks. 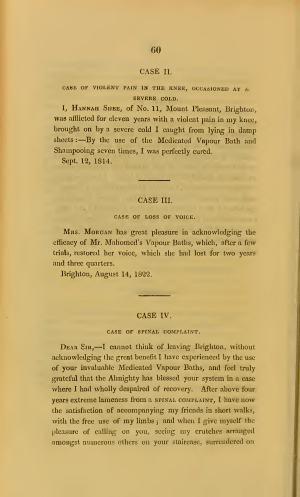 Other patients put their words into verse. Not all of the testimonies were spontaneous, one reads: “In compliance with your request of yesterday’s date, I feel much pleasure in stating, for the benefit of whomsoever it may concern, that, in the year 1816, I was completely crippled from contractions in both legs, and that from the use of your bath for six weeks, I found myself greatly recovered…” Not so different from online review testimonials today.

The case histories are interesting to read as they give us a glimpse of the disorders the Georgians suffered from and how long some people were afflicted with them.

Mahomed died in February 1851, just two months after the death of his wife Jane. They are buried at St Nicholas’ Churchyard in Brighton.