Shakespeare Again - This time a forgery 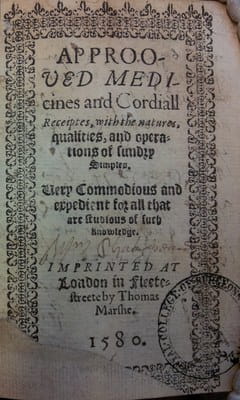 After the recent debate as to whether a portrait on the title page of John Gerard’s Herball shows William Shakespeare, we were yesterday reminded by an enquiry that another item in our collection has a connection to Shakespeare.

This relates to the forgeries of William Henry Ireland, who in 1794 started forging documents and claimed to have discovered books belonging to Shakespeare with his annotations. Initially he did so to please his father, Samuel Ireland, who was an antiques collector and Shakespeare aficionado. William bought books from London bookshops and then added comments in the margins, as well as Shakespeare’s signature to the title pages. He seems to have become addicted to producing more and more forgeries, going as far as ‘discovering’ two previously unknown plays, Vortigern and Rowena and Henry II.

The enquiry we received related to Approoved medicines and cordiall receiptes, with the natures, qualities, and operations of sundry samples. Very commodious and expedient for all that are studious of such knowledge, by Thomas Newton, 1580. When we opened our copy, we found a note by William Le Fanu, long-time librarian of the RCS library (including the turbulent years of WWII), drawing attention to the forged Shakespeare signature. The front flyleaf also contains this handwritten note:

This work containing some forgeries of the writing of Shakespeare was purchased at the sale of the effects of W. Ireland [..] the author of the fictitious tragedy of Vortigern and Rowena

presented to the Royal College of Surgeons by Richard Welbank. 1848

Richard Welbank was one of the original 300 Fellows of the College and the first elected by his peers to the Council of the Royal College of Surgeons in 1843. 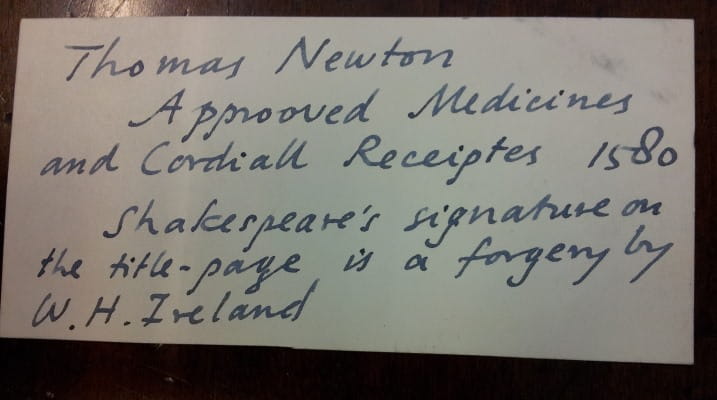 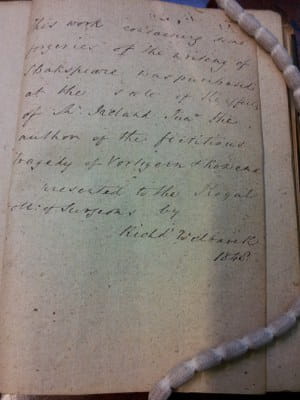 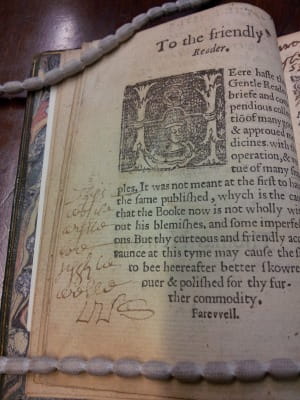 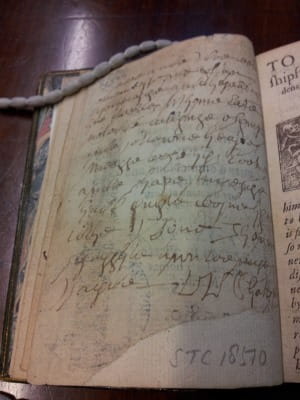