Sir Hugh Cairns and the origins of the motorcycle helmet 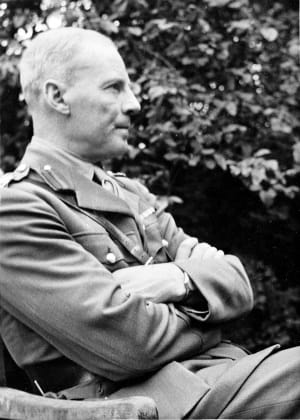 When T E Lawrence (‘Lawrence of Arabia’), one of the most enigmatic and romantic figures of the First World War, was fatally injured in a motorcycle accident in May 1935, his doctor, the young Australian neurosurgeon Sir Hugh Cairns, realised that his life might have been saved if he had been wearing a helmet. Cairns went on to research and campaign for the use of motorcycle helmets in the UK.

The young Thomas Edward Lawrence, newly graduated from Oxford University and then working as an archaeologist in the Middle East, volunteered for the British Army soon after the outbreak of the First World War. He became involved with the Arab Revolt, liaising with the Arab rebels on behalf of the British, and participating in and leading raids against the Ottoman Army. His exploits first came to the attention of the British public via sensational reports by the American journalist Lowell Thomas, and after the war Lawrence added to his own mystique by recounting his adventures in his book, Seven pillars of wisdom.

Once he had returned to the UK, Lawrence briefly worked as a diplomat in the Foreign Office and then, in 1922, discontented with civilian life, enlisted in the Royal Air Force under an assumed name. On 13 May 1935, aged 46 and just two months after leaving the RAF, he was riding his Brough Superior SS100 motorcycle in Dorset when he swerved to avoid two boys on bicycles. He was thrown over the handlebars of his motorbike on to the road, fracturing his cranium. Lawrence was taken to Bovington Camp Military Hospital in a coma, but died six days later without regaining consciousness. An autopsy revealed severe lacerations and damage to his brain.

Above: T.E. Lawrence on his Brough Superior in 1925 or 1926. Wikimedia Commons: Public Domain.

One of the doctors treating him was the neurosurgeon, Hugh Cairns. Cairns qualified in Adelaide and, like Lawrence, served in the First World War, seeing active service in the Middle East and France. He then attended Balliol College, Oxford, on a Rhodes Scholarship and held junior posts at the Radcliffe Infirmary and the London Hospital. Deciding on a career in neurosurgery, he went to Boston on a Rockefeller Travelling Fellowship, learning from Harvey Cushing. When he returned to the UK, Cairns was appointed to Maida Vale Hospital and then the National Hospital Queen Square. In 1937, he became the first Nuffield Professor of Surgery at Oxford and went on to found the neurosurgical unit at the Radcliffe Infirmary.

Cairns was deeply affected by the Lawrence’s death and, as he recorded in his diary, as a consequence began to study head trauma caused by motorcycle accidents. Although motorcycle helmets had been invented in 1914, when Eric Gardner, a medical officer at the Brooklands Race Track, instructed a Mr Moss of Bethnal Green to make a canvas and shellac helmet for riders, they were generally used only for racing.

At the start of the Second World War, Cairns became an adviser on head injuries to the Ministry of Health and a consulting neurosurgeon to the British Army. He researched head trauma among military dispatch riders and wrote a highly influential report, published in October 1941 in the British Medical Journal (“Head injuries in motor-cyclists. The importance of the crash helmet.” Br Med J 1941; 2:465). In the paper, he showed that 2,279 motorcyclists and their passengers had been killed in accidents in the first 21 months of the war, with head injuries the most common cause of death. Of the seven instances Cairns found of motorcyclists injured when wearing crash helmets, none of the accidents proved fatal.

In November 1941, it was made compulsory for military motorcyclists to wear helmets while on duty. In a follow-up study, published in 1946, Cairns showed “After the crash helmet was made compulsory in the Army there was a considerable sustained fall in the total death rate of motor-cyclists in Britain”. He concluded: “…there can be little doubt that adoption of a crash helmet as standard wear by all civilian motorcyclists would result in considerable saving of life, working time and the time of hospitals” (“Crash helmets” Br Med J 1946; 2:322).

Sadly, it wasn’t until 1973 – more than 30 years after Cairns’s initial 1941 report – that it became compulsory to wear motorcycle helmets in the UK. Although Cairns had died of cancer in 1952, it was his research, triggered by his regret at not being able to save the great Lawrence of Arabia, which directly led to the legislation. Cairns (and Lawrence) undoubtedly saved countless lives.