This month, April, marks 40 years since the beginning of the Falklands War. Many military doctors served with distinction in the campaign, but Captain Steven Hughes, the regimental medical officer of the 2nd Battalion the Parachute Regiment (2 PARA), was the only doctor to serve at the frontline of two major land battles – at Goose Green and Port Stanley. He became a fellow of the Royal College of Surgeons of England in 1987. 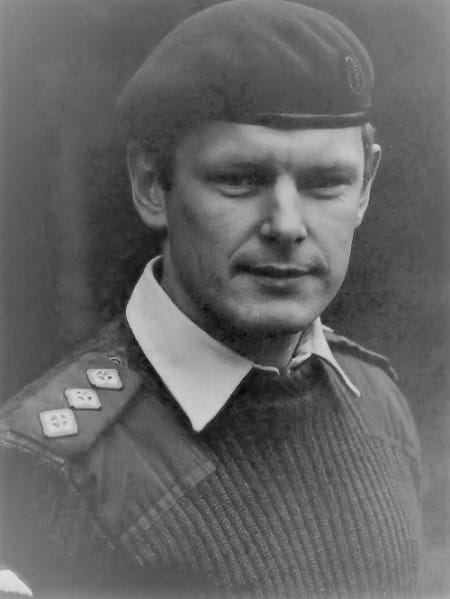 Image reproduced with kind permission of The Airborne Assault Museum

In January 1982, aged just 24, Hughes joined 2 PARA as their regimental medical officer. He was preparing for a six-month tour of Belize, when, on 2 April, Argentinian armed forces landed on the Falkland Islands, a British dependent territory in the South Atlantic. The UK government immediately responded by assembling a ‘Task Force’ of ships to transport troops to the islands, and on 26 April, 2 PARA sailed in the MV Norland from Portsmouth.

Realising that casualties could be high and that there were few medics among the paras, Hughes spent a large part of the voyage hastily organising an intensive training programme in the care of the wounded. He also arranged for the troops to carry their own basic medical kit, including field dressings, a half-litre of intravenous fluid and a syrette of morphine (taped to the inside of their helmets).

On the night of 21 May, Hughes landed on the Falklands as part of the first beach assault group and, with his regimental aid post team, marched to the base of the Sussex Mountains. Five days later, they moved on again at night, towards Darwin. On the march, over difficult terrain, Hughes fell in the darkness. As he later wrote in his personal account of the campaign: ‘I turned my ankle quite severely and felt something go. The air turned blue, and my ankle would have been the same colour, I am sure, if I had taken my boot off. But I knew it would swell up and I would be unable to put the book back on again. So I did the opposite, I tightened my lace to give me as much extra support as possible, and limped on.’ Knowing the paras needed his medical skills, he realised evacuation wasn’t an option.

In the early morning of 28 May, the battalion was ordered to move towards Goose Green, where the Argentinians had established a garrison. An intense battle raged, and, under fire, Hughes retrieved casualties, treated the wounded and helped evacuate injured paras and Argentinians via helicopter. It was his first experience of battle, which he later described in a TV interview as ‘…numbing…an abyss’.

During that day he also learnt of the deaths of his commanding officer Lieutenant Colonel ‘H’ Jones, and two of his friends, Captain Dave Wood and Captain Chris Dent. ‘I was devastated. I wanted to cry, with anger, fear and frustration, but there was more work to do. I had to set an example for the others who were also feeling personal losses, perhaps more so than myself.’ By night fall most of the Goose Green peninsula had been taken and the next day the remaining Argentinians surrendered.

Hughes moved on to Bluff Cove by helicopter and later to Fitzroy. On 8 June, two ships, the Sir Galahad and the Sir Tristram were attacked by air off Fitzroy and badly damaged. Hughes ran to the shore and helped the survivors who had managed to evacuate in a landing craft. With Captain Peter Coombes, Hughes then took the empty landing craft back out to the Sir Galahad to look for more casualties. ‘I was somewhat nervous about sailing towards a potential time bomb,’ he remembered ‘so I lit up my remaining King Edward cigar. After all, one more flame wouldn’t make much difference.’ Once they reached the wreck of the ship, it was clear most of the casualties had been lifted off, so they ‘…rounded up the remaining life rafts floating in the bay, one or two of which had casualties amongst their survivors. These we ferried back to the shore.’

The troops of 2 PARA went on to take Wireless Ridge, close to the capital Port Stanley, and on 14 June, Hughes heard of the surrender of the Argentinian forces. He later recalled: ‘As I walked up to Main Headquarters on the ridge overlooking Stanley and saw the unimpressive capital for the first time, the message came over the radio that the surrender had been made. I heard the message and as the others rejoiced I wandered off to be on my own. As I looked down onto Stanley the tears and sobs welled up. The relief uncapped all the pent-up frustration and suppressed grief; it was finally the time for self-indulgence.’ 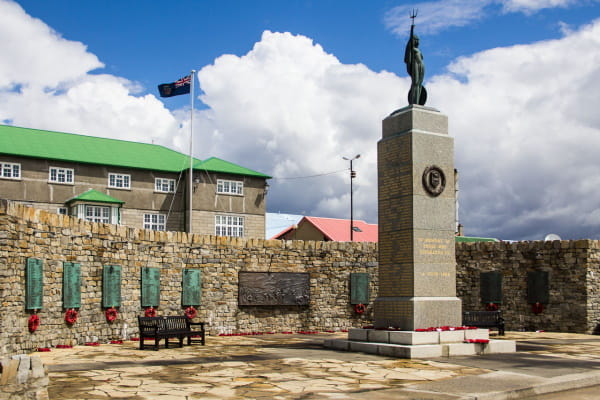 Hughes’ initiative in organising basic medical training on board the MV Norland and his insistence that the troops carry some basic medical supplies undoubtedly saved lives. And he was part of a wider, exceptional medical team, whose actions meant all the wounded soldiers evacuated from the frontline survived. He was mentioned in despatches for his bravery.

Hughes retired from the Army in 1986. He was a senior registrar in orthopaedics in Oxford, then worked as a trauma surgeon in the United States and as a consultant in hand and microsurgery in Australia. From 1999 to 2012 he was an orthopaedic consultant with the Heart of England NHS Trust. After his retirement from the NHS he worked in Abu Dhabi for several years.

Hughes was deeply affected by his experiences in the Falklands and, like many others, suffered from post-traumatic stress disorder. He helped raise awareness about the condition, researched and wrote about his experiences, and helped raise funds to support veterans. He died in 2018 aged 60.

Quotations from: Arthur, M. Above all, courage: Personal Stories from the Falklands War. London: Cassell Military, 2002 (a longer extract can be found as ‘Doc Hughes’ personal account of the Falklands Campaign’  from ParaData: A living history of The Parachute Regiment and Airborne Forces); and Falklands Combat Medics, directed by Gordon Main, Cardiff: Barefoot Rascals, 2012.