The Toothache: imagined by Horace Mayhew, realised by George Cruikshank, 1849

One of the most amusing books in the Library concerns the story of one Victorian gentleman’s toothache. The book is actually a long comic strip that folds out accordion-style from the covers. His torment is described in forty five scenes as he is woken by the pain of his tooth, makes various attempts to cure himself and his final recourse to the dentist. 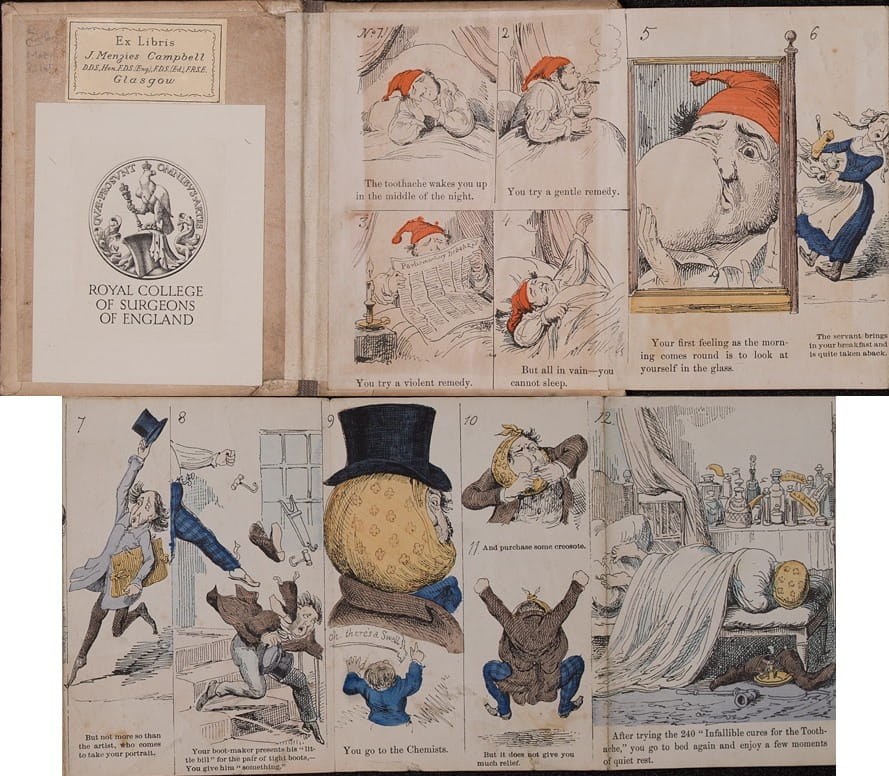 Anyone who has been woken up in the night by a toothache will sympathise with his feelings, as he tosses and turns before he is forced to get up and find a painkiller. He is miserable, visits the Chemist and treats himself with a poultice all to no avail. He goes to the dentist. As the door is opened, the pain disappears. He is cured, leapfrogging a post in celebration but it is premature, in the night the toothache returns. He tries more remedies but still the toothache rages. 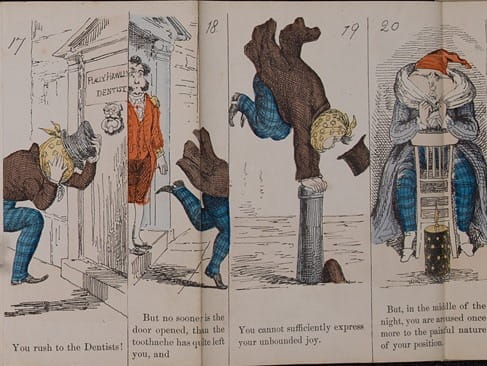 Finally he returns to the dentist: a scream from the next room nearly sends him home again, but he is determined. He sits in the chair and a titanic battle ensures between the dentist and the tooth. At last the tooth is removed! Bliss, he hugs the dentist and all is well in the world again.

You can feel his relief that the torment is over. When the book was created, there was essentially only one treatment for toothache: yank the tooth out. Painful, but hopefully quick. Joseph Priestley had discovered nitrous oxide (laughing gas) in 1772 and Sir Humphry Davy had started experimenting with it as early as 1800. He understood that the anaesthetic gas would be perfect for short, minor dental procedures. Soon, dentists were using it and visiting the dentist started to become less traumatic. 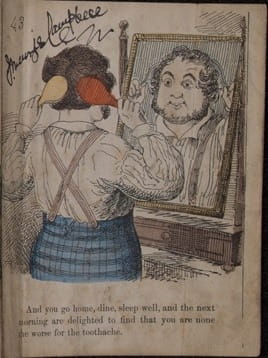 Published in 1849, the illustrations are hand-coloured, wood engravings with humorous captions that fold out to give a panoramic view of the story. The Toothache is described as imaged by Horace Mayhew and realised by George Cruikshank – a match made in heaven. Horace Mayhew (1816-1872) was a 19th century London journalist who worked at the satirical magazine, Punch. A friend of Charles Dickens and younger brother to Henry Mayhew, he is described as a handsome, captivating man, a brilliant talker and raconteur who was very popular in society. George Cruikshank (1792-1878) was an artist, caricaturist and illustrator who began his career with satirical political cartoons and was praised as the “modern Hogarth” during his life.