Vaccination, Medicine and the Masses

Vaccination is a medical procedure that is familiar to most of us. From babyhood to our later years, we are offered vaccinations to fight an ever-changing roster of diseases. While vaccination may be commonplace, it has also been long been a politically charged issue.

The Hunterian Museum’s new exhibition, Vaccination: Medicine and the Masses, charts the turbulent history of vaccination from the late eighteenth century to the present.

In 1798, Edward Jenner first published his experiments with vaccination following the discovery that a person could be rendered immune from smallpox by being infected with cowpox, a much less dangerous disease.

The exhibition contains a draft manuscript of Jenner’s An Inquiry into the Causes and Effects of the Variolae Vaccinae, as well as letters Jenner wrote following his dramatic findings. “You will be gratified in hearing that I have at length accomplished what I have been so long waiting for, the passing of the vaccine virus from one human being to another by the ordinary mode of inoculation”, Jenner wrote to a friend. Both the manuscript and letters are from the College archives. 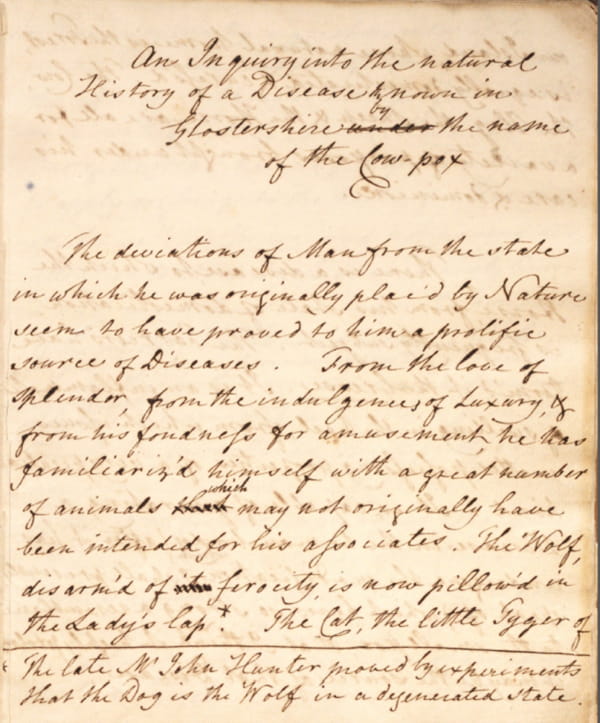 Above left: First page of the draft manuscript for Edward Jenner's paper on the cow pox, titled: An Inquiry into the natural History of a Disease known in Gloucestershire by the name of the Cow-pox, c. 1798 (MS0016/1). Above right: First page of a letter from Edward Jenner to Dr. Gardner detailing the account of Jenner's vaccination of James Phipps, 19 July 1796 (MS0016/2/8).

While many welcomed vaccination, it also provoked resistance. Some members of the public disliked the idea of being subjected to this novel and rather invasive procedure or feared it would give them blood poisoning. When smallpox vaccination was made compulsory in Britain in 1853 resistance increased, leading to protests across the country.

While today it is accepted by the majority of the population, vaccination still generates heated debate. The alleged link between autism and the MMR (measles, mumps and rubella) vaccine for example, has been roundly discredited. Yet the issue still generates controversy online and in the press. 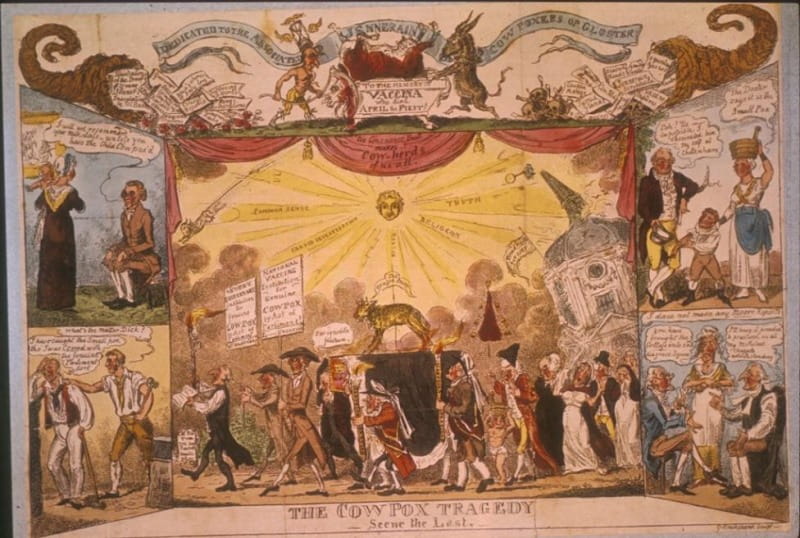 Above: George Cruikshank, The Cowpox Tragedy, 1812. A cartoon satirising the practice of vaccination.

Medicine and the Masses displays vaccination’s long and fascinating social history, the effects of which are still felt today.