Saturday 15 August 2020 marks the 75th anniversary of VJ Day (Victory Over Japan Day), the day that the Second World War officially ended following the Japanese surrender to the Allies. During this weekend we are remembering the contribution of some of the Royal College of Surgeons of England Fellows who served during the Far East campaign of the Second World.

Kennedy Burnside was born in Melbourne, Victoria, in 1913 to William Kennedy Burnsideand Edith Edwards Burnside. He studied medicine at the University of Melbourne and became a resident and registrar at the Alfred Hospital, Melbourne in 1938 and 1939. 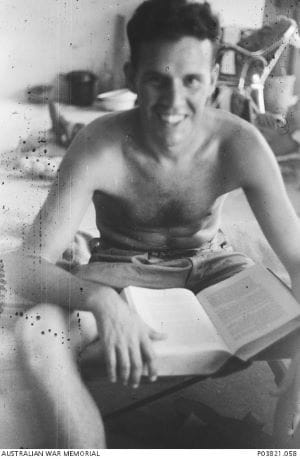 Above: 'Major (Maj) Kennedy Byron Burnside studies a book or medical textbook, while seated on a stretcher bed in his barracks at Changi prisoner of war (POW) camp...' Ca. 1942. From the Australian War Memorial website. Public domain.

As an Army Major and Commanding Officer of the 2nd Mobile Bacteriological Laboratory in Malaya, Burnside used an army truck as a pathology laboratory to study tropical diseases before his unit joined the 2/13th Australian General Hospital in Singapore. Burnside became a Prisoner of War (POW) when Singapore fell to the Japanese in early 1942. He worked as senior medical officer at a small POW camp where he was responsible for the health and wellbeing of 300 men before he and others were transferred to the infamous Selarang Barracks in the Changi Prisoner of War camp.

Following the surrender to the Japanese, the pathology truck was driven into Selarang Barracks Square. The equipment was transferred to a barracks building and a laboratory was set up to carry out basic clinical pathology, diagnosis and administration. The Selarang Barracks was originally built by the British army to accommodate 800 menin 1938 as part of the Changi Garrison, a heavily fortified coastal defence. During the war, the Selarang barracks housed nearly 15,000 men. 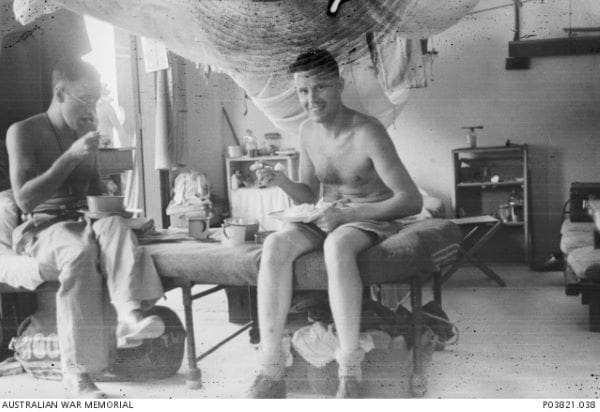 Above: 'Major (Maj) Kennedy Byron Burnside and an unidentified officer eat a meal seated on a stretcher bed in their barracks at the Changi prisoner of war (POW) camp...' Ca. 1942. From the Australian War Memorial website. Public domain.

While a POW Burnside not only kept up his ‘day job’ by running the small on site laboratory in the Selarang barracks, he also wrote a book on the management and prevention of malaria. He kept an ongoing diary which survives to this day and paints a vivid picture of life in captivity. In the diary he worked out the nutritional content of the rations the POWs received and confronted the Japanese with his figures. In his spare time Burnside studied mathematics and anatomy and became proficient in Japanese, Malay and French.

He also recorded prison life at the Changi Jail using a hidden 8mm Bell and Howell film camera and a 35 mm Leica camera. In August 1943, a change in the prison’s command structure led to a tightening of the camp's discipline and punishment regime. Burnside's negatives, cameras, and diaries were all hidden in abandoned 15-inch brass shell cases, along with many other Australian records. The items were buried according to astronomy and celestial star sightings, which were again used in September 1945 to unearth 12 of the 13 buried cases. Remarkably 74 photographic negatives survived the war and were processed thereafter. These photographs are now catalogued and available to view on the Australian War Memorial website. 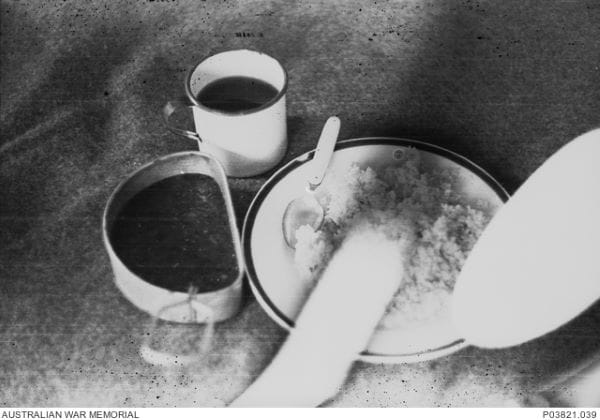 Above: 'A meal about to be eaten by Major (Maj) Kennedy Byron Burnside at the Changi prisoner of war (POW) camp...' Ca. 1942. From the Australian War Memorial website. Public domain.

Kennedy Burnside returned to Australia and the Alfred Hospital after the war and became a consultant urologist, teacher and writer. He maintained his interest in photography to the end of his life.

There are more stories to discover on the Library Blog. Read about the experiences of surgeons Doris Wallace who registered as a man and was given jungle training in India posted on Friday 14 August. On Sunday 16 August we share Julian Taylor’s story. He was a POW in Changi Jail who carried out remarkable surgical and medical procedures with negligible facilities and designed artificial limbs for soldiers using scrap material.

These stories for VJ Day are from Plarr’s Lives of the Fellows, the Royal College of Surgeons’ collection of biographies of deceased fellows, a unique record of the evolution of surgery and social history from the foundation of the fellowship (FRCS) in 1843. As an ongoing project, we review historical biographies and, where we have additional information, add to the accounts of the lives of surgeons. If you have more information on a fellow, please do get in touch.