Why you should love a leech: blood letting to microsurgery

Medicinal bloodletting has been practiced since the Stone Age. The popularity of leech therapy as a treatment has varied over time, but they still have a use in modern surgery.

The species of leech used for medicinal purposes is Hirudo medicinalis. Each leech can consume about 5 to 10 ml of blood at each feeding, almost 10 times its own weight. They have three jaws and a hundred teeth. As they bite, they inject an anaesthetic into the skin and their saliva contains anticoagulants which stop the blood clotting. 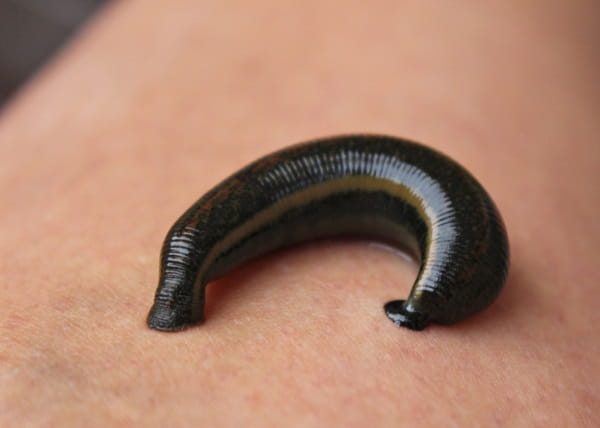 So why are surgeons using the leech therapeutically again? The medicinal use of leeches — scientifically known as hirudotherapy — re-emerged in the 1970s. Leeches have a useful function in reconstructive and microsurgery where they can relieve venous congestion. For example, when a surgeon reattaches a severed finger, it is much more difficult to repair the smaller veins than the large ones, so the finger can become swollen with blood. The hungry leech sucks out the excess blood slowly and steadily, which keeps the finger healthy while the veins knit together and heal. The anticoagulants keep the blood thin, so that clots don’t form and create problems. It’s an effective treatment with few side effects.

The history of the medicinal leech is fascinating. In antiquity, Pliny the Elder (AD 23–79) recommended leeches to treat phlebitis and haemorrhoids, while Egyptian medics believed the leech could help cure everything from fevers to flatulence. For centuries, patients were bled to restore a supposed imbalance in bodily humours. 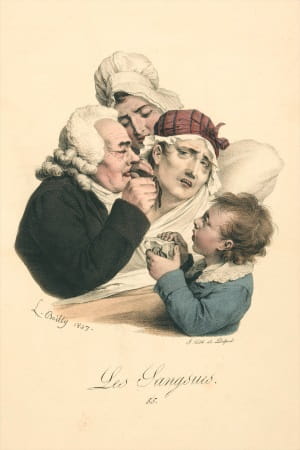 Humorism identified four humours that existed as liquids within the body: blood, phlegm, black bile and yellow bile. A good balance between the four humours was essential to remain healthy and an imbalance could result in disease. By the end of the Middle-Ages, doctors were using leeches to treat a wide range of disorders, including nervous system diseases, urinary and reproductive problems, inflammatory and eye diseases.

Right: A medical practitioner administers leeches to a patient. Colour lithograph after L. Boilly, 1827. From the Wellcome Collection, free to use with attribution (CC BY 4.0).

Medicinal leeching reached a peak in the 18th and 19th centuries. The theories published by the Napoleonic surgeon François-Joseph-Victor Broussais created a stir and a market for leeches. Leech trading became a lucrative business, with leeches exported across Europe and to the USA. France alone required millions of leeches annually. The use of medicinal leeches began to decline around the 1830s as diagnostic medical skills improved. John Haycraft’s publication, On the action of a secretion obtained from the medicinal leech on the coagulation of the blood (1884), showed that the blood in a leech's gut doesn’t coagulate and the isolation of this anticoagulant, hirudin, by Fritz Markwardt in the 1950s, ensured the continuing importance of the leech in medicine. 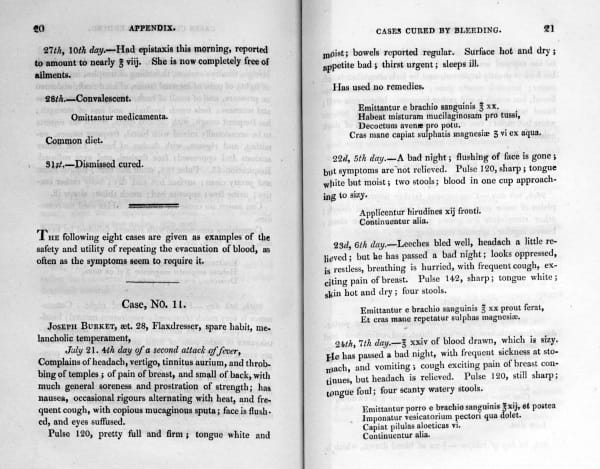 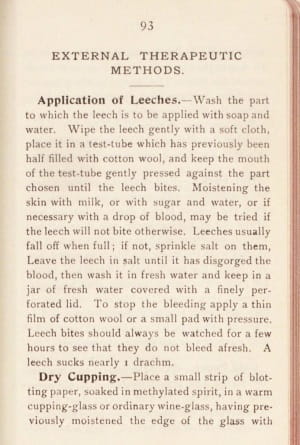 Many books and papers have been published over the years, and the subject is scattered throughout the RCS Library collections, as you would expect given the popularity of the treatment. Some of the 19th century material has been digitised as part of the UK Medical Heritage Library project. For example, A practical treatise on the efficacy of bloodletting, in the epidemic fever of Edinburgh by Benjamin Welsh looks at the evidence for using leeches in fever cases during an outbreak in 1819. He describes treatment of 44 individuals in detail, as can be seen in this extract on Joseph Burkett, a Flaxman (he survives). Welsh summarised his treatment: “Very sharp case. An excellent example of the efficacy of bleeding at a late period of the disease; instantaneous relief from the evacuation.” Further data is included on the environment, and tables covering age, symptoms and the number of leeches used are included. The leech continued to be used regularly, as this example from the 1916 King’s College Hospital Pharmacopoeia giving the procedure for applying a leech to the patient shows.

In the past, leeches were harvested from the wild and kept in leech jars filled with rainwater, which were often decorative. Leeches could be reused: you either waited until they’d digested their meal or persuaded them to disgorge the blood. Now to avoid infection, they are specially bred and grown for medical use and humanely disposed of after one use. Modern leech therapy has fewer applications than in the past, but is supported by scientific studies and case reports; research continues into their use in a number of medical fields.