Winnie-the-Pooh fans will have an opportunity to see the skull of the bear that inspired the much-loved character in A.A. Milne’s stories, at the Royal College of Surgeons’ Hunterian Museum.

Milne, who wrote one of the most popular collections of children’s stories: Winnie-the-Pooh and later The House at Pooh Corner, was a regular visitor to London Zoo. His son, Christopher, named his teddy bear Winnie after a Canadian black bear who lived in the zoo. Named Winnipeg, and Winnie for short, she was the inspiration for Winnie-the-Pooh. 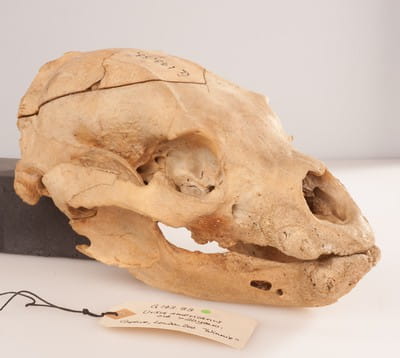 Visitors to the Royal College of Surgeons’ Hunterian Museum in London will be able to see Winnie’s skull and learn more about her.

Sam Alberti, Director of Museums and Archives at the Royal College of Surgeons, said:

“Winnie-the-Pooh remains one of the most popular children’s stories ever since Pooh Bear was brought to life on the pages of A.A Milne’s book in 1926.

“Children and adults who visit the Hunterian Museum will now have an opportunity to learn about the real Winnie and how she inspired A.A. Milne.

“Her story and presence in our collection are a reminder of how learning about animal health can enhance our understanding and care for species around the world.”

Soldier and trained vet, Captain Harry Colebourn bought Winnie when she was a bear cub, and he was en route to fight in the First World War. He had enlisted to look after the cavalry units and named her Winnipeg after his home city in Manitoba, Canada.

Cpt Colebourn’s regiment travelled to Europe at the beginning of the war and he brought Winnie as their mascot while they trained on the Salisbury Plain in Wiltshire. When the regiment was deployed to fight in France in 1914, he left Winnie at London Zoo.

Winnie lived through the war and was visited by A.A. Milne and his son Christopher. Photographs from this time show that Christopher was allowed in Winnie’s enclosure at the zoo. After the war, Cpt Colebourn donated Winnie to London Zoo, where she remained a popular attraction until she died of old age in May 1934.

During a recent review of the RCS’s collections, curators identified Winnie’s skull and the story of this treasured bear. Documents show that when Winnie died at the zoo, her skull was donated to Sir James Frank Colyer (1866-1954) the then curator of the Odontological Museum, which was part of the RCS collections. A dental surgeon, he was the first to report on dental variations and diseases in bears. He analysed a number of animal skulls from the Zoological Society of London to compile his comprehensive book on dental disease in animals (Colyer 1936. Variations and diseases of the teeth of animals).

At the time, Colyer noted in Winnie’s skull the loss of teeth, thickening of the alveolar process and sockets filled with bone. He associated this with Winnie’s extremely old age and her food habits. Recent examination of the skull shows that Winnie suffered from chronic periodontitis (an inflammation and/or loss of connective tissues supporting or surrounding the teeth). Colyer’s book, and the skulls featured in it (including Winnie’s), have now become valuable research specimens for biologists and zoo vets who need to treat captive animals for dental diseases.