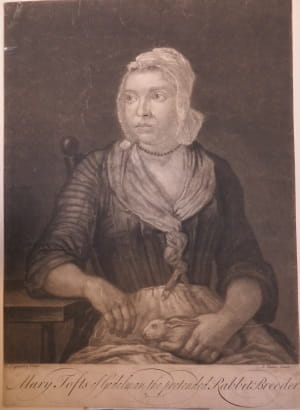 In 1726 Mary Toft, of Godalming in Surrey, England, achieved considerable notoriety throughout Surrey, and even over all England, by her extensively circulated statements that she bore rabbits. Even at so late a day as this, the credulity of the people was so great that many persons believed in her. The woman was closely watched, and being detected in her maneuvers confessed her fraud.

A refined late Victorian description of a far from delicate affair, the story of Mary Toft, the woman who participated in one of the most bafflingly farfetched fraudulent medical cases of the 18th Century. Along the way, she attracted the interest of some of the most high-flying doctors, surgeons, anatomists and scientists of the day. Those who set any store by her ludicrous assertions were soon to be openly derided, their careers left in tatters.

The case began in September of 1726, when Mary “gave birth” to her first rabbit and sent news of her plight around the local area until she had attracted the support of a local surgeon and man-midwife, John Howard. Over the course of the next three months, deputations were sent from London and even an interested King George sent one of his favourite physicians, the German Dr. Cyriacus Ahlers. Mary was, by now, birthing the rabbits at a rate of one a day! One of the doctors in attendance advanced the theory that the rabbits were forming in her fallopian tubes and jumping their way out… 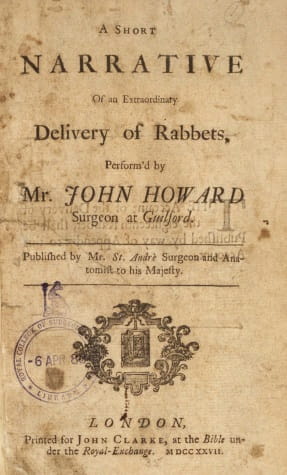 Ahlers appeared to be taken in and further medics were despatched to fetch Mrs Toft and her entourage to London for further examinations. Eventually, under threat of a rather medieval sounding operation to establish the case once and for all, Toft buckled, admitted her deception and was arrested for being a “Notorious and Vile Cheat” and sent to Bridewell prison.

To show the extent of discussion this case excited, at least fifteen pamphlets and songs appeared ridiculing what was described as a mass delusion. Among these were: by a “Gentleman at Guilford”, The wonder of wonders, or, A true and perfect narrative of a woman near Guilford in Surrey, who was delivered lately of seventeen rabbets and three legs of a tabby cat (1726) and Doctors in labour: a philosophical enquiry into the wonderful coney-warren, lately discovered at Godalmin near Guilford in Surrey (1726). The case was so colourful, and the commentators on it so various, that it became quite fashionable to make collections of the tracts and have them bound together in rabbit skin. 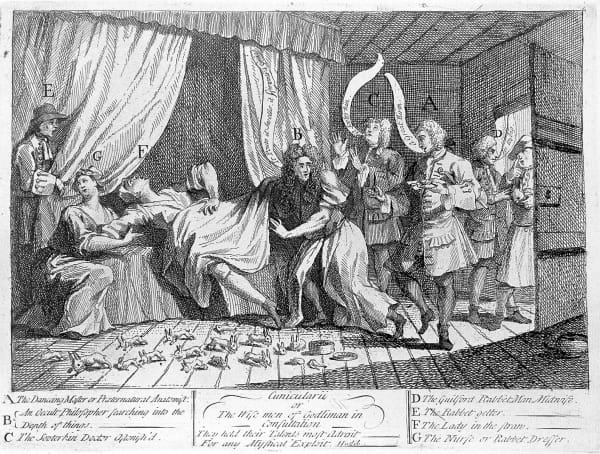 Mary Tofts duping several distinguished surgeons, physicians and male-midwives into believing that she is giving birth to a litter of rabbits. Etching by W. Hogarth, 1726. Credit: Wellcome Collection. Free to use with attribution. Creative Commons Attribution 4.0 International (CC BY 4.0).

Caricatures of the debacle were also produced, notably this one from Hogarth (courtesy of the Wellcome). For Todd (Dennis Todd, “Three Characters in Hogarth’s Cunicularii – and Some Implications”, Eighteenth-Century Studies 16: 1, fall 1982, pp. 26–46), Hogarth’s work is about Mary’s power in the situation:

Hogarth stages the hoax as a drama performed by Toft to a group of elite men (including four of the doctors) with a supporting cast of her husband and sister-in-law. The engraving mocks the doctors for their credulity. 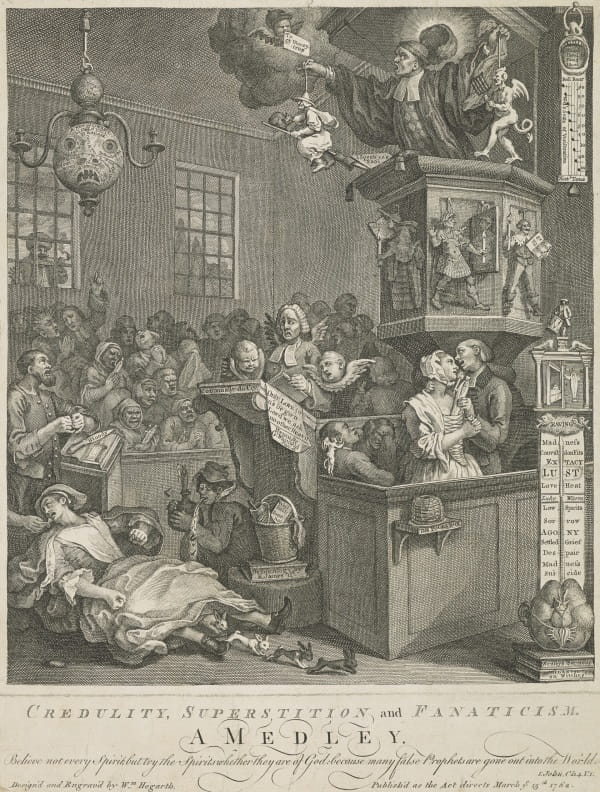 In another, less whimsical Hogarth image called “Credulity superstition and fanaticism” (courtesy of the National Galleries of Scotland), the rabbits leap forth while the message underneath the image warns us that “many false prophets are gone into the world”.

As for Mary, the case against her was dropped and she returned to Godalming where, shortly after, she had one more child, parish records showing it to be a perfectly normal and healthy girl. The case had captured public interest to the extent that it was still recounted for years afterwards. Charles, second Duke of Richmond, sometimes even “exhibited” Mary as a spectacle or curiosity at his residence in Godalming. In 1740, she had a further brush with the law when she was reportedly charged with receiving stolen “fowles”. Toft died in Godalming, and was buried there on 13 January 1763.

The Library collection has 7 pamphlets connected to the hoax, some of them written by the key players of this unusual farce. You can see the collection on SurgiCat+.