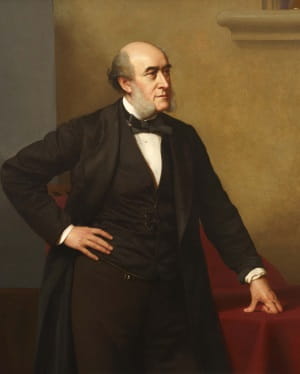 Sir William Fergusson lived his life during a period of great change and scientific discovery. Born in 1808, he started work in an Edinburgh lawyer’s office aged fifteen, but two years later he changed law for medicine, training in Edinburgh under the anatomist Robert Knox. He quickly became a skilled anatomist, and it’s said he spent 16 hours a day in the dissecting room. Working with Knox at this time, he unfortunately became involved in the scandal caused by Burke and Hare’s murder trial as they had sold bodies to Knox’s school. However, the episode didn’t affect his progress: he became a Fellow of the Edinburgh College in 1829, and was elected surgeon to the Edinburgh Royal Dispensary in 1831.

Marrying heiress Helen Rankin in 1833, he was appointed as Professor of Surgery to the newly opened King’s College Hospital in 1839, when he was just 32, remaining a surgeon there until his death. Fergusson was known to be ambitious and something of a dandy. He travelled about London in a bright yellow coach, called by his students ‘the mustard pot’, attended by two postilions and two well-trained Dalmatians. He was also an expert carpenter, violinist and fly-fisherman.

He was famous for the speed with which he operated on patients (removing a bladder stone in 30 seconds) – a great advantage in the days before anaesthetics. Until the middle of the nineteenth century, general surgery consisted largely in amputations of diseased or injured limbs and lightning slash-and-grab raids on bladder stones. These procedures inflicted intense pain on the patients. The introduction of ether anaesthesia in 1846 changed this, and Fergusson found himself in the happy position of benefiting from the new style of surgery where pain was abolished and speed began to play a less important part in the operation. He was called “the greatest practical surgeon of our time”.

With the beginning of anaesthesia it became feasible to attempt surgical procedures aimed at conserving or reconstructing diseased parts. Fergusson’s name is linked with operations on the harelip (he carried out at least 300 successful operations), excisions of joints, and amputations of limbs. He extended the principle of ‘conservative’ surgery, preserving parts of the body which would otherwise have been amputated, and revived the neglected operation for cleft palates. Fergusson’s practice grew rapidly, and the fame of his operative skill brought many students and visitors to King’s College Hospital.

He published papers on surgical operations and cases throughout his career, and wrote The Progress of Anatomy and Surgery in the Nineteenth Century (1867) and A System of Practical Surgery (1842), which went through several editions. He invented and made his own instruments, such as the ‘lion’ forceps, bent knives and mouth-gags for use in cleft palate operations. Examples of instruments he used or designed are held in the Hunterian Museum’s collections. Fergusson owned these lithotomy knives: his initials are craved into the handles. 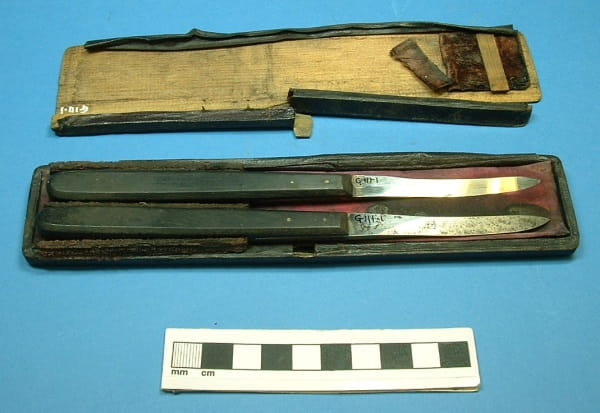 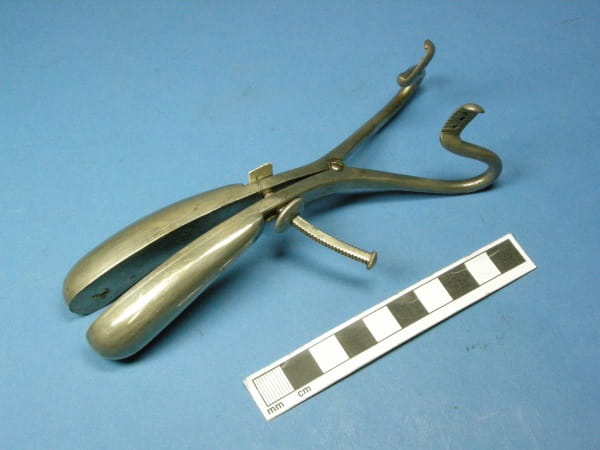 Appointed Surgeon-in-Ordinary to Prince Albert in 1849, he became Surgeon-Extraordinary in 1855, and Sergeant-Surgeon to Queen Victoria in 1867. He was elected to the Council of the Royal College of Surgeons in 1861, becoming an examiner in 1867, and President of the College in 1870. As professor of human anatomy and surgery, he delivered two courses of lectures before the Royal College of Surgeons in 1864 and 1865, and the Hunterian Oration in 1871. He was made a baronet in 1866. Several of his works are held in the Library collections.

Fergusson was a tall man with great presence and handsome features. A kindly man who never lost his Scots accent, Fergusson must have exuded confidence to his patients. When he died in 1877, his obituary in The Lancet stated: “Few men equalled and none probably surpassed him as an operator”.

If you are interested in reading a contemporary account of his life, Sir William Fergusson: a biographical sketch by Henry Smith (surgeon to King’s College Hospital) 1877 has been digitised as part of our contribution to the UK Medical Heritage Library project.