The village bells ring merrily
The milk maids sing so cheerily,
With flow’ry wreaths and ribbons crown’d
Now May Day comes its annual round;
The may-pole rears its lofty head,
Round on the turf they dance and play;
And shun their dance, and festive lay.

Anne Hunter was born in March 1742 in Waterford, Ireland. She was the eldest daughter of the military surgeon Robert Byrne Home and his wife Mary Hutchinson. Anne married the eminent surgeon, John Hunter in July 1771 and they had four children, two of whom died in infancy.

Anne’s brother Everard Home was apprenticed to her husband as a surgeon. Her husband's sister, Dorothea, was widowed in 1778, and Dorothea and her children subsequently moved to London a few years later. Anne Hunter proved an inspiration to her young niece, Joanna Baillie, who devoted herself to writing poetry and drama.

Anne was a serious poet, often writing quite gloomy poems. Her poems are ballads, odes, or songs exploring romantic and domestic themes. Some exist only in manuscript but many were published in her collected Poems which appeared in 1802. 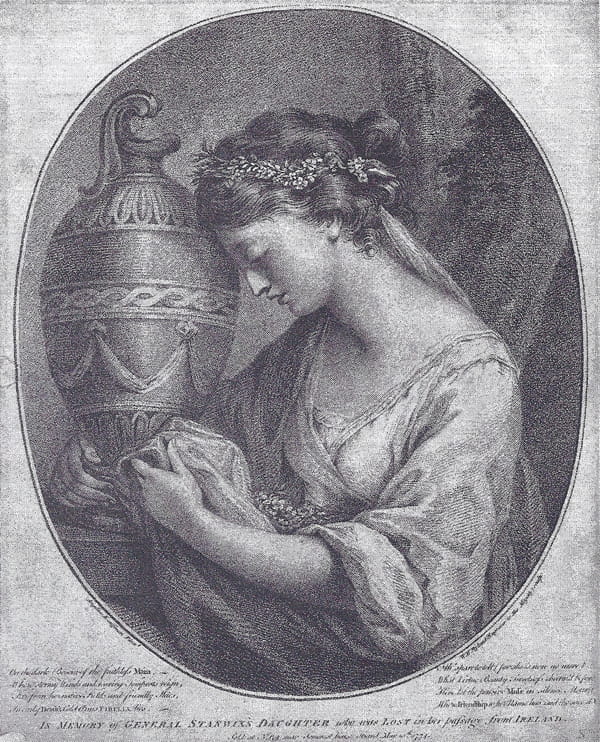 ‘Anne Home as The Pensive Muse in 1767 before her marriage to John Hunter.’ Engraving by W.W Ryland, after a lost portrait by Angelica Kauffman. Public domain. From the Wellcome Library, London.

Anne first earned public attention as a songwriter when an early piece, ‘Adieu ye streams that softly glide,’ was published in two songbooks, The Lark (1765) and The Charmer (1765):

Adieu ye streams that smoothly glide,
Through mazy windings o’er the plain,
I’ll in some lonely cave reside,
And ever mourn my faithful swain;

John and Anne Hunter had a long engagement but they eventually married on 23rd July 1771 and they spent their honeymoon at Earl’s Court. They moved to Leicester Fields (later Leicester Square) in 1785. John was doing so well that he was able to buy a 24-year lease on two houses. Publicly, Anne did achieve success and her poems were widely distributed, but some of her private poetry expressed episodes of deep personal unhappiness. The new house should have lifted her spirits but it did not and some of her poems began to contain images of loss and fear reflecting her growing feelings of unrest. The poem, ‘November (1784)’ exemplifies this:

November hears the dismal sound,
As slow advancing from the pole;
He leads the months their wintry round;
See black’ning clouds attendant roll,
Where frowns a giant band, the sons of care,
Dark thoughts, presages fell, and comfortless despair!

Later Anne attended some meetings of the ‘Bluestockings’ group which was led by hostess and critic Elizabeth Montagu along with Elizabeth Carter and Mary Delaney. In the autumn of 1786, Anne started her Thursday evening parties and her home became a centre of literary and intellectual life.

William Clift from Cornwall arrived at the Hunter household in 1792. He had been recommended to John by Anne’s friend, Nancy Gilbert, who having noticed his drawing thought he would make a good apprentice. This was a pivotal moment as it is because of Clift’s notes and letters, which are preserved in The Royal College of Surgeons of England Archives, that so much is known or can be gleaned about Anne’s later life as well as John’s collections after his death. The papers can be found in the Archives MS0233 and MS0007/1/5/8.

Anne began to publish her poetry anonymously in the 1790s, and later published two collections, Poems (1802) which can be found at the Royal College of Surgeons of England and The Sports of the Genii (1804), where the author is named as Mrs. John Hunter. John Hunter died in 1793 following a heart attack. The will he left was complicated to the extent that Anne ended up being ejected from their house and only survived with a pension from the Queen. In January 1800, John Hunter’s Collection was purchased by the Government for £15,000. Eventually Anne received some of the proceeds of the estate, and later when Parliament voted to establish a Hunterian Museum and established it for The Royal College of Surgeons she was awarded quite a generous amount and with the pension was subsequently able to live more comfortably. Portrait of John Hunter by Joshua Reynolds, unsigned, 1786. From The Royal College of Surgeons of England, RCSSC/P 121.

Joseph Haydn came to London in January 1791 and gave a series of concerts. These were very successful and attended by many fashionable people, including Anne. The two met and collaborated on several projects, including the lyrics for his Six Original Canzonettas (1794), in which the words for all six songs in the first set were written by Anne. She also penned some of the lyrics for his Second Set of Canzonettas (1795), and the words for two of his songs, ‘The Spirit’s Song’, which Haydn thought could have been written by Shakespeare, and ‘O Tuneful Voice’.

O tuneful voice I still deplore
The accents, which tho’ heard no more
Still vibrate on my heart
In Echo’s cave I long to dwell
And still to hear that sad farewell
When we were forc’d to part. 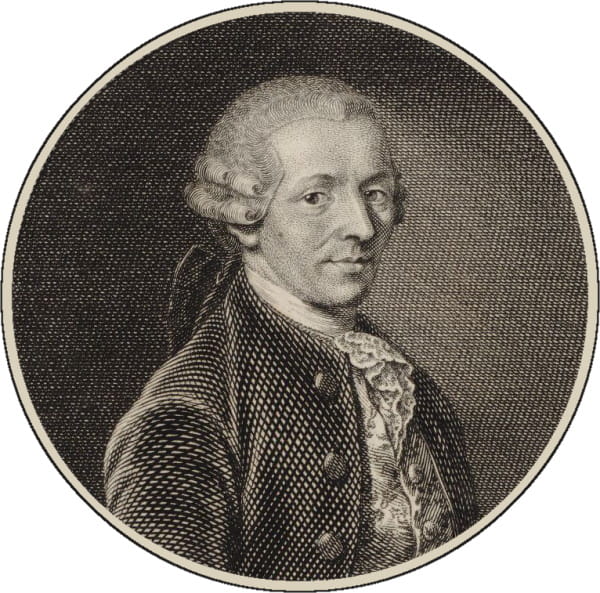 Anne Hunter wrote many poems which Haydn put to music. Some of these are included in Poems volume 3, MS0014/15, which are kept in the Archives of The Royal College of Surgeons of England.

This volume is titled Songs written for Music between the years 1762 and 1815 – 1818. The volume contains 76 pages, of which the first four are numbered by Anne Hunter. The volume also contains the sentimental song ‘My Mother bids me bind my hair’ which was set to music by Haydn.

My mother bids me bind my hair
With bands of rosy hue
Tie up my sleeves with ribbons rare
And lace my bodice blue. 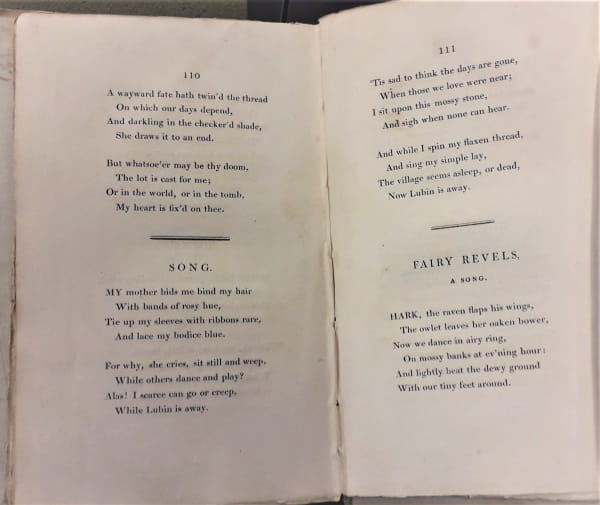 In 1803 or 1804, during her widowhood, Anne wrote an alternative libretto for Haydn’s Creation, which covers hefty themes such as the meaning of life and the purpose of humankind and depicts an attempt to render the sublime in music. The libretto is based on Milton’s Paradise Lost and it also includes some verses from The Book of Genesis. The manuscript copies of the libretto are in the Archives of the Royal College of Surgeons of England. They can be found at MS0014/17. The volume contains six manuscript pages, two letters, and nine pages of the libretto in typescript. The manuscripts were presented to the College in 1923 by Miss Hunter Baillie. The study of these manuscripts suggests that Anne did not write an original libretto, instead she read the published version of 1800 and felt she could improve it. 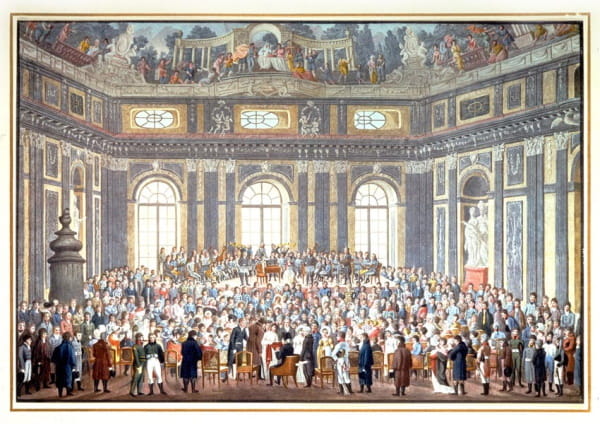 Colour print, from 1909, of a watercolour on the lid of a stationery box made by Balthazar Wigand and presented to the composer Joseph Haydn (1808). It commemorates Haydn's attendance, in extreme old age, of a performance of his oratorio The Creation. (The composer can be seen seated in the lower centre of the image, wearing wig and hat.) The original of this picture was lost in 1945. This was not Anne’s version of The Creation. Public Domain. From Wikimedia Commons.

On 15 September 1993, Anne’s version of The Creation had its first performance at The Royal Festival Hall in London, at a concert commemorating the bicentenary of John Hunter’s death. A cassette of this performance and a souvenir programme can be found in the Archives.

Anne’s main friend and supporter during her old age was her niece, Joanna Baillie. It was through Joanna’s influence that many of Anne’s poems continued to be published in anthologies. Anne Hunter died on 7 January 1821, aged 79. She lives on today arguably more in Haydn’s songs than in anthologies of poetry. Sadly there is no evidence that Haydn ever saw the version of his Creation, written by Anne.

When the Hunterian Museum opens in 2023, visitors will be able to hear in one of the galleries specially commissioned recordings of two of Haydn’s Scottish Songs played on a contemporary 18th century Blackwood piano and a recording of Joanna Baillie’s English guittara. The recordings were made with the collaboration of the Royal College of Music Museum.

Some research taken from The life and poems of Anne Hunter : Haydn’s tuneful voice by Caroline Grigson, 2009.