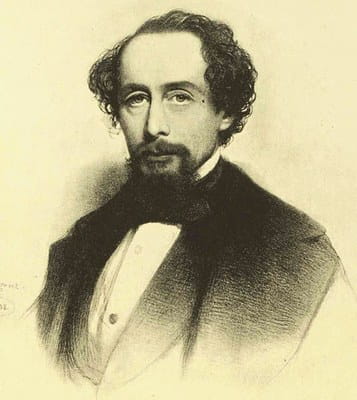 On Monday, the 13th of July, there was a very exciting news story for those interested in Victorian literature. An academic and book dealer, Jeremy Parrott, has discovered Charles Dickens’ own annotated copies of All Year Round. All Year Round (1859-1895) was a Victorian periodical edited by Dickens in which all the articles were published anonymously. The annotated books discovered by Parrott list the authors of these articles, revealing for the first time their true identities.

Our library contains some of these works in our series of tracts, with the College mainly collecting articles which relate to medical matters in some way, including works such as A new disease? (TRACTS 1912(3)) and An important matter (TRACTS 1885(18)), which dealt with vaccination. We also hold a tract from All Year Round which is entitled Royal College of Surgeons (TRACTS 1931(21)), though this was published after the death of Charles Dickens, when Charles Dickens Jnr held the role of editor. 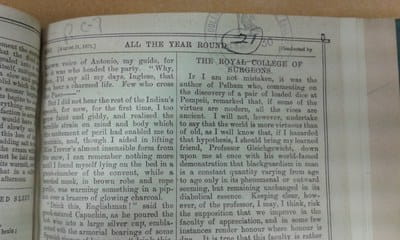 The article goes into quite some detail about the Hunterian Museum, listing some of the items the author found most interesting, including the cast of Dr Livingstone’s arm injured by a lion and the carriage shaft pulled out of the chest of a man who returned to perfect health.

Significantly, this is not the only article published about the Hunterian in a Dickens publication. Dickens produced a periodical prior to All Year Round. Entitled Household Words (1850-1859), it also included an article about the Hunterian. Both articles make for very interesting reading for those of us fascinated by the history of the museum and its collections.

The author of the Household Words article is clearly a big fan of the museum, using the article to call on the English Government to provide funding for the museum in general and to allow for the skeleton of a whale to be added to the collections. Dickens Journals Online attributes the work to Frederick Knight Hunt. Before becoming a journalist, Hunt had studied medicine and had become a Member of the Royal College of Surgeons and would have been familiar with the museum and its treasures.

With this new discovery by Parrott it will be exciting to find out if any of the possibly newly-identifiable authors of some of the other tracts we hold had any links to the College.

These tracts will also soon be digitised and made freely available online as part of the UK-MHL project previously mentioned on the blog.