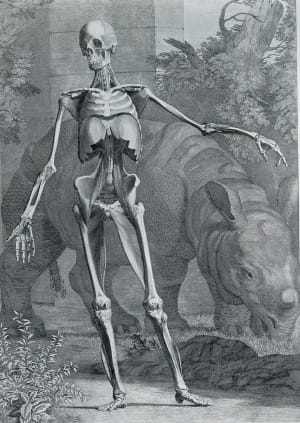 Bernhard Siegfried Albinus was born in Germany in 1697. The son of Bernhard Albinus (1653–1721), a physician, he would go on to become one of the most famous anatomists of the eighteenth century.

He studied in Leyden and also trained further in Paris before returning to Leyden, in 1721, to teach surgery and anatomy becoming one of the most renowned teachers in Europe. He studied, in minute detail, the bones and muscles in order to perfect the accuracy of anatomical illustrations.

He is most famous for his publication Tabulae sceleti et musculorum corporis humani, which was published in Leyden in 1747 and from which these illustrations are taken. The artwork and engravings were done by Jan Wandelaar (1690-1759). Working together, Albinus and Wandelaar devised a method of increasing the accuracy of the illustrations by placing nets with square webbing at specific intervals between the artist and the anatomical specimen and copying the images using the grid patterns. While the drawings were made under Albinus’s direction, Wandelaar had free range to draw the landscapes, architecture and lush backgrounds. One of the best known drawings displays a rhinoceros grazing in the background, which was the first example of its species imported into Europe. 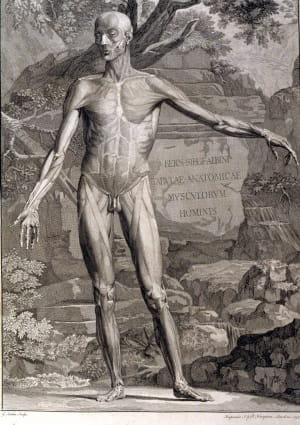 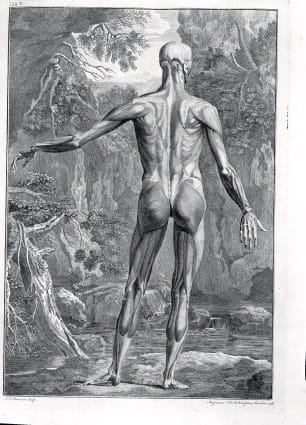 The work produced, with its copperplate illustrations, was artistic, beautiful and anatomically accurate. An English translation of the text of the book was published in London in 1749, titled Tables of the skeleton and muscles of the human body.