Daniel Defoe - The history of the Devil: ancient and modern in two parts with a description of the devil's dwelling (1793) 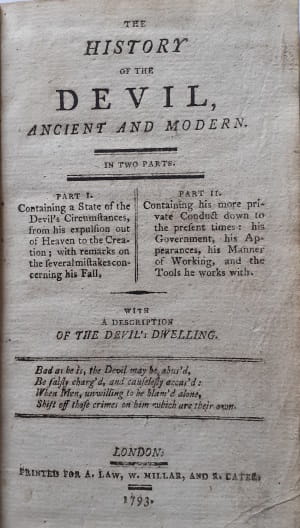 Everyone knows Benjamin Franklin’s quote “the only things certain in life are death and taxes”, but not so many people realise he adapted it from Daniel Defoe’s book, The political history of the Devil.

Things as certain as death and taxes, can be more firmly believ’d.

In turn, Defoe may have first seen the sentiment in an earlier work: The Cobbler of Preston by Christopher Bullock (1716).

’Tis impossible to be sure of any thing but Death and Taxes.

This interesting book is an unusual title to find in a medical library. First published in 1726, the book is divided into two parts. The first covers the history of the devil from his fall from heaven until the time the book was written, and the second his private conduct during that time. It was one of a trilogy of books Defoe wrote towards the end of his life, that address various occult subjects. Defoe specifically discusses the history and influence of the Archfiend, Satan, and his impact on human history in this book which is also known as “The political history of the Devil”. 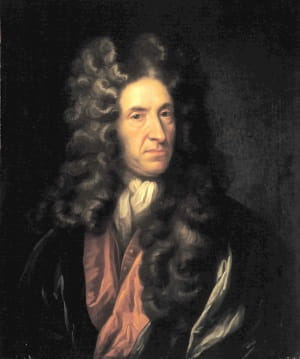 Daniel Defoe was born and died in London (1660-1731) and he led a very full and varied life. At different times he was an English trader, writer and journalist, political agitator, spy, prisoner and occasional tax collector. He is most famous for his novels Robinson Crusoe and Moll Flanders. The Library also has a copy of his A journal of the plague year, an account of one man's experiences of the year 1665, which is rather less surprising.

Defoe was a Protestant Dissenter and strongly anti-Catholic. In the book, he suggests that the Devil influences mankind through human agency as well as assuming a physical form in the world. He speculates that the Devil has reacted to changing times by moving his influence from the supernatural (witches) to the ordinary world of “beaus, beauties, wits, and fools”. Although the work deals with serious themes that would have concerned his contemporaries, Defoe imbues it with irreverence and irony.

The book provides a vivid view of politics and society in the early eighteenth century, as the Age of Enlightenment dawned with new ideas about theology and reason. Defoe’s History of the Devil was the first in a trilogy that included System of Magick (1726) and Essay on the History and Reality of Apparitions (1727).

Age and use have started to affect our copy of History of the Devil and it is in need of conservation. The spine is worn and damaged at the head and tail, the boards are worn, hinges and joints are cracked and the pages are brittle with slight foxing. It is just one of the rare books from our collections which are in need of conservation. In 2013, the Conserve our Collections scheme was launched and it has been invaluable in enabling us to preserve some of the treasures in our collections. Your donations will help us to preserve these books for future generations to study and view in their full glory.

Find out more information about the scheme and how you could help.