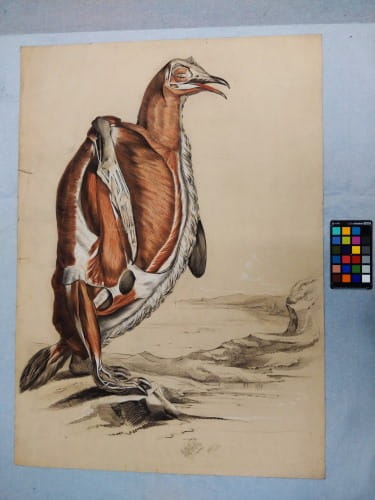 William Henry Fisk was a successful Victorian painter and teacher. Taught by his father, William Fisk (1796–1872), he went on to study at the Royal Academy. Fisk was a skilled draughtsman and as such was appointed as an anatomical draughtsman to the Royal College of Surgeons in the 1840s.

As part of the preparations to move the collections while the Lincoln’s Inn Fields building is redeveloped, staff are creating inventories and cleaning objects before packing. One of the rediscovered treasures is a portfolio containing a number of Fisk’s anatomical drawings. The portfolio contains a number of large drawings created in 1843/1844 using coloured pencils with watercolour highlights showing the muscle structure of birds and chimpanzees.

There are four wonderful, naturalistic drawings of a flayed penguin, showing the muscle structure from different angles. Our penguin stands proudly on the shore with the coastline curving away behind him. Created in 1844, it is late for this naturalistic style of anatomical drawing to be used, setting the subject in an imagined background. This style of biological illustration easily communicates the bird’s anatomical structure while giving a feeling of the environment it lives in. The drawings have both artistic and anatomical value. 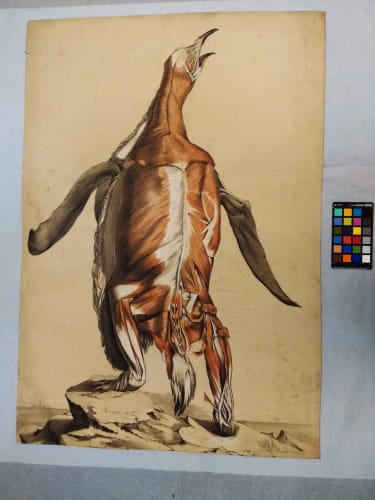 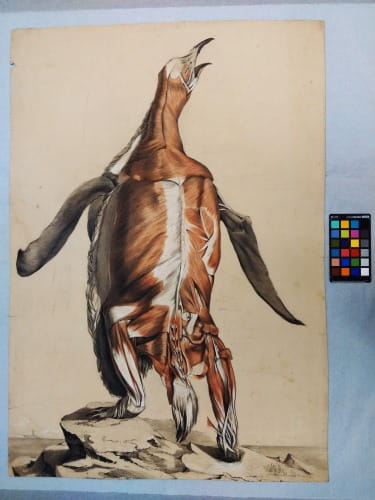 Paper Conservator, Kostas Tsafaridis, cleaned the drawings last year and the images above show the difference this has made. The undecorated areas of the drawings were cleaned using a chemical sponge, which is wiped across the surface of the paper. The coloured areas of the drawings need a different technique. A good quality artist’s eraser is grated to create crumbs: these are moved gently in a circular fashion over the picture, lifting the dirt from the surface of the fixative Fisk used to protect the coloured areas. 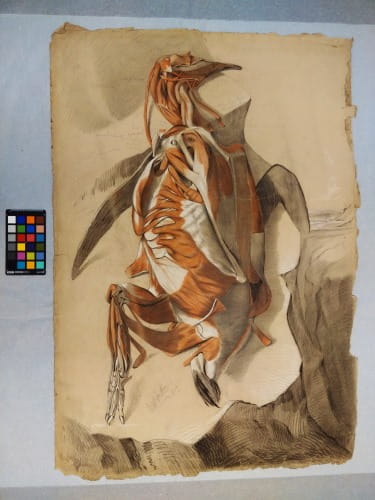 Fisk’s first exhibit took place in 1846 after the Royal College of Surgeons’ drawings were made. In 1850, he exhibited at the Royal Academy for the first time. He continued to exhibit paintings of landscapes and historical subjects there until 1873, occasionally showing his work at other London exhibitions and in Paris. He was invited to Balmoral to paint watercolour views for Queen Victoria, the first of several of artists. Four of these paintings were selected for inclusion in her souvenir albums.

During the 1860s, Fisk was one of the established contemporary artists approached by the South Kensington Museum (now the Victoria & Albert Museum) to produce portraits of great artists to decorate the South Court. His painting of Ghiberti was produced as a mosaic and his work can still be seen at the museum. The style of the work is very different from that of the anatomical drawings he produced at the Royal College of Surgeons. 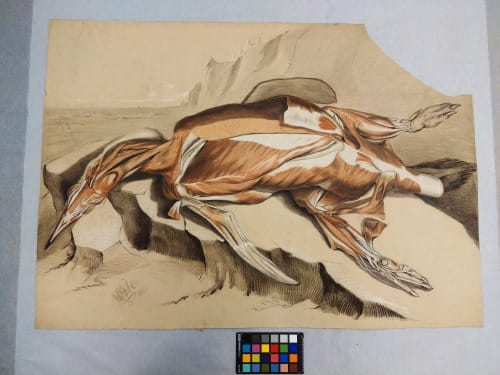 He was a successful lecturer, teaching drawing and painting at the University College, London, as well as contributing articles on painting to the press. His lectures on the practical aspects of art attracted large audiences both in London and in the Provinces. It was a varied and interesting career.