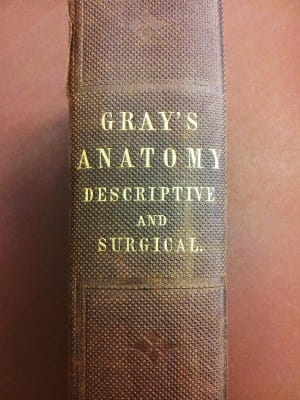 In 1855 Gray and Carter embarked on their second collaborative book, a monumental work covering the anatomy of the whole human body, designed for medical students and qualified surgeons alike. Henry Gray originally produced Anatomy: Descriptive and Surgical as a dissection manual, but his work, known today as Gray’s Anatomy, is now regarded as the most comprehensive account of current anatomical understanding available. Over the years editions charted not only the history of medical knowledge and imaging techniques, but also the changing styles and techniques of medical illustration. The first edition was published in 1858 and to date 40 further editions have been produced. Henry Vandyke Carter brought the text of the book to life with images characterised by their clarity and quality. The illustrations were key to securing the huge success of the work. Some were so perfectly conceived that they were reused for many editions, indeed the last use of one of Carter’s original drawings was ‘Development of the sacrum’ in the 39th edition (2005).

Why was it so influential?

Apart from clear illustrations what made the work so important that it has never been out of print (almost 160 years) since it was first published? What Carter chose to leave out, as much as what he chose to show was of equal importance. His editing of the structures he was drawing to emphasise what was of functional and practical importance to the dissector, student, and surgeon made the book indispensable to its readers. This editing was important in itself and it complemented Carter’s ground-breaking incorporation of the anatomical terms into the image, therefore negating the need for a separate and cumbersome key. The first-hand knowledge Carter needed to make such lifelike illustrations came from the access he had, through his work at St George’s Hospital Medical School, to dissection. Gray and Carter worked together in the dissecting studio at St George’s to dissect bodies obtained via the Anatomy Act.

Where do the specific links between the book and the RCS lie? 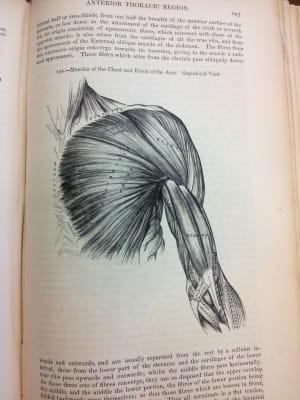 Gray’s Anatomy is of great significance not only to the history of anatomy but the history of the Royal College of Surgeons of England itself. There are strong links between Gray, Carter and the RCS. Gray was awarded prizes by the College for anatomical essays, and Carter was a student in anatomy at the College, working at the Hunterian Museum with such influential figures as Curator, Richard Owen, and Conservator, John Quekett. The College Archives hold some of Carter’s India paper proofs of the engravings for the first edition of Gray’s Anatomy. The images mounted on sheets are the very first set of proof impressions taken from the boxwood blocks produced by engravers Butterworth and Heath for the 1st edition. These were donated to the RCS in August 1923 and are undoubtedly unique, near original material. Henry Vandyke Carter drew directly on to the printing blocks [in reverse] and the images for printing were then cut directly from his drawings. No set of preliminary drawings survives, making these proofs even more significant.

Left: the muscles of the chest and front of arms.

How complete is the collection of editions held by the RCS Library now?

In January 2015 the RCS holdings of Gray’s Anatomy was reviewed and assessed for significance. It was noted that the RCS appeared to hold more editions than any other library in the UK. Nevertheless, the set was still short of a few editions, so we have been actively filling the gaps since then to strengthen the collection. The first step was to appeal to College members. This produced donations of the 1938, 1962 and 1980 editions. We then looked to see if the remainder were available for purchase.

The PRISM Fund grant for the 3rd 1864 edition 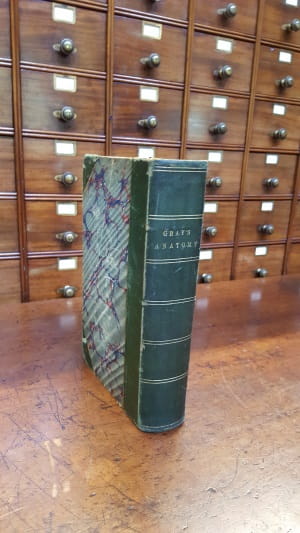 This particular purchase furnished the collection with the earliest missing edition, which was an extremely rare find in good condition on the open market. With Arts Council England support the Library acquired this significant historical item from a bookseller in the USA, taking it one step closer to obtaining the entire Gray’s collection of anatomical literature. The 3rd edition (1864) had not changed hands for sale at auction for 25 years prior to the College purchasing it and evidence from OCLC suggests that only 17 other libraries in the world hold this version.

Right and below: the 3rd edition of Gray's Anatomy. 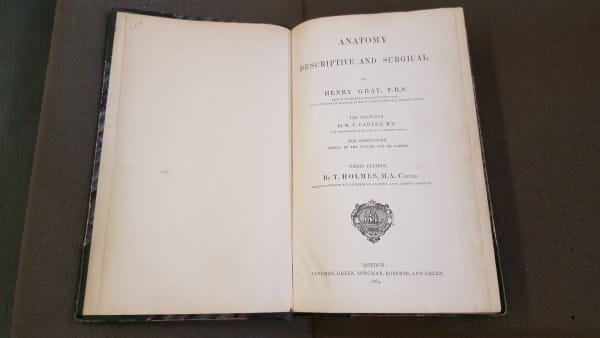 In addition to the generous donations from members, Library staff also sourced the last three copies. The final gaps for the 23rd edition 1926, 26th edition 1935 and 34th edition 1967, were tracked down on Amazon and eBay respectively, in the last quarter of 2017. This means that through donations, purchases and the key support of the grant from ACE RCS now holds a very unusual complete run of UK editions of Gray’s Anatomy, which appears not to be replicated in other UK medical reference libraries, or the British Library itself. At the RCS this is supported by holdings of other works authored by Henry Gray and a few sample editions of the US version of the Anatomy and of ancillary, more recent publications such as Gray’s Anatomy for Students. Moreover, the second of the College’s two copies of the 1st edition (Copy B) appears to be extremely rare and possibly unique among library copies in that it remains in its embossed brown cloth binding, just as it was purchasable for 28 shillings for use by a student in 1858. The Hunterian Museum also contains a wet dissection specimen attributed to Gray, which shows his careful dissection technique, and ability to display what he wanted his examiners/students to see. 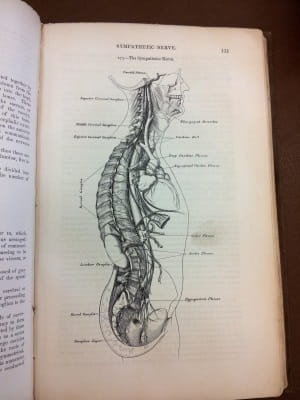 Starting out in black and white, the first full colour edition did not appear until the 40th edition in 2008 while the latest edition (2015) and accompanying website use every modern imaging technology available to enhance the illustrative side of the work. As Standring notes in her preface to the 40th edition “anatomy is currently enjoying a renaissance at the postgraduate level. A detailed knowledge of clinical anatomy which would have been undreamed of in the first edition, is now essential for clinicians working in technologically driven fields such as imaging, endoscopic and robotic surgery.” It seems the demand for detailed anatomy has shifted to suit modern medical techniques, the current edition and website providing the means of showing anatomy ‘in action’, as realistically as possible. But technology aside, the spirit of Gray and Carter’s work lives on in the exhaustive efforts of dedicated teams of editors and contributors who have strived to supply a one stop anatomical manual with the clearest images and the most illuminating text that each edition could provide, working from a high point of excellence produced in 1858. Now for the first time in the UK all of these editions have come together to allow an unrivalled research opportunity that spans objects, printed and archival material and truly can be regarded as a world class collection.